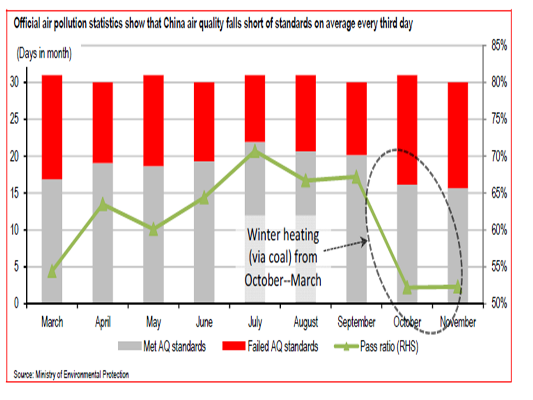 “THE mountains are high and the emperor is far away,” is a well-known phrase in China, which has been applied to many areas of legal enforcement.

“The refinery in, say, Shanxi province might have installed a de-sulphurisation unit, or at least something that looked like such a unit,” an “old China hand”, who has returned home to the US, told the blog earlier this week.

“They would turn it on for the benefit of the annual inspection by some underpaid, overworked and often bribed environmental protection officer. And then, as soon as the inspector left, they would turn the unit off again.”

But last year marked a turning point, according to HSBC.

“2013 turned out to be the year of environmental protection in China, driven by new leadership, growing public disquiet over pollution and tougher enforcement,” wrote the bank in February 2014 report on China’s environment and its steel industry.

“Following the air pollution debacle, groundwater outcry and official acknowledgement of ‘cancer villages’, more stringent environmental initiatives such as enhanced emission limits for industry and tighter fuel and vehicle standards have been put into place.

“For HSBC’s Climate Change team, the positive surprise was the change in enforcement which for a long time has been the weakest link in forcing change through.

“The proposed amendments to environmental laws as well as moves to achieve greater compliance were a welcome change.

“However, this was just the beginning. In 2014, we expect more policies and enforcement tools to be rolled out to stem the deterioration in the environment.”

This underlines our belief that China’s new leaders really do mean business on a wide range of reforms. An indication of this is their willingness to admit the scale of the problem, as illustrated by the chart above, which shows official air pollution statistics from last year. Can imagine such a chart being published ten or even two-and-a-bit years ago?

Combusting coal for power generation is one of the main causes of the most visible of pollution problems –air quality that is so bad that Beijing has become “almost uninhabitable for humans”. There are apparently other cities in China where the air quality can be even worse.

Thus, the HSBC report adds that:

We would add that many of the coal-to-olefins (CTO) projects planned out West will, as a result, not happen – not only because of air pollution, but also because of their voracious consumption of water. CTO production forecasts are right now being revised down.

It isn’t going to be a smooth trajectory because, obviously, the mountains haven’t become lower and Beijing hasn’t moved that much closer to any of the provinces, despite the unsustainable development of its suburbs.

But we believe that the overall direction will be relentless.

Cynical domestic and foreign investors will, thus, no longer find it anywhere near as easy to locate their sub-standard technologies out west, in order to avoid environmental scrutiny.

And as China’s entire growth model is dismantled and replaced with a new one, which of course involves changes far wider than just cleaning-up the environment, “conventional” economic growth will suffer.