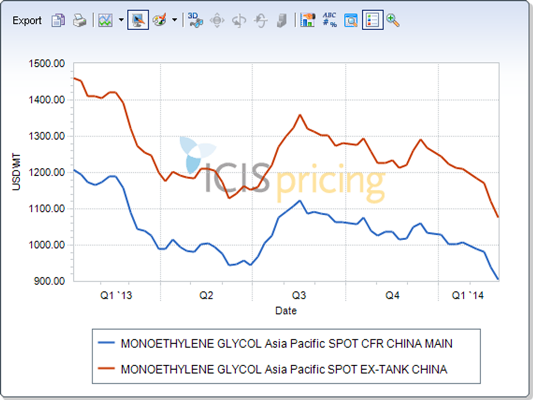 SOMETHING very disturbing is going on in China’s mono-ethylene glycol markets (MEG), which, we, think, reflects the following:

This helps to explain why in January 2014, China imported around 936,000 tonnes of MEG compared with approximately 716,000 tonnes in January of last year, an increase of some 30%, according to Global Trade Information Services.

But this is obviously just one of month of data and January is often an unusual month for data because of the distorting effects of the Lunar New Year (LNY).

The LNY fell on 31 January in 2014 compared with 10 February last year, which means that inventory building ahead of the holidays was brought forward in many chemicals and polymers. Thus, more cargoes were booked in December 2013 for arrival the following January than in the previous December.

Still, though, if the surge of imports was mainly down to the LNY distortion, why is it that China eastern coastal inventories of MEG rose by a further 2,000 tonnes last week to an all-time record high of 1.14m tonnes, according to our colleagues at ICIS pricing?

China may, of course, still “blink”. This remains the base case for many chemicals and polymers producers.

We should get a clearer idea of whether another “blink”  is going to happen on Wednesday, when Premier Li Keqiang presents his annual work report to the National People’s Congress – China’s annual parliamentary meeting. The report will further outline plans for the economy following the announcement of a major new reform agenda last November.