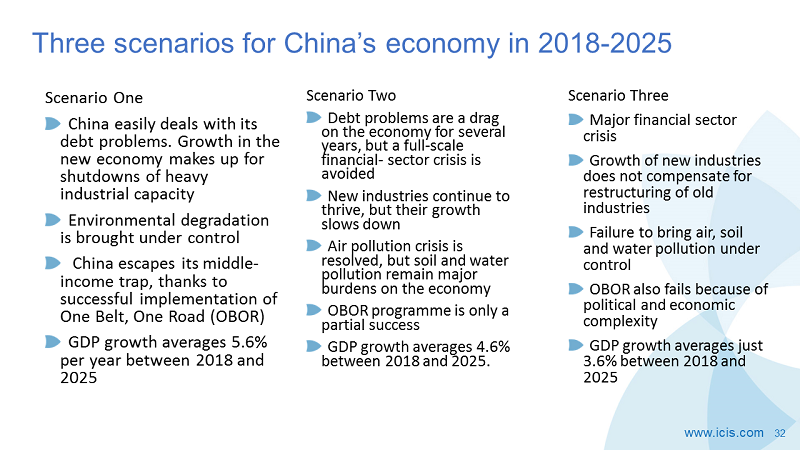 I SEE three Scenarios for Chinese economic growth, and so of course petrochemicals demand growth, in 2018-2025. See below where I detail how these three Scenarios would affect growth in demand for polypropylene (PP).

But first of all, let’s deal with the issue of the 19th National Party Congress meeting, which begins in Beijing this morning. This is China’s most important political meeting for at least five years with its outcomes set to have a major bearing over whether we see Scenarios One, Two or Three.

Scenario Three could be more likely if Xi strengthens his position

A lot of the Western media commentary ahead of the Congress was about how “strongman” President Xi Jinping would probably further consolidate his already firm control over the country.

I believe that the context behind this commentary is what is happening in several countries in the West. Right wing demagogues appear to have either taken complete control of governments or have won enough votes in recent elections for them to heavily determine the political direction of coalition governments.

People are very worried that the next phase in the West could be the increasingly erratic and arbitrary exercise of power by “anti-democratic virtual dictators”. There is a risk that this would lead to social, political, economic and geopolitical chaos.

A parallel thus is being drawn between events in the West and Xi’s consolidation of power since he came to office in 2012. Such parallels may, though, miss the point.

For all the faults of any over-centralised government (what political system is perfect?), China might need more effective central government control at this stage of its economic development.

It has to clean up its environment as this represents the single biggest threat to its continued economic prosperity. What if local government officials are allowed to defy new directives from Beijing? And what if top officials at state-owned enterprises do likewise?  China will then surely fail to adequately detoxify its air, soil and water.

Xi has already shown his determination to stop this from happening through an environmental campaign that has led to the disciplining of some 12,000 local government officials for failing to follow air-pollution standards.

How do you also get economically inefficient manufacturing plants to shut down if local government officials and corporate executives are again pulling in the opposite direction?

Many of the companies running these plants are borrowing more money merely to service existing debts. They are thus one of the main reasons why China faces a potentially major bad debts crisis.

The wafer-thin margins these plants make are often only achieved through flouting the rules on limiting pollution. Central government action to shut these plants down thus solves two problems at once.

As with the environment, XI and his fellow pro-reformers are firmly committed to dealing with the bad debt crisis.

The accepted wisdom of many Western commentators is that truly successful innovation requires the creative destruction resulting from a free market, decentralised economy with a minimum of regulations.

But the Internet was a government-funded invention, as was synthetic rubber. This was invented with US government money during the Second World War to compensate for lack of access to natural rubber.

Two major exceptions don’t necessarily make a rule. But would Alibaba and Tencent have been able to thrive as successfully in China without strong central government control over foreign access to the e-commerce sector? Just look at the economic value they are adding through booming consumer spending via the mobile internet.

Equally, consider the example of electric vehicles. Last year, 507,000 EV vehicles were sold in China – 45% of the global total, thanks to big central government funding for R&D, subsidy schemes and car manufacturers being forced to buy credits if they want to manufacture cars that run on internal combustion engines.

You can argue, as the FT does very effectively, that government over-involvement in picking industrial winners can lead to overcapacity and so heavy losses. Right now, also, China’s consumers, who are growing ever-richer and so more demanding, find the current generation of local EV cars uncomfortable and too small.

But China is following the successful playbook of governments in Japan and South Korea. Since the 1960s, they have provided strong financial and regulatory support for industries that have been the basis for their economic success, including petrochemicals.

In China’s case, picking winners doesn’t just include EVS. Other targeted sectors include robotics, semiconductors and all the higher-value manufacturing and services essential for cleaning-up the environment.

And as one petrochemicals industry executive told me: In China, numerous new companies pour into each higher-value manufacturing or service sector because of ample government support. Many of these companies inevitably go bust.

What the government then does is support consolidation, leading to one or two dominant companies emerging. The good people from the other companies are then employed by the winners in these races.

Because innovators are aware that, at the very worst, they will end up with a job at the end of this process, if not a personal fortune, this encourages high levels of innovative risk-taking. It also prevents the drift of talent overseas.

Xi was of course a major force behind China’s 13th Five-Year-Plan (206-2020), at the core of which is a firm commitment to state-directed innovation.

The bottom line for China here is that it has to more innovative if it is going to escape its middle-income trap.

XI and his core political team once again recognise that China has to escape the middle-income trap.

They are also the architects of the One Belt One Road (OBOR) programme, the success of which they see as crucial to China’s overall economic reforms.

The best outcomes from the Congress

You can, as result, argue that these would be the best outcomes from the Congress:

You can counter this with Winston Churchill’s comment that “democracy is the worst form of government, except for all the others”. And you may strongly disagree with the points made above about more central control being crucial for China’s continued economic success. 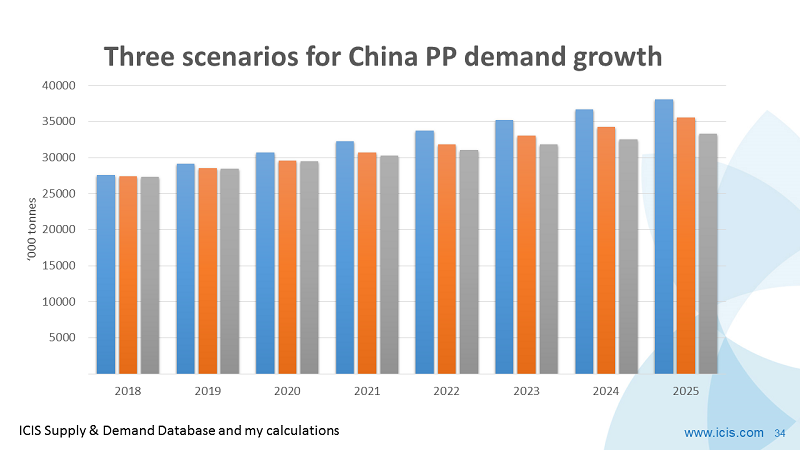 The above chart shows the following outcomes for China’s PP consumption growth in 2018-2025 under the three different Scenarios I detailed in the slide at the beginning of this blog post:

Petrochemicals companies, no matter what value chains they operate in, simply must have plans in place for any of these Scenarios happening.

We all obviously hope that Scenario One will happen. But if it doesn’t, and we are left with either Scenarios Two or Three, and we react like corporate rabbits caught in the corporate headlights, shareholders are likely to be very unforgiving.

PREVIOUS POST Threat To US Polyethylene From President Trump's Iran Decision
NEXT POST Next Polyethylene Downcycle: Risk That History Will Repeat Itself