Threat To US Polyethylene From President Trump’s Iran Decision 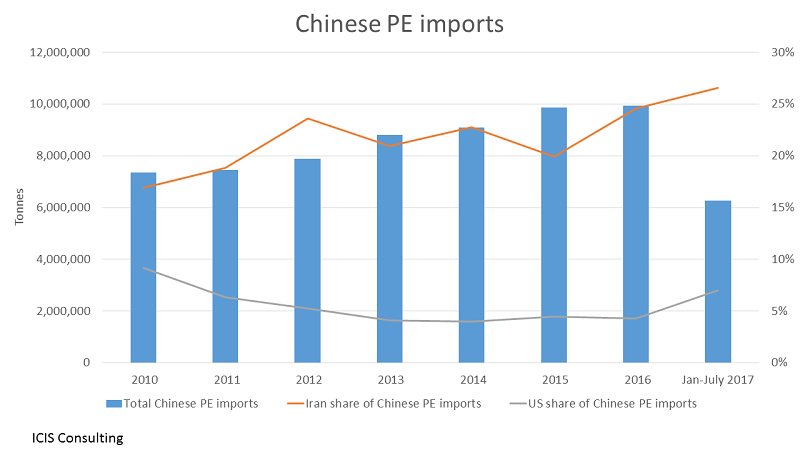 THE geopolitical and economic relationship between China and Iran was already very strong even before Donald Trump decertified the Iranian nuclear deal. Now, though, Iran and China could draw even closer. This could pose a major threat to the US polyethylene (PE) industry as it ramps-up capacity.

Here, first of all, is the essential context

China is very of short of oil and gas, whereas Iran is very much in the opposite situation. China’s domestic oil production is declining and it has very little local natural gas supply. Iran has 9.3% of global proven oil reserves and 18% of the world’s proven gas reserves, according to BP data for 2016.

Gas reserves in particular seem to represent a big mutually beneficial opportunity. As recently as 2015, Iran was forced to import almost as much gas as it exported because of lack of investment in its gas fields.  If China fails to wean itself off its dependence on coal to generate electricity, its environmental crisis will worsen. Pollution is probably the single-biggest threat to China’s long-term economic prosperity.

In some cities in Iran, youth unemployment is an eye-wateringly high 60%. The unemployment rate amongst women, a large percentage of whom are graduates, rose from 4% in 1996 to 20% in 2016. China is short of cheap labour because of its One Child Policy.

This is therefore how events could unfold in the polyester fibres value chain, thanks to both countries being members of China’s One Belt, One Road (OBOR) initiative:

President Trump’s decision to decertify the nuclear deal doesn’t meant it is dead. All the other countries that signed the deal with Iran – which includes Russia, China and the European Union – oppose the US decision. The White House has also merely asked US Congress to set up a number of “trigger points” that would result in re-imposition of sanctions. Congress has 60 days to reach a decision.

But from Iran’s perspective, it has no idea what the US is going to do next. Will it unilaterally make it harder for Iran to access the global financial system? Will the US also make it more difficult for Iran to import the equipment and technologies it needs to raise oil, gas and petrochemicals production?

Even if nothing happens over the next few months, Iran is likely to feel vulnerable as long as this current White House administration remains in office. It would be therefore no surprise at all if Iran were to attempt to strengthen its economic and geopolitical relationships with China.

As for China, it has its own set of concerns regarding US international policy. These relate to higher levels of protectionism, or even a global trade war, that could result from a recent flurry of US trade investigations. China needs more rather than less global free trade if it is going to achieve its ambitious economic reform agenda. We should expect China to double down in its One Belt, One Road programme – and in Iran it will find one very willing partner.

US capacity editions are mainly in LLDPE where its export availability is set to rise from around 200,000 tonnes this year to approximately 2m tonnes in 2020. And yet its percentage share of total Chinese LLDPE imports fell from 13% in 2010 to 7% in January-July this year.

The US has to gain rather than lose market share in future PE exports to China, as China is the only country with import demand sufficient to absorb the new surplus US production.

But if Iran and China do draw closer, China could end up importing more PE from Iran at the expense of the US. These imports might be via new Iran/China PE plants that are built in Iran – and more immediately, higher operating rates at existing Iranian plants.

We could also see a radical redrawing of petrochemicals trade flows in general as the OBOR becomes a largely self-sufficient region.