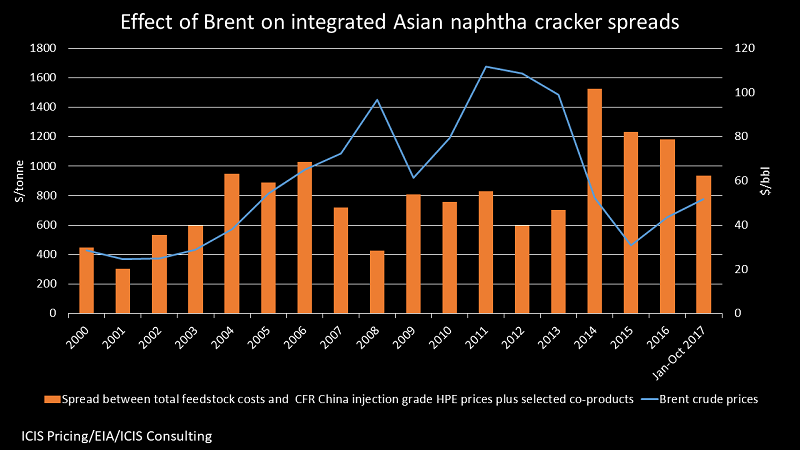 YESTERDAY I posted this slide on LinkedIn, in response to a lot of concern amongst the more than 150 or so delegates at the 5th ICIS Asian Polyolefins Conference in Bangkok about the impact of rising crude prices on profitability.

The chart shows spreads between naphtha costs, CFR China injection grade HDPE prices and the prices for selected co-products (see below for the full details about the methodology behind the slide). The orange bars represent the spreads with the blue line Brent crude prices. Oil prices obviously drive the cost of naphtha.

The slide shows the great value of ICIS pricing data and the data crunching done by our ICIS Consulting and Analytics teams.

Now let me explain in detail the significance of what this slide is telling is about the past, and the risks for the future.

Then came, of, course, the Global Financial Crisis, the collapse of crude and its subsequent rally in 2009-2013.  Spreads actually held up OK as they averaged $738/tonne during those years.

The last few years have seen record high spreads. Spreads averaged $1,219/tonne between 2014 and October of this year.

Spreads are of course not margins, but point towards margins, which ICIS also assesses. See the slide below for our assessment of historic Northeast Asian HDPE integrated variable cost margins. This includes all the co-products, minus feedstock and production costs. 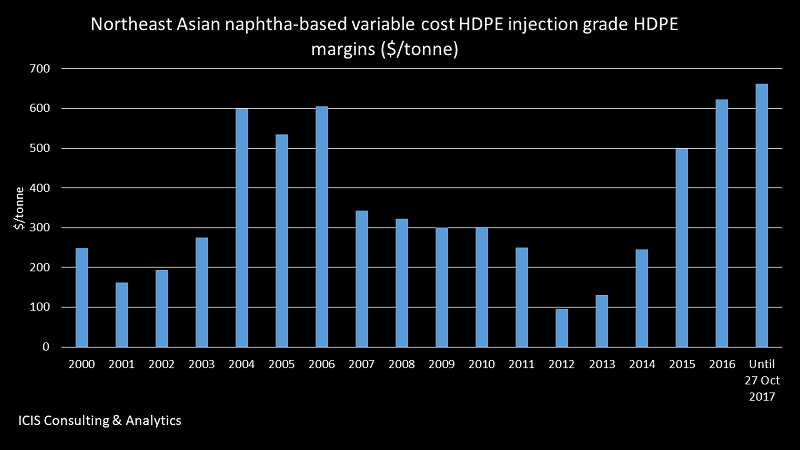 This helps to underline my point on Monday that much higher crude on increased geopolitical tensions is a major risk for Asian cracker earnings next year.

Let’s assume that the worst doesn’t happen. There isn’t a new war between Israel and Lebanon and there is no major clash between the Iraqi government and the Iraqi Kurds. This still doesn’t necessarily mean that the crude rally which began in July will not continue into 2018.

One reason is that Crown Prince Mohammed bin Salman must deliver to Saudi Arabia’s very youthful population now that he, and his branch of the royal family, have greatly increased their control over the government. The surest way of doing this is to push oil prices higher that would generate the funds to pay for more job creation and social programmes.

Secondly, higher oil prices would also raise the revenues from the Aramco IPO that is due to take place next year.

Background behind the slide

So it’s simple to multiply the prevailing naphtha prices in 2000-2017 by 3.3 tonnes. You can then compare the spreads between these total costs of naphtha to make a tonne of ethylene/HDPE with China CFR China HDPE prices.

But this isn’t how the industry operates, as more than 90% of Asian PE capacity is integrated through to naphtha and other liquid or gas feedstocks – i.e. the PE producers own and operate their own crackers.

So you need to add the co-product credits that you also make when you crack 3.3 tonnes of naphtha to make a tonne of ethylene. You also get, roughly speaking again, 0.52 tonnes of propylene, 0.33 tonnes of C4 olefins, 0.75 tonnes aromatics plus fuel-type products.

I have thus added multiples of the prevailing propylene prices, butadiene prices (ICIS pricing doesn’t track the pricing over C4 olefins) and an average of benzene, toluene and mixed xylene prices.

I didn’t add any values from fuel-oil type products, or any extra money a naphtha cracker operator might make from selling ethylene into the highly volatile, but often very lucrative, Asian spot ethylene market.