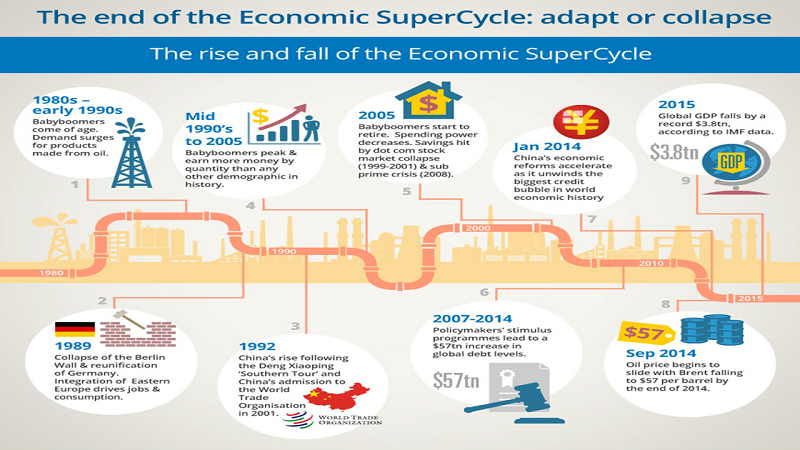 HISTORY has a tendency to move very slowly, inching forward incrementally, and then all of a sudden a flurry of events over an incredibly short space of time can change everything. This is where we are today.

Oil prices had been creeping up long before the 4 November launch of the anti-corruption campaign in Saudi Arabia.

From July onwards the market turned bullish. This was down to temporary factors such as record levels of buying by hedge funds and China building its strategic petroleum reserve.

These factors are temporary because hedge funds look as if they will soon run out of money to add to their long positions and the IEA thinks China will shortly run out of storage space for its reserves.

This made the post-July rally look very fragile when you added the important context of rapidly approaching Peak Oil Demand Growth.

Then the anti-corruption campaign began. The accelerating pace of events now also includes the chance of another war between Israel and Hezbollah. Israel says it doesn’t want a war, with the state of Hezbollah’s finances suggesting that it can ill afford a major conflict.

Middle East experts have offered assurances that a conflict is unlikely, but admit that there is a risk of miscalculation on either side.

From Comfortable Middle to Continuing Tension

Meanwhile, the resignation of Lebanon’s prime minister, Saad al-Hariri, has been followed by confusion over his whereabouts. Lebanon has claimed that he is being held against his will in Saudi Arabia, which Saudi Arabia has denied. Next came the order from Saudi Arabia to its citizens to leave Lebanon immediately.

The growing tensions between Saudi Arabia and Lebanon relate to Saudi claims that Hezbollah has been supporting the anti-Saudi Houthi rebels in Yemen.

Last week, I warned of crude reaching more than $70/bbl, but then peaking in April of next year on the underlying weak fundamentals. I said that prices might then very quickly retreat.

This is still a scenario, of course. But the odds have now increased of prices above my 2018 peak in April next year of $78/bbl for Brent. So has the chance of prices staying there for longer or going even higher.

Rising geopolitical tensions are in line with the third of our three ICIS/International eChem scenarios for oil prices. These scenarios were the basis of our February 2016 study, Demand: The New Direction for Profit.

In our first scenario – Collapsing Demand – we saw crude falling to $25/bbl on weak global demand that would make it impossible to repay much of the huge debts that had been built up since 2008. This is the result of economic stimulus polices that we maintain have largely been a waste of money.

We also raised a Comfortable Middle scenario of $50/bbl. This would be where stimulus policies would, in fact, have been worthwhile as the global economy recovered. This is where have been over the past 12 months, according to consensus opinion.

Our third scenario – Continuing Tension – saw crude returning to the region of $100/bbl on geopolitics leading to supply disruptions. This would stall economic recovery.

Events have, as I said, moved at a very rapid base and there may be more to come. Take as an example how the tensions between the Iraqi government and the Iraqi Kurds could build following the Kurdish vote for independence in September.

And the background to the Saudi-Hezbollah dispute is the Saudi-Iran relationship. Throw in the complications of the new US hard line on Iran, including President Trump’s recent refusal to recertify the Iran nuclear deal, then add the closer alliance between the US and Saudi Arabia, and the risks just seem to grow and grow.

We all know from history how serious oil shocks can be for the global economy. The 1973 and 1979 oil shocks serve as the most prominent examples of this.

But as we also highlighted in our study, what adds to today’s risks is that, unlike the 1970s, we no longer have the demographic dividend of an unprecedented number of young people entering the Western workforce. We instead have the demographic deficit of ageing populations in Europe and the US.

China, as a result this fantastic growth, represents the other big risk that wasn’t there during the 1970s, as we again discussed in our study. Its economic health has become pivotal to the future success of the global economy.

The problem with China is that even in a Comfortable Middle scenario for oil, its continued economic success cannot be guaranteed because of very difficult economic reforms. How might it now fare if oil becomes very expensive, given its heavy reliance on crude imports?

The 1970s oil shocks were bad enough for the global economy because they led to periods of stagnation. We could now face something equally bad, if not worse.