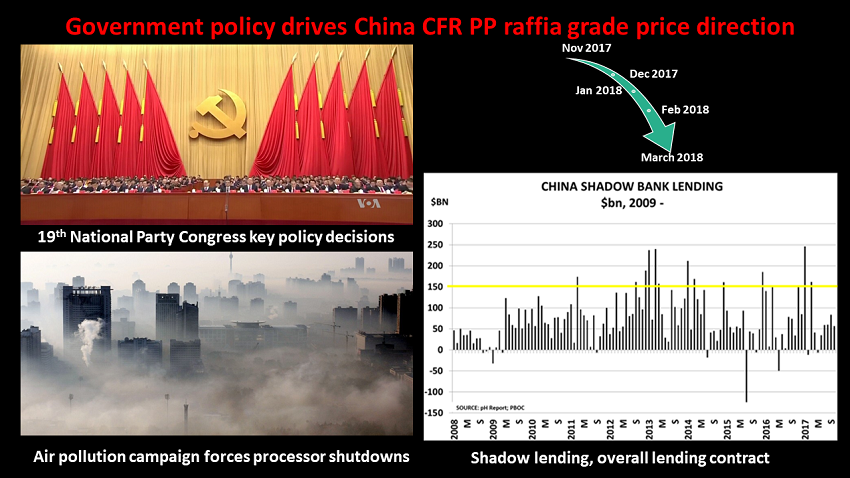 NAPHTHA feedstock costs are on the way up, which is of course the result of higher crude prices. So far this year, the naphtha cost for Asian steam cracker operators has averaged $479/tonne CFR China. But our forecast for November 2017-March 2018 is $541/tonne CFR China.

This might turn out be an overly conservative prediction, given the geopolitical risks that could drive oil prices much higher than we assume in our base case.

China’s polypropylene (PP) and polyethylene (PE) market players obviously understand the risks. You would have to have moved to Mars to have missed recent events in crude markets.

But I expect flat or slightly declining PE and PP prices over the rest of this year and into the early months of 2018. Click here for details of the Asian PE and PP Monthly Price Forecast Reports, where you can find my forecasts.

Granted, demand in China is always weaker at this time of year and there is new domestic PP supply that will come on-stream over the next few months.

Still, such are the risks of much higher crude that under normal circumstances I would have been forecasting higher polyolefins prices over the next few months. So, what’s going?

It is often wrongly assumed that understanding government policy in China is only for the long term strategic planners, the people who sit in the clouds pondering the future of China over the next ten years rather than the next few months or quarters.

But government policy has in reality often shaped the direction of petrochemicals and polymers pricing in China. Take the extraordinary rise in import demand in 2009, and thus the pricing for many products, which followed the launch of China’s huge economic stimulus programme.

Today serves as an example of another time when government policy is setting price direction. Here are the three reasons why, for the time being at least, I am predicting flat -to declining PE and PP prices over the next few months:

Chinese government policy is set to play an even bigger role in shaping markets over the remainder of this year and throughout 2018.

Now that Xi Jinping has, as I thought would happen, strengthened his political position following last month’s 19th National Party Congress meeting, he and his fellow reformers will likely push ahead with deleveraging.

Another reform objective is cleaning-up the environment. You should again expect more measures to deal with air, water and soil pollution in 2018 now that Xi has strengthened his position.

The $64,000 question is: To what degree would another credit slowdown reduce China’s chemicals consumption growth?

You must also look at this from a global perspective. A significant withdrawal of stimulus by China would negatively impact the global economy, as China is so important to global growth. This would in turn of course affect global petrochemicals consumption.

The impact of an intensified environmental campaign will vary from one petrochemicals chain to the next, depending on whether shutdowns are greater in volume upstream or downstream.

As I said, right now there is negative effect on polyolefins pricing because of the closure of downstream plastic converters. But it is the opposite case in acetic acid where the closure of methanol and carbon monoxide plants has reduced feedstock supply, forcing acetic acid producers to lower their operating rates.

Setting up a core team

Your answer to the $64,000 question is likely to be “not a lot, if it all”. The reason is that despite previous contractions in credit, China’s petrochemicals consumption growth continues to surprise on the upside. In polymers, this has been largely down to the extraordinary rise demand for packaging for mobile internet sales.

But, as I said, Xi and his supporters are now in a stronger position following the Congress meeting and can thus push ahead with reforms without any further delays caused by the “populists”.

Senior government officials also indicate that the scale of China’s financial imbalances might be greater than many people assume. Take this Bloomberg article as an example, based on the comments of central bank governor Zhou Xiaochuan.

Sure, Zhou is set to retire soon. But the Bloomberg article is a summary of a longer article that appeared in a book published ahead of the Congress meeting. The book was published to help party members understand the spirit of the Congress.

What I therefore recommend, if you haven’t done this already, is that you set up your own core team to assess and re-assess the implications of Chinese government policy.