Risks for US petrochemicals grow as crucial trade talks resume 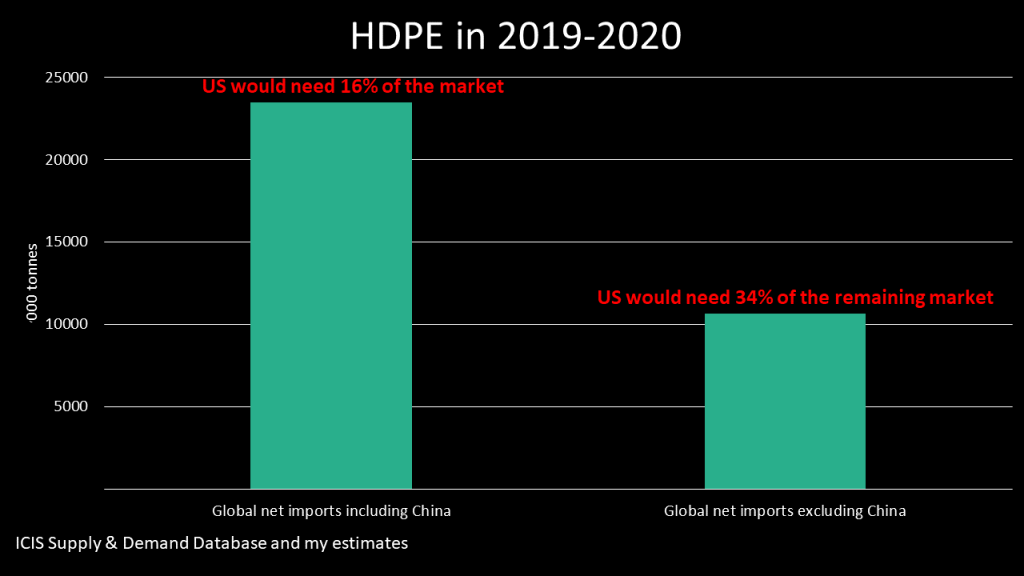 THE ABOVE chart further underlines what is at stake for the US petrochemicals industry as the US and China tomorrow resume high level trade talks in an attempt to end their trade war.

The chart shows that if the US can export HDPE to China in 2019 and 2020, it will require a 16% share of total global net imports. But if it cannot ship any HDPE to China this rises to 34%.

China imposed 25% import tariffs on US HDPE in late August last year. The latest available US trade data for September-October 2018 shows US shipments to China, probably as a result of US producers attempting but failing to pass on the new duties to Chinese buyers.

A problem for the US is the sharp rise in its HDPE production that’s scheduled to take place in 2019 and 2020. The ICIS Supply and Demand Database estimates that US HDPE production will rise by 775,000 tonnes during those two years as local demand increases by 290,000 tonnes.

What could jeopardise the talks is this morning’s news of US Justice Department indictments against China telecoms giant, Huawei. Accusations include theft of trade secrets and promising bonuses to employees who collect confidential information from competitors. Formal charge have also been levied against Huawei CFO Meng Wanzhou, who the US wish to extradite from Canada.

Let’s hope the US and China can reach some kind of trade deal by the 2 March deadline, or at the very least agree to not further escalate their trade war whilst giving themselves a few more months to complete discussions.

This would provide some breathing space for the US and global PE industries, even if, as I suspect, any trade deal would only be paper thin. I believe that a deal would inevitably fall apart because of the big economic and geopolitical gulf between the US and China. 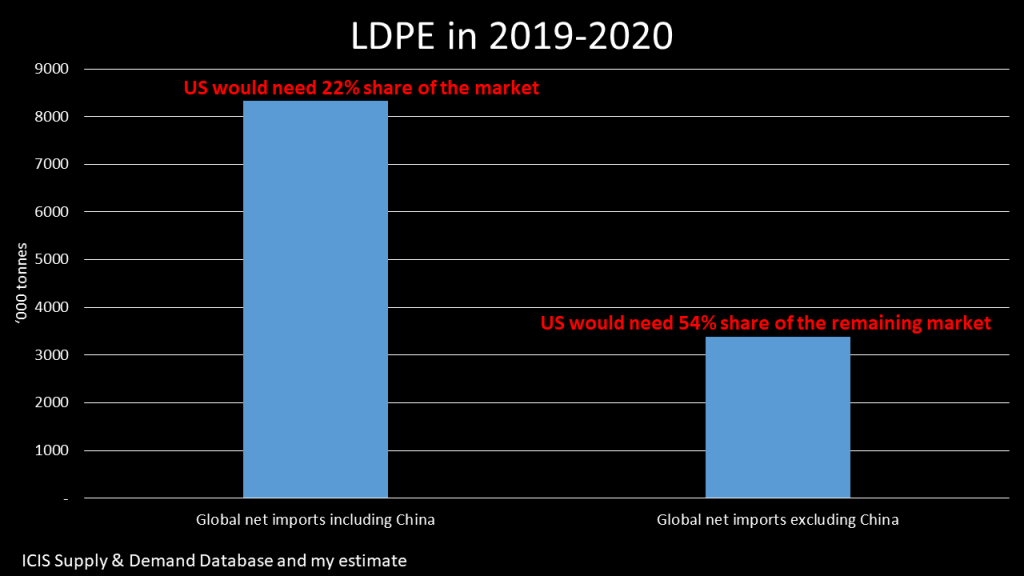 Now take a look at the above chart which shows what could happen if China decides to extend trade war duties to LDPE. If that were to lead to US inability to ship to China, the US would require no less than a 54% share of the remaining global net import as opposed to 22% if it can ship to China.

There are no indications that China will extend tariffs to LDPE. But in a scenario where the trade talks break down such an escalation cannot be ruled out.