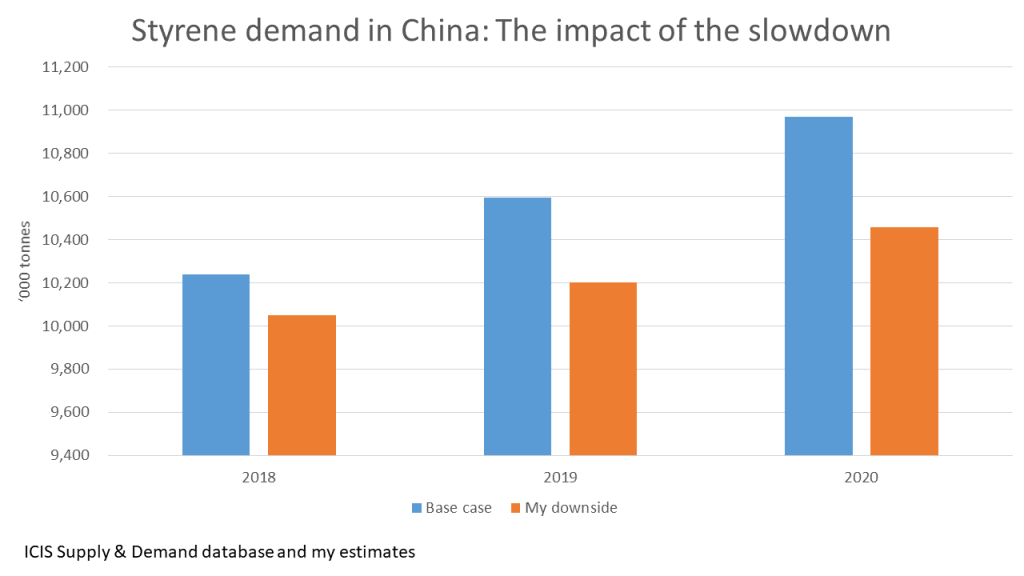 CHINA’S apparent demand (*see note below) for styrene in 2018 looks set to have increased by just 2.5% over the previous year. This would be the lowest percentage growth and the smallest addition of new demand in tonnes since 2012. This would compare with our earlier estimate of real demand growth of 4.1%.

Moving downstream to styrene derivatives, styrene butadiene rubber (SBR) apparent demand looks as if it might have declined by as much as 11% in 2018 on a year-on-year basis. We had expected positive real growth of 4.4%. An 11% decline would be the lowest growth since at least 2000 and would lead to a loss of 150,000 tonnes of consumption.

I estimate that acrylonitrile butadiene styrene (ABS) apparent consumption will have grown by 5% – the lowest growth rate in both percentage terms and when measured in new tonnes of demand since 2013. This compares with our earlier estimate of a 7.9% rise in real demand.

Bucking the trend is polystyrene (PS) where apparent demand seems likely to have grown by 11%. This would be the highest growth since at least 2000, and would be well ahead of our estimated real growth of 3.6%.

What partly explains weak growth in styrene, SBR and ABS is the slowdown in the growth of consumer spending. Retail sales grew by 9.1% during the first 11 months of last year compared with the same period in 2017, according to the government’s National Bureau of Statistics (NBS). This would compare with full-year 2017 growth of 10.2%.

But nobody should believe the NBS because, as usual at times like this, the government is very probably underestimating the extent of the slowdown. Retail sales in January-November 2018 grew by only 4.1% when the decline in GDP growth is taken into account, the South China Morning Post calculates.

The main cause of weaker retail sales growth was the big fall in credit availability via the shadow banking system. Last year’s monthly average shadow lending fell to pre-2009 levels, which was before China launched its huge post-Global Financial Crisis stimulus programme.

A secondary reason for weaker styrenics demand growth was the negative effect on the economy of the trade war. Some 180 of China’s jobs are dependent on exports.

Specifically on the styrene derivatives detailed above:

The job of an analyst is to only talk about the past when it is relevant to forecasting the future. Carry on reading if you need to know what is going to happen during the rest of this year and in 2020.

The economic slowdown will intensify

The law of diminishing returns means that China will be unable to stimulate the economy to the same extent as it did in 2009-2017.  The economic slowdown will therefore will intensify even if the US and China bring their trade war to an end (the likelihood of a 2 March end to the war has sadly diminished over the last few days).

One million tonnes of styrene demand at risk

Now take a look at the chart at the beginning of this blog post. It shows our base case for styrene demand growth in China versus my guesstimate of a downside. This downside takes into account 2018 apparent demand growth of 2.5% ending up as real growth. The expansion in real demand then falls to 1% in 2019 from our base case forecast of 3.5%. Growth in 2020 is at 2.5% over base case of 2.5%.

Cumulatively, from 2018 until 2020 this would mean 1m tonnes less new styrene demand in China compared with our base.

The Chinese economy isn’t going to collapse and growth will be still happen. But styrene, like all other chemicals, is way too dependent on China:

Every time Chinese chemicals demand catches even the mildest of colds, global demand always develops a bad case of flu.