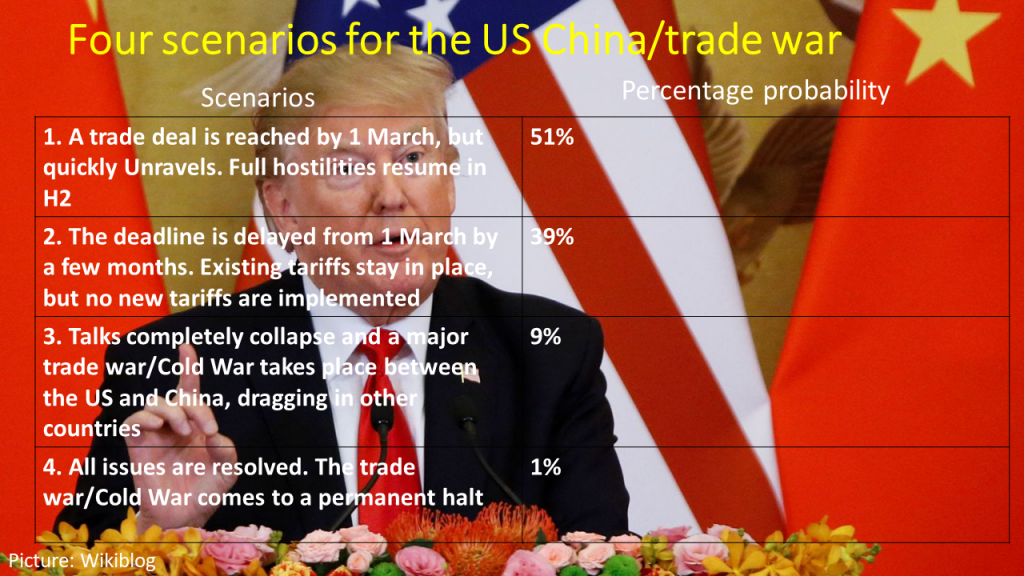 YOU CAN bet on a rally in equity markets and in oil prices if some kind of deal is announced by the US and China over their trade dispute by the 1 March deadline.

But we could be back to Square One if a deal is then picked apart by President Trump’s core supporters, and even by the Democrats who to a large extent support him on trade.

Events may end up mirroring what’s happened with the president and the Mexico border wall. A few weeks ago, it seemed as if a compromise deal would be accepted by the Democrats and Republicans on border security, but then right wing commentators such as Ann Coulter spoke out against the compromise.

She warned that the White House risked becoming ‘a joke presidency that scammed the American people” unless the president got his wall built. The president seems to have dug his heels in over the border wall since this type of criticism – hence, the partial government shutdown.

So here’s the thing:

The chances of China conceding to all of the US demands therefore seems to me to be close to zero. A halfway deal feels like the most likely outcome. This would involve China giving some ground as the US conceded that 100% achievement of its objectives was impossible.

Time running out for the March deadline

But, as I said, what if any such deal was picked apart and the president felt that his re-election chances were in jeopardy? He might feel the need to double down on the trade war/Cold War with China, especially if he failed to get his Mexico border wall – or was just perceived as having failed to get his wall in today’s world of constantly shifting semantics.

None of this is again meant as a criticism of Mr Trump. This is instead meant to give you some clarity about the risks ahead.

Perhaps no deal of any kind can be reached by the 1 March deadline, given that Washington is only just back from the Christmas holidays, the Chinese Lunar New Year is just around the corner – and again, as I said, the gulf between the two sides is so big.

This raises the second most likely scenario: The deadline for concluding the trade talks could be pushed back a few more months with existing tariffs remaining in place. But this would at least involve a continued pause on the implementation of new tariffs.

A third scenario is a complete collapse of talks and a major escalation of the trade war.

And of course there is a fourth scenario where a deal is done that’s acceptable to both sides, resulting in a permanent end to the trade war/Cold War.

The above table provides my percentage ratings for these four different scenarios. These are bound to shift around over the next few days, weeks and months.

You might want to argue over my percentages and may want to add scenarios of your own. This would be all good as this is a critical debate.

Why the debate is important is that everyone needs to accept that we are living in exceptionally uncertain times because of the rise of populist politics. The latest issue of The Economist uses the phrase “destructive ambiguity” when referring to the president. I see this as a useful phrase for politics in the West in general.

Just a few years ago, chemicals companies didn’t need to game plan different political outcomes because mainstream politicians were firmly in charge of all the Western governments. This guaranteed predictable policy approaches to trade and economics etc.

This is no longer the case. Populist politicians have filled the policy vacuum created by the failure of mainstream politicians to address lost economic opportunities resulting from ageing populations and the rise of automation.

A vital part of business planning has become detailed political risk analysis. This is essential for making decisions on everything from short-term sales targets to investments in multi-billion dollar chemicals projects.

PREVIOUS POST China slowdown: After Apple, next wake-up call will be from auto markets
NEXT POST Flood of US LLDPE begins to disrupt markets with worse to follow