The polyethylene world is now even more hooked on China 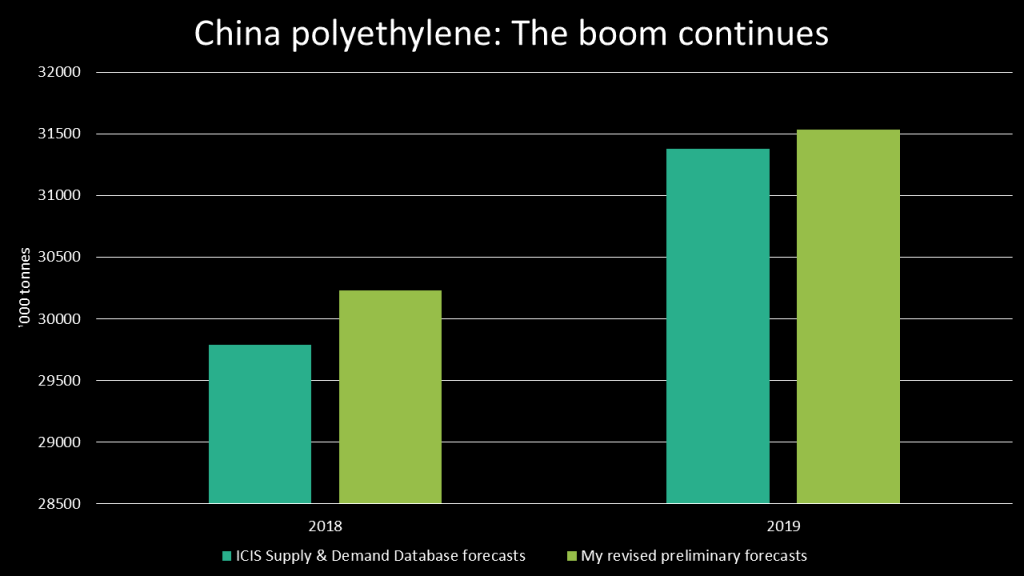 CHINA’S NET PE imports look likely to have risen by an average of 20% in 2018 over the previous year across the three major grades. Apparent demand (net imports plus local production) looks as if it will be 12% higher.

So much for excessive doom and gloom about the Chinese economy then? Not at all because if you dig behind the data, there were exceptional reasons why PE bucked the trend of a slowing economy. And whilst Chinese growth in 2019 could still exceed earlier expectations, it will surely moderate.

The collapse in imports of scrap or recycled PE was one reason for the strong 2018. This was the result of heavy restrictions on imports introduced by the Chinese government from January last year for environmental reasons. This led to a big surge in demand for virgin PE resins to replace scrap PE resins for low value end-use applications.

Another effect of the new scrap PE rules was the rise in demand for film-grade HDPE. Film grade HDPE was  increasingly used as fillers in cheap PE plastic water pipes, replacing the no longer available imported recycled PE. This resulted in a surge in CFR China film grade pricing premiums over CFR China LLDPE film grade to an historic high.

HDPE film film grade premiums  over LLDPE averaged $5/tonne between January 2010 and October 2017, with many extended periods when LLDPE was slightly more expensive. From November 2017 the HDPE premiums began to rise ahead of the recycling restrictions being introduced, with premiums further expanding once the new rules were in place. In November 2017–December 2018, premiums rose to an average of $145/tonne.

As film-grade premiums soared China’s producers maximised production at the expense of LLDPE in HDPE/LLDPE swing plants. This helps to explain why we estimate that LLDPE production will have fallen in 2018 over the previous year, with LLDPE net imports up by no less than 44%.

A further reason why LLDPE imports were so strong last year was because the new recycling regulations also applied to cardboard. Because scrap cardboard wasn’t available to China’s internet sales giants for protective packaging, they turned to expandable LLDPE.

Expandable packaging material can also be made from LDPE. China’s net LDPE imports are forecast to have risen by 24% in 2018 with local production also higher.

The other reason for booming LLDPE and LDPE demand appears to have been another stellar year for internet sales growth. Online retail sales totalled about $1.33 trillion in 2018, an increase of 23.9% compared with 2017, according to China’s National Bureau of Statistics. Even if this number is exaggerated, as is the case with many official numbers, internet sales will have still increased.

Most goods bought online are cheap “small ticket” items. So I expect only a minor negative effect from last year’s big credit squeeze. Buying two rather than one bottle of perfume for your girlfriend on Valentine’s Day was hardly a big financial commitment.

In contrast, though, sales of “big ticket” expensive items were badly affected by the credit squeeze. Auto sales fell by 6% in 2018. This was their first decline since 1992 and is one of the reasons why PP demand growth will have been disappointing.

HDPE pipe grade sales were also strong in China because of major investment in high pressure natural gas pipes. The government continued to convert homes and industry from coal to natural gas supply in order to reduce air pollution. This is a factor behind my estimate that net imports of all grades of HDPE increased by 6% in 2018. Relatively modest import growth was down to a big rise in local production.

And finally, there was overstocking. Excess PE was added to inventories during 2018. Some of this volume is probably still in the system and will act as a drag on pricing and imports during Q1.

The year ahead – moderating growth

If you adjust for these inventory distortions our preliminary estimate is that real PE demand will have risen by 7% in 2018 over 2017 – substantially lower than the 12% rise in apparent demand. But this would still mean 2018 consumption would be higher than our original forecast, as the chart at the beginning of this blog post indicates.

The new rules on recycled PE imports left scrap imports at just 13,000 tonnes in 2018 compared with 2.3m tonnes in 2017, I estimate. The benefit to virgin PE growth is as a result pretty much over.

China’s economy will continue to slow. The Chinese government will put its foot down hard on the economic stimulus acceleration pedal. But the law of diminishing returns points to the benefits being less than during the enormous 2009-2017 stimulus programmes.

The prospects of an end to the US/China trade have receded over the last few days. If the trade war continues this would be a further drag on growth.

So expect a moderation of PE demand grow this year, as the above also chart indicates. My guesstimate is that real demand growth will slip to 4%. But as you can see, this would still leave both 2018 and 2019 consumption higher than our earlier forecasts.

Even greater dependence on China

I suspect that when our ICIS Supply & Demand data team have finished all their number crunching, 2018 will have turned to have been quite a disappointing year for PE outside China. Growth will have been at best anaemic and in some markets such as Turkey it will have fallen.

The continued boom in China will have therefore increased the global PE industry’s dependence on China. This greater dependence is a major problem for US producers in particular, as they are expanding capacity during a period when the trade war threatens to block their exports to China.