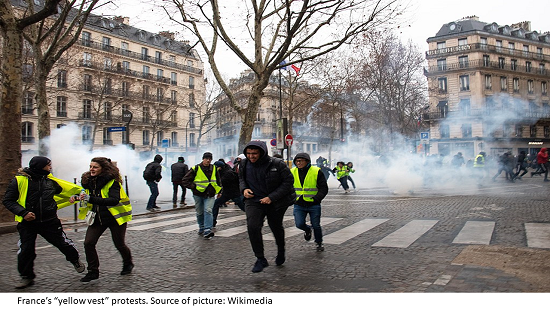 I PREDICTED in 2011 that the world would by a decade later be less globalised as a result of new trade barriers erected by populist politicians.

Nature abhors a vacuum and so vacuums in nature are quickly filled. The same applies to politics and society. I warned that the failure to address rising income inequality by mainstream politicians would result in populists offering the alternative solutions of trade barriers and passionate nationalism.

This has of course come true. Donald Trump is in the White House and one in four voters in recent European elections voted for populist, right wing politicians. The US/China trade and cold war is the most obvious example of the de-globalisation process.

Another of my 2011 predictions was that there would be more social unrest as a result of the growth in income inequality and anger at government debt-reduction programmes.

The recent yellow vest protests in France are just one example of how income inequality has led to social unrest.

Anyone interested in the roots of Brexit should read Jonathan Coe’s 2018 novel, Middle England. It identifies the post-Global Financial Crisis austerity programmes of British governments as one of the causes of the vote to leave the EU.

He adds, through his well-drawn characters, that the de-industrialisation of Britain and the resulting loss of economic opportunity was another factor behind Brexit. He portrays the vote as largely a protest vote by people living in the deprived parts of Britain against the country’s rich southeast.

It is all about demographics

My ten predictions for 2021 were contained in Chapter 4 of the ICIS/International e-Chem e-book, Boom, Gloom and the New Normal.

We argued then, and we still contend, that the major cause of today’s problems is the failure of mainstream politicians and central bankers to recognise the role that demographics are playing in reshaping underlying global demand:

Consumption is 60% of Western GDP. A growing army of pensioners creates obvious headwinds for growth. They lack the income to stimulate demand themselves, while the spending power of the younger generation is reduced by the need to help pay for their parents’ pensions.

Combine this demographics-driven loss of demand with all the job losses resulting from increased automation, and this explains why working –and middle-class incomes in the West have stagnated

Mainstream Western politicians and central bankers have failed to even acknowledge demographics as a problem. They have instead tried to stimulate demand that isn’t there by printing vast quantities of bank notes and keeping interest rates at very low levels.

The result of Western economic stimulus is asset bubbles that have largely benefited the rich at the top of the economic pyramid. The simple truth is that you cannot print babies.

China has also played a major role in stimulus. It panicked after the Global Financial Crisis because of the risk of major job losses. It has since then been responsible for around 50% of total global stimulus of $50 trillion.

The world is swimming in debt as a result excessive stimulus; Today’s global debt is $250 trillion, around three times higher than two decades ago.

With China cutting back on lending in a bid to deal with its debt problem, and with the Fed and the ECB also withdrawing stimulus, we could see a global recession in 2019.

The working and middle classes would likely bear most of the burden of new global austerity programmes designed to deal with this year’s recession, as was the case in in Britain immediately Global Financial Crisis (hence, a reason for the Brexit vote).

As resentment grows, we might see populist politicians winning control of and influence over more governments in 2019. Further protectionism is also possible.

Or we could kick the can down the road a little further if China relaxes lending again (I don’t think it can or will) and the Fed pauses on raising interest rates (a possibility).

But eventually we will have to deal with all of this debt in a world where demand is being reshaped by demographics.

If the US decides to bail these government services out it will either have to make cuts elsewhere, or raise taxes, or default on the debt itself.

Here is some optimism, though

I also made some optimistic predictions in 2011 for the now rapidly approaching world of 2021.

These predictions can be realised by chemicals and other companies taking major steps to refocus their business models. In short here, and this a theme I shall return to in later posts, chemicals engineering needs to triumph over financial engineering.

Meanwhile, though, there is no point in burying your head in the sand and pretending that the challenges I’ve detailed above will somehow, magically, go away.

PREVIOUS POST The blog is on holiday and will return on 2 January 2019
NEXT POST China slowdown: After Apple, next wake-up call will be from auto markets