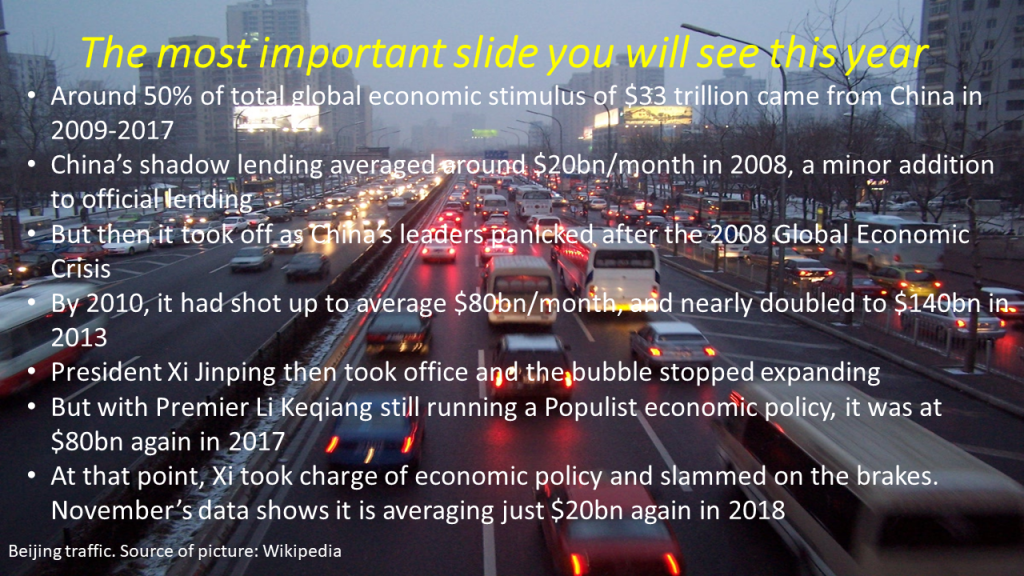 US stock markets yesterday demonstrated their worst negative reaction to a US Federal rate rise since 1994.   Asian equities also fell this morning in response to the Fed decision.

But you would be entirely wrong to conclude that all that needs to happen to return to the bull run is for the Fed to answer President Trump’s call and at least pause further rate rises, or perhaps even cut the cost of borrowing.

There is absolutely nothing the Fed can do to reverse events from hereon in, because, as I have been arguing since February of this year, the cutback in Chinese economic stimulus is the single-most important global economic event of 2018.

This is shaping lower economic growth outside the US and will be the biggest single driver of what I believe will be a global recession in 2019.

As the slide above details, China has hugely cut back on shadow lending – and it was China that delivered around 50% of total global economic stimulus between 2009 and 2017, mainly through the rise in shadow lending.

Don’t expect China to be able or willing to fully reverse course:

Then you need to consider that the exceptionally good cooperation between the world’s central banks that occurred during the Global Financial Crisis isn’t likely to happen again.

The European Central Bank is facing major pressure from Germany not to repeat bail outs of deficit-busting fellow EU members.

The EU is also preoccupied with the immediate strain of the Italian budget and a very good chance that in March next year, Britain will crash out of the EU with no Brexit deal.

This makes coordinated EU-wide action to stem a fall in financial markets unlikely.

Crucially, also, the animus in international relations makes a repeat of 2008 very unlikely.

Back to China: The worst has yet to come

Charlene Chu, a senior partner at Autonomous Research in Hong Kong, has led the way in accurately warning about  the Chinese credit bubble.

In this Bloomberg TV interview, which underlines what Paul Hodges and I have been highlighting all year, she estimates that real 2018 credit availability in China is down by 40% versus 2017.

She adds that the worst is yet to come for China because the negative credit figures have yet to show up in corporate earnings.

Chemicals companies must, as a result, prepare for a very difficult 2019.

PREVIOUS POST You must not assume a Goldilocks oil price in 2019 - not too hot, not cold
NEXT POST The blog is on holiday and will return on 2 January 2019