China slowdown: After Apple, next wake-up call will be from auto markets 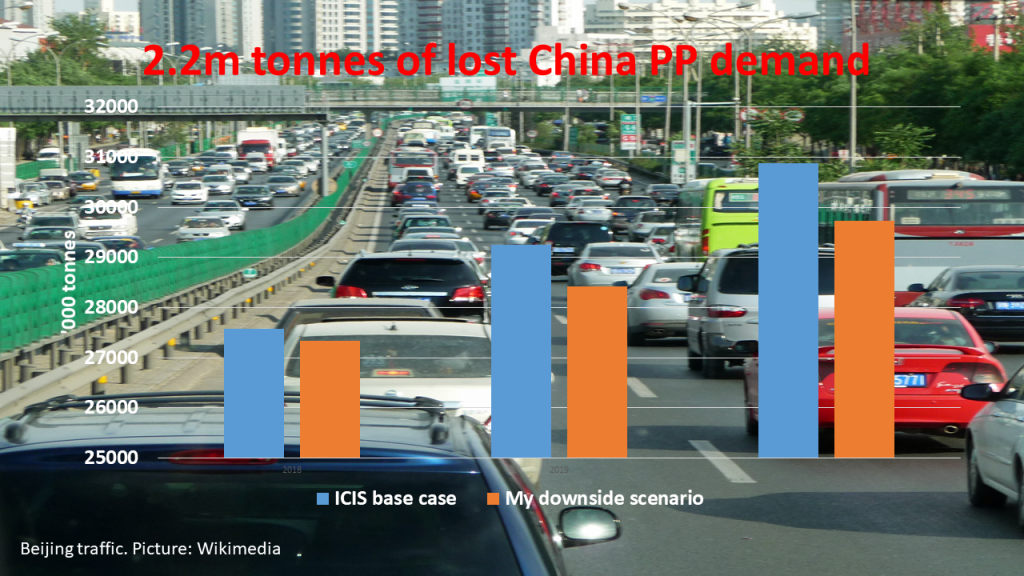 THE NEXT big wake-up fall for global financial markets and the chemicals industry is likely to ring loud from the autos market.

Expect global auto sales growth estimates for 2019 to be revised downwards with a steep sell-off in the share prices of the major car producers, as everyone realises that sales in the key China market will continue to disappoint.

The previous wake-up call was of course Apple’s first downward revision in its earnings forecast for 16 years, and the subsequent collapse in its share price, because of weaker-than-expected sales in China.

History is  sadly repeating itself. Remember 2014? It wasn’t until the end of that year that financial markets, consumer-goods markets and the chemicals industry realised that China’s economy was slowing down on a sharp reduction in the availability of lending. This was despite crystal clear evidence that the slowdown in lending had started in January 2014.

In 2018 another credit contraction began in January, but has again been almost entirely overlooked – even though, on this occasion, the reduction in lending has been far bigger than in 2014. Please note that:

Global autos growth: All about China

My fellow blogger Paul Hodges was well ahead of the curve, when, in early November last year, he highlighted the fall in I-Phone sales in China.

China might, of course, launch a major new stimulus programme, and that seems to be the assumption of most investors and chemicals companies. But I contend that China will not be able to come anywhere close to entirely replacing the steep fall in shadow lending.

We must therefore contemplate what this will mean for chemicals and polymers markets. A good place to start is with PP, as one of its major end-use markets is autos. PP is also heavily used to make other durable goods such as washing machines. Sales of washing machines in China are also reported to be on the decline.

Our excellent ICIS Supply & Demand base case forecast is that Chinese PP demand will have grown by 6.5% in 2018 over 2017. We then expect 6% growth in 2019 and 5.6% growth in 2020. China’s consumption during these three years would end up totalling around 88m tonnes.

Let’s instead assume that last year’s growth will have been only 5.5%, with percentage growth slipping to 4% in 2019 and 4.6% in 2020. This would make a major difference. Instead of consumption totalling 88m tonnes, it would slip to around 86m tonnes. When you look at the exact numbers this would mean 2.2m tonnes of lost demand.

The global implications would be very significant if this downside scenario is realised given the giant role that China plays in global PP markets. For example, our base case assumes that 37% of global PP consumption will emanate from China in 2018-2020, making it by far the biggest source of global growth. Europe would be in distant second place at 17%.

The most obvious implication of my downside scenario would be sharply lower global operating rates than under our base case, which sees capacity utilisation averaging 89% in 2018-2020.

It is not just about the trade war

Tim Cook, in announcing Apple’s first cut in its earnings forecast in 16 years, said the unexpectedly weak Chinese economy was about the trade war. It is not just about the trade war. A far bigger factor is, as I will keep saying until enough people listen, the slowdown in Chinese lending.

And to repeat again, I am struggling to see how this slowdown in lending can entirely reversed.

But, obviously, chemicals companies need to make their own mind up on this. They need deep analysis of China’s debt levels, the extent of its overinvestment in manufacturing and real estate, and multiple scenarios about what this means for future levels of credit availability in China.

In my opinion, this analysis will be far more important than scenarios about what the Fed might or not do over the next few months.