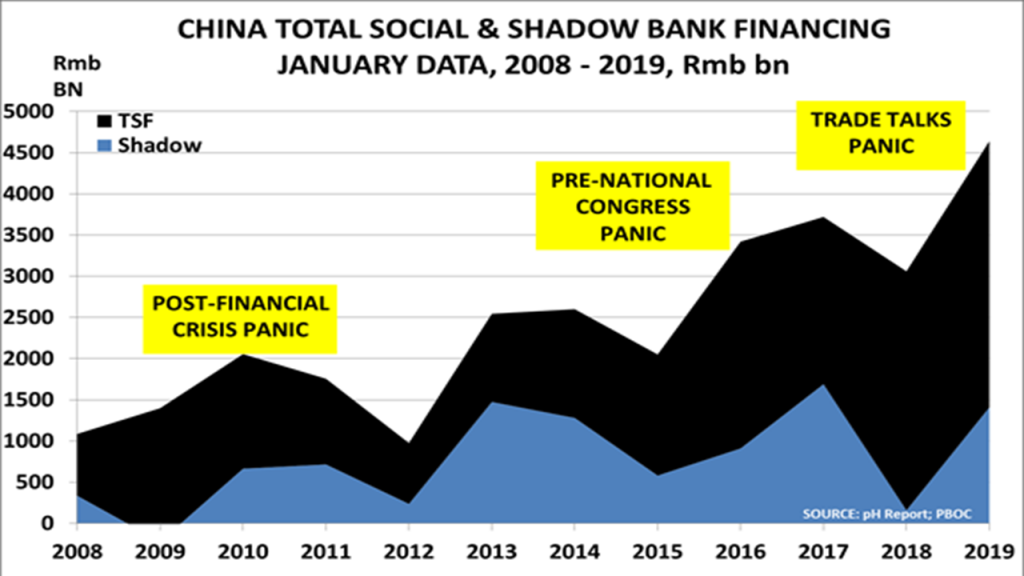 CHINA may have pressed the panic button again. If the extraordinary rise in January lending is sustained, this would represent the third time in recent history that China has opened the floodgates on new credit.

A sustained upswing in lending would obviously result in stronger chemicals pricing, margins and demand. Further upward momentum could be added by a US/China trade deal.

As recently last week, I didn’t have the long term context of what China did in January. But now, thanks to the above chart from fellow blogger Paul Hodges, there is a strong case to be made for three episodes of China panic:

More than a temporary blip?

What’s the case for January’s lending being more than just a temporary blip?

In January, Xi abruptly summoned hundreds of party officials to Beijing, according the New York Times. He then delivered a stark warning about economic instability in 2019 leading to political instability. He warned officials that they would be held responsible if the economy tanked.

This year is very politically important as it marks the centenary of the 4 May patriotic protests that led to Communist Party power. It will also be 30 years since Tiananmen Square, 10 years since unrest in Xinjiang and 60 years since a failed uprising against Chinese rule in Tibet.

And yesterday in an article headlined, Household Debt Ratio Not A Concern, the government-run China Daily wrote: “Policymakers should choose an appropriate macroeconomic policy to create a good business environment.

‘Deleveraging is important, but the authorities should also be aware of the new risks that it may create. That is why it is important to adopt structural deleveraging－in which case a moderately easy monetary policy could guarantee abundant liquidity.”

This is an important change in tone from earlier government commentary that only focused on the need for reduced liquidity in order to tackle bad debt problems.

China’s need for a strong economy in 2019 is also why I think it will be willing to reach a trade deal with the US. President Trump needs a strong US economy during his 2020 re-election – the other reason why I now see a deal as almost inevitable.

BUT the deal is bound to be paper thin as it simply cannot solve the deep and broad differences between the US and China. So it could easily come apart.

One of the perennial challenges is working out the difference between apparent and real demand growth in any chemicals market. Apparent demand is a simple measure of net imports and local production, whereas real demand adjusts this measure for inventory distortions.

In other words, real demand reflects any overbuilding or underbuilding of stocks by chemicals raw material suppliers, chemicals producers and chemicals buyers. The further up the chemicals value chains the harder it is to assess the extent of actual demand amongst the final end-users – the buyers of autos, housing, electronics and white goods etc.

If China has re-opened the credit floodgates there will be a big bounce in chemicals pricing, margins and apparent demand. Further upward momentum would be added by a trade deal.

In two key chemicals end-use markets in China, though, the upside in 2019 and 2020 could be limited:

You must as a result prepare for some overstocking in chemicals as optimism gets ahead of reality, and as buyers hedge against future price rises. This would affect the chemicals that go into housing and autos such as polyurethanes, epoxy resins, polyvinyl chloride, acrylonitrile butadiene styrene and polypropylene.

The law of diminishing returns might also temper the upside for all chemicals. Every dollar of new lending issued in China is producing  ever-lower positive benefits to GDP because of the increasing scale of corporate and consumer debts (despite what the China Daily says).

Set against this could be a renewed bull run in Chinese equities that mirrors 2014. The government might encourage a surge in stocks as an alternative form of wealth creation if a cap is kept on the housing market. Somewhere would also need to be found to place all the extra liquidity.

This would be a positive for consumer spending, especially via China’s booming internet sales channels – and for all the chemicals required to make finished goods.

BUT this would raise the danger of another stock market collapse on the scale of 2015.

A sustained upswing in new Chinese lending and the end to the trade war would deliver major global macroeconomic benefits – way beyond anything the Fed does or does not do. Remember that over the last ten years, China has surpassed the US and the EU combined to become the main driver of the global economy.

And a pick-up in Chinese chemicals demand would deliver significant gains to global chemicals markets because China is the world’s biggest consumer by volume and the biggest driver of global growth.

This might mean that instead of global propylene demand being 6.7m tonnes less than we have forecast in 2018-2020 and global PP consumption being 7m tonnes lower, demand could be greater than we expect. Over the coming weeks and months I shall re-crunch the data as it becomes clear whether the surge in China lending is being sustained.

But whilst another 1-2 years of stellar Chinse growth would push a lot more of us closer to retirement with good bonuses in our pockets, nothing will essentially change. China’s challenges, particularly its demographic challenge, aren’t going to go away. You cannot magically produce more babies from more debt.

The other big risk may remain trade and geopolitical tensions between the US and China. It could be that the US and China reach a lasting accommodation. I certainly hope so because nobody wants a repeat of the history of Britain and Germany.

In the late 19th century there was a similar build-up in tensions between Britain and Germany, and we all know how that ended.