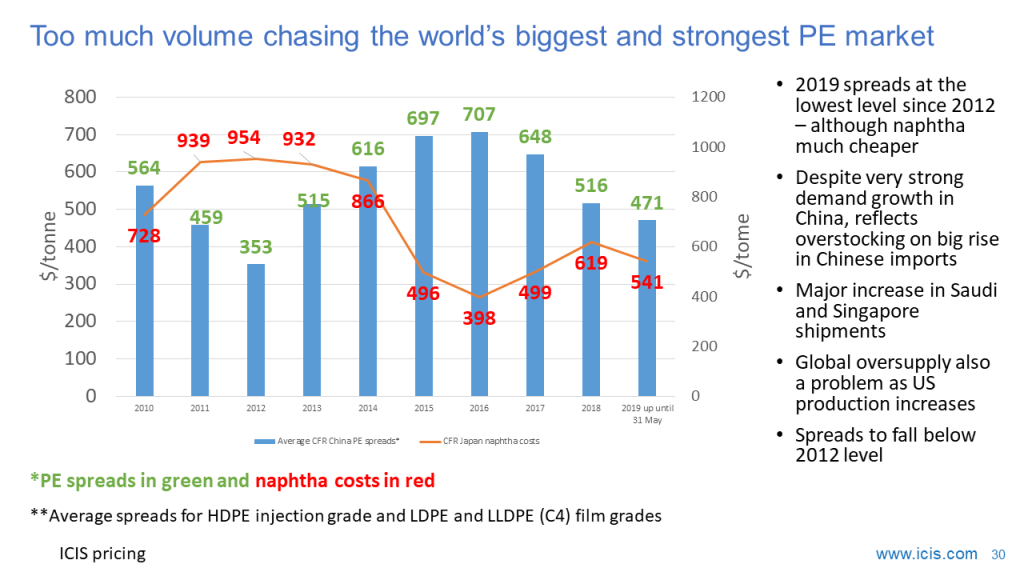 CHINA polyethylene (PE) spreads over naphtha feedstock costs are at a seven-year low and I believe that spreads will continue to decline to below their 2012 levels –a year which marked the last major industry profitability downturn (see the above chart).

You might want to argue that this has to do with higher oil and therefore naphtha prices. But in 2012, when PE spreads averaged $353/tonne, naphtha was at a sky-high $939/tonne CFR Japan. January-May 2019 spreads have this year been at $471/tonne as against naphtha at just $541/tonne CFR Japan.

Is demand the problem then? On the surface, no. Apparent demand in January-April 2019, on a year-on-year basis, was up by 13% (apparent demand is local production plus net imports). Net imports rose by a quite staggering 22% during the first four months of this year to 5.6m tonnes. Of the three major grades of PE, LLDPE saw the biggest increase at 37% to net imports of 1.9m tonnes.

But the problem is overstocking. This year is set to be another stellar year for Chinese PE consumption growth because of booming demand for single-use packaging of online sales, which is to some extent immune from a slowdown in the overall economy.

But I maintain that real PE demand growth will be in the region 8%, which of course means five percentage points of excess supply in January-April.  This equates to around 316,000 tonnes of excess PE in China inventories: 106,000 tonnes LLDPE, 160,000 tonnes HDPE and 50,000 tonnes LDPE.

Why the surge in imports? March-April arrivals jumped partly as a result of cargoes that were booked for China last November and December, when PE prices had fallen as a result of weak crude.

I suspect another reason for the sharp rise in imports is that markets elsewhere are weakening as the global economy faces increasing headwinds.

In the key market of Turkey, net PE imports were again down in January-April because of the country’s continuing economic problems. Elsewhere, the acceleration of the trade war is threatening global economic growth.

Weaker global PE demand is occurring as the US undergoes its biggest-ever capacity expansions. China might thus be one of the few markets in the world where demand growth exceeds expectations in 2019. In just about every country, the opposite could well be the case.

Chinese PE demand growth continues to astound on the upside because of the extraordinary boom in the sale of daily necessities and cheap luxury goods over the internet.

But there are too many eggs being placed into the proverbial Chinese basket – too much volume competing for this robust demand growth. Hence my argument that PE spreads during the rest of this year and into 2020 will fall below their 2012 level of $353/tonne.

PREVIOUS POST Vietnam PE demand booms on trade war, but for how much longer?
NEXT POST Symptoms worsen for Dr Benzene and China economy as trade war accelerates