Turkey PE demand could be 8% lower as economic problems continue 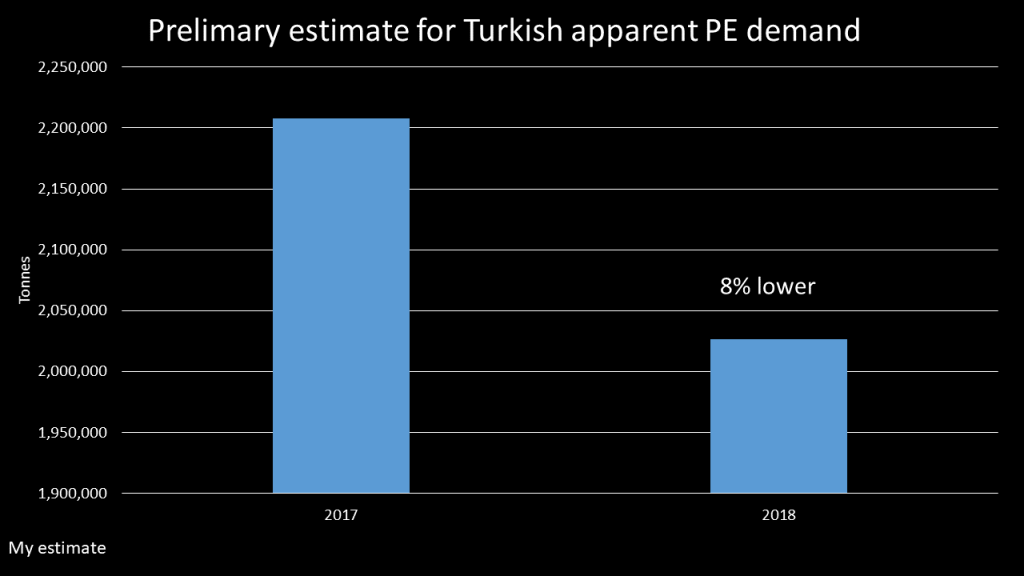 These are only preliminary demand numbers and the final numbers for 2018 may not be as bad as this.

But the positive demand growth that most people had expected for PE and PP in 2018 over last year seems very unlikely to have happened because of Turkey’s economic problems, which began last August.

These problems will very probably lead to lower-than-expected growth this year and in 2020, barring a major economic turnaround.

There as yet no signs of a big economic turnaround and conditions may have to get worse before they get better. As AFP writes in this article:

After a long period of solid growth, Turkey’s economy contracted 1.1% in the third quarter, and many economists expect it will enter into recession this year.

AFP adds that the lira was down by 28% against the US dollar last year, with financial markets unconvinced that the Turkish government has the right policies in place to tackle the country’s problems.

The ICIS team talks to many, many people on the ground in chemicals markets. This is demonstrated by my ICIS pricing colleague Ben Lake, when he writes in this article:

Turkey’s PE and PP players are bracing for a difficult year ahead after the market shrank in size in 2018, with most converters having reduced their outputs by 50-60%.

Climbing interest rates and the collapse in the lira’s exchange rate against other major currencies also meant that some of those who relied on bank credit found themselves bankrupt, having to shut their companies.

He adds that there are no obvious signs of a sudden economic recovery. Market players are instead expecting a gradual turnaround on a slowly rising value of the lira.

Turkey is a vital market for absorbing global polyolefins surpluses because of the size of its economy, strong growth and very little local polyolefins production.

We had expected Turkey’s net LLDPE imports to total 630,000 tonnes in 2019, making it the third biggest net importer in the world behind China and Europe.

This number is clearly now under threat at a time when US capacity is on the rise, the US/China trade war continues, and the global economy possibly heads into recession in 2019.

There are also substantial new volumes of US HDPE due on-stream with pressure from new supply lower in LDPE. In PP, global capacity additions in 2019  and 2020 will be far lower than in PE.

But if we do end up in a global recession in 2019 the whole of the polyolefins industry will obviously face major challenges.

PREVIOUS POST Flood of US LLDPE begins to disrupt markets with worse to follow
NEXT POST Oil prices to be buoyed by new shipping fuel rules, despite economic slowdown