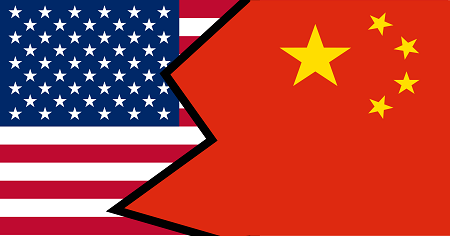 TODAY’S headline should be written on your petrochemicals company boardroom wall, in several inch-high capital letters, and should then be used as the basis for a deep discussion about the consequences of this outcome for your business. You should then build scenarios around how this would change investment strategies and trade flows.

None of what follows is again meant as a criticism of President Trump’s White House. But nobody can argue what he is attempting is radically different, and with great change always comes significant risks.

I have to admit, though, that I am unable to think of a series of events where the US ends up as winner from his approach. This doesn’t of course mean that I am right. I am here to be corrected by anybody who can come up with a detailed alternative argument.

And whether you agree or disagree with the scenario that follows is beside the point. The point is that we live in exceptionally uncertain times, which require petrochemicals companies to establish geopolitical research departments. Different geopolitical outcomes need to be at the very heart of your investment strategy.

China is racing against time to transform its economy. Escaping the middle-income trap isn’t a “nice to have”, but is absolutely essential if it is to avoid economic stagnation and the social and political unrest that would come with economic stagnation.

As for the US, it has long been deeply concerned about what it claims is widespread Chinese intellectual property rights theft. It is quite understandably worried about losing its edge in critically important industries such as microchips. Long-standing concerns exist over the loss of lower-value manufacturing jobs to China. The US is also struggling with the implications of manufacturing drift to the developing world in general, automation and the implications for middle class prosperity.

At the root of these concerns is anxiety over America’s long-term prosperity as its population ages. The demographic dividend provided by the Babyboomer generation is turning into a demographic deficit as the Babyboomers retire.  The laws of supply and demand mean that lack of sufficient births since the 1970s to replace the Babyboomers equates to a loss of demand, and thus economic growth potential.

Until January of last year, the US approach to dealing with China was multilateral as of course it is not only the US that is concerned about allegations of Chinese intellectual property right theft and China’s economic rise. All the developed nations share the same anxiety.

The old approach involved building an alliance of likeminded countries. This was through, for example, President Obama’s “Pivot to Asia” and the Trans-Pacific Partnership (TPP) trade deal that involves Asian countries other than China. Whatever its flaws, the TPP is meant as a hedge against China’s economic rise in general. It is specifically meant to be a counterweight against China’s Belt and Road Initiative (BRI) through creating an alternative Asia-centred investment and free trade zone.

When President Trump came into office, one of his first steps was to withdraw the US from the TPP. The next critical milestone was late last year when the US national security strategy was revised. For the first time, it sees economic competition from China as a threat to national security.

This laid the groundwork for the US announcement in April that it was considering imposing tariffs on Chinese imports and introducing new restrictions on Chinese acquisitions of US hi-tech companies. This has since then led to the risk of full-scale US-China trade war.

The risk of a trade war increased during the first week of May when a US trade delegation went to Beijing and demanded that China in effect dismantle its new economic growth model, which entirely relies on major government support for hi-tech industries.

China cannot accede to this demand because it would increase the chances of it failing to escape its middle income trap, which, as I said earlier, would mean economic stagnation. Meanwhile, the White House may not be prepared to compromise on this issue as there is strong business and Congressional support for its tough line on China. This is in contrast to earlier renegotiations over the NAFTA deal, when business leaders and Congress persuaded the White House to compromise.

US withdrawal from Iran deal adds to trade tensions

The reaction of European politicians and government officials to the US withdrawal from the Iran nuclear deal points to the extent of the rift between the US and the EU.

Take Jean-Claude Juncker, president of the European Commission, as an example. He said that the US “no longer wants to cooperate with other parts of the world. At this point, we have to replace the United States, which as an international actor has lost vigour, and because of it, long term influence.”

Nathalie Tocci, senior adviser to the EU, said: “There is something as fundamental at stake here at the transatlantic bond, because Europe can’t exist in a non-multilateral world.”

(The US, China, Russia, France, Germany, the UK and the EU were the Western co-signatories of the 2015 Iran nuclear deal).

Here is how events could unfold:

You will of course rightly point out that these days, thanks to Twitter and other social media, five minutes is a long time in politics, never mind the one week time period identified by British Prime Minister Harold Wilson during the 1960s.

But President Trump has held his “America First” views long before he took office. Whilst policy details may flitter backwards and forwards, the overall direction of travel seems likely to stay the same. This could leave the US at permanent odds with most of its trading partners.

A definition of multipolar is “polarised in several ways or directions”. As the US pursues its “America First Strategy”, China may pull in the opposite direction by becoming more multilateral.

It might seek to link the TPP, which is now going ahead with the US, with the BRI. And/or invite more countries to join the BRI, including developed countries other than the US that can supply it with the hi-tech industries it needs to escape its middle-income trap.

There is criticism aplenty of the way the BRI is being implemented, including how it could leave developing countries with unsustainable burdens of debt. There are also doubts about whether the BRI will ultimately be successful.

But it is possible to envisage a scenario where the US becomes increasingly isolated, geopolitically and economically, as other countries and regions move closer to China. China can offer as leverage favoured access to its vast domestic market.

The US under this scenario would be fine as it is by itself a vast, continent-sized economy. But it may lose its status as the dominant economic and geopolitical superpower to China.

China could also get to win if it escapes its middle-income trap. Escaping this trap may become easier if the developed economies outside the US feel compelled to align themselves more closely with China, thereby supplying China with the high-value technologies it needs.

China might then have a much stronger position, even a dominant position, in the industrial sectors in which the US is anxious to maintain its edge. These include microchips, automated machine tools, robotics, aeronautics, electric vehicles and autonomous-driven vehicles. In general terms, China may end up leading the world in many of the new economic opportunities arising from artificial intelligence.

As I said at the beginning, none of this is meant as a criticism of Donald Trump’s White House and it could be that his approach will work. I may have quite simply failed to understand the president’s rationale. Either that or compromises will be made by the White House that preserve the US role in the international order.

But what is undoubtedly the case for petrochemicals is that we are living in a time of exceptional geopolitical uncertainty. Geopolitics have come to matter more than the availability of low cost feedstock when deciding where to invest in existing assets and build new capacity.

How might geopolitics – and also rising sustainability pressures – reshape investment logic region by region? This shall be the subject of a series of posts, starting with Europe and polyolefins on Wednesday.