Home Blogs Asian Chemical Connections President Trump can only cause major economic damage by beating China, unless he has a time machine

President Trump can only cause major economic damage by beating China, unless he has a time machine

The views in this blog, are, as always, my own personal views and don’t reflect the views of ICIS. Thanks 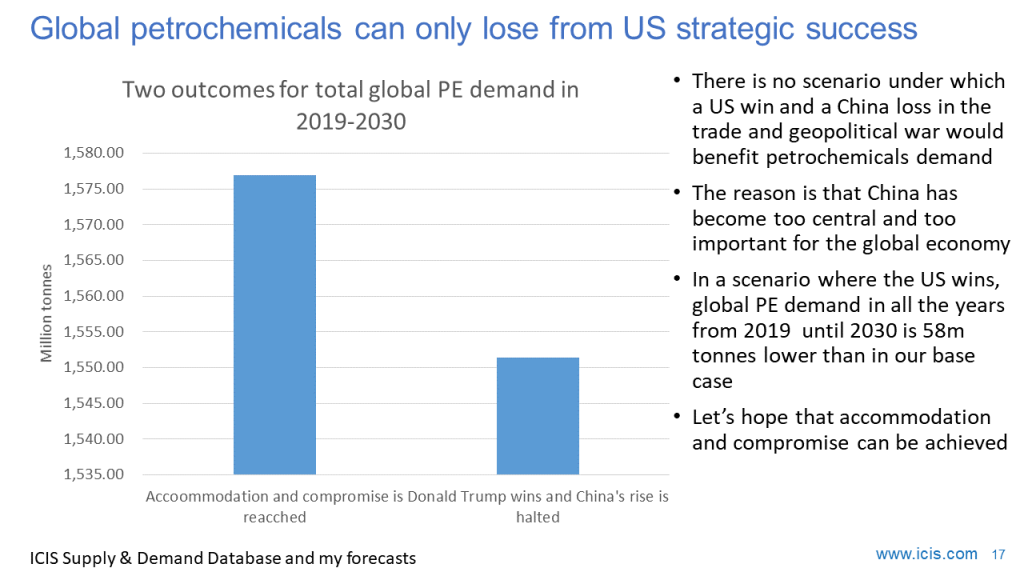 LORD SALISBURY, who served as British Prime Minister and Foreign Secretary in the late 19th and early 20th centuries, understood it was impossible to turn back time to the American Civil of 1861 to 1865. If Britain had taken the morally bankrupt and highly cynical decision to support the Confederacy, then perhaps the US would have ended up a permanently divided nation and its economic and geopolitical rise would have been stymied, mused Lord Salisbury.

But as this didn’t happened, Salisbury chose accommodation rather than conflict with the US when a dispute arose over the borders of Venezuela, with international arbitration settling the disagreement. Salisbury realised the US had become too strong economically and militarily for Britain to opt for conflict.

Salisbury is more broadly credited with preserving the British Empire well into the 20th century by accommodating the rise of Russia and Asia as well as the US. Disastrously, though, Britain and Germany were unable to defuse their disagreements. This of course led to the First World War, the aftermath of which laid the groundwork for World War II.

Maybe buried in some US military research institute is a time machine that Donald Trump can use to travel back to 1972 and the Nixon/Kissinger opening up to China, which led to the establishment of diplomatic relations. He might be able to persuade the two of them not to wave the olive branch. But would the US have then would the Cold War? If China had not been enticed by the West, it could have ended up in a very powerful alliance with the Soviet Union.

Another pivotal moment when history would need to be rewritten would be China’s accession to the World Trade Organisation in 2001. If Trump were to alight from his team machine and persuade the WTO not to admit China, its total dominance of global export markets would not have occurred.

China had greatly increased its exports before then, in the 1978 to 2001 period, thanks to Deng Xiaoping’s economic reforms and a youthful population, which enabled China to make lots of cheap stuff for export to the West. But it was the post-2001 period when export growth was turbocharged because WTO membership removed the tariffs and quotas that had restricted Chinese exports to the West. This allowed China to take maximum advantage of its favourable demographics and its heavy investment in world beating low value manufacturing. Nobody could now beat the China cost.

With supply has to come demand. What enabled China to also build its export prowess was the coming of age of the US Babybomers. The Babyboomers in the West in general were the biggest and richest demographic cohort in world history. Stretching my time machine point to its limit, Mr Trump, in order to prevent strong demand for Chinese goods, would have to go back to 1946 and hang around until 1964 – the end of the Babyboomer births bulge. During this period, he would need to be very busy in persuading Americans not to have as many kids.

Let’s assume that the US does somehow manage to beat China, to knock it off its perch and prevent its further rise as an economic and geopolitical Superpower.

Would the US regain all the manufacturing capacity that China lost? Not under the capitalist system because US labour costs are not low enough. If low value manufacturing were to return to the US in a big way, under the capitalist way of running the world the production would be run by robots rather than people because robots are cheaper than people.  Robots will also continue to get better at doing manufacturing than people. Robots don’t make mistakes, don’t get sick and don’t take coffee and lunch breaks. And when was the last time you saw a Robot on vacation, sunning itself on a sun lounger in Florida?

Logically, therefore, under the capitalist system, lots of low value manufacturing jobs would not come back to the US. Manufacturing would instead move back to the States to be operated by robots, and/or production would shift to developing markets other than China with lower labour costs than the US.

The only way the US can rejuvenate cheap washing machine, TV, raincoat and toy factories etc. is to abandon free markets and capitalism by placing a giant tariff wall around the whole of the US economy. This would prevent other developing economies from taking China’s place in cheap manufacturing.

The US would also need to switch to a “command economy”, where state subsidies would support employment-heavy manufactures that rejected using robots. This would surely not sit well with the US love of capitalism. And the irony would be that the US would be engaging in exactly the same type of state subsidies for manufacturing that it wants China to stop providing.

Trade barriers around the whole of the US economy would likely trigger a new Great Depression. US state support for manufacturing would increase tensions with China and make the descent into military conflict more likely.

Accommodation has to be the answer

Lord Salisbury was a wise man to accommodate the world’s rising powers. The US must also accommodate China if it is to reduce the risk of a war. What is done is done. Regardless of what you think about China’s political system, its record on human rights and it trade practices, confrontation cannot be the answer as history so clearly shows.

I have been unfair to single out President Trump so far in this post and so apologies. It is not just the president that is seeking to turn back time. Most of the political establishment, including many Democrats, are of the same view. The Washington consensus has shifted to regarding China a strategic adversary rather than a partner.

There are so many risks in the new US approach to China that all the scenarios for the future of the global economy and for geopolitics are bad, assuming the US continues on its current path. The only question is how bad will be the outcomes. A disastrous military conflict or just economic decline?

On just economic decline, what the US needs to recognise is the pivotal role China has come to play in the global economy. Since the global financial crisis, China has accounted for around one third of global growth, up from less than 20% before 2008.

Petrochemicals and polymers also hugely benefited from China’s huge post-global financial crisis stimulus package. China’s PE consumption was, for example, just 6m tonnes in 2000, 12% of the global total. By the end of this year we expect this to have reached 31% – 33m tonnes. By 2030, we are forecasting that China’s market will have reached 51m tonnes, 33% of the global total.

Now let’s imagine if the US were to cause China’s economy to stagnate by denying it access to global markets and to the technologies it needs to escape its middle income trap. I am presupposing here that there is no compromise deal and that the US and China remain at loggerheads.

Where would the growth in the global economy come from to replace lost growth in China? Where would the foreign direct investment in infrastructure in other developing markets come from, absent China’s ability to build lots of ports, bridges and roads and poor parts of Asia and Africa? I fear the answer would be “from nowhere”.

This very simple type of arithmetic has raised lots of eyebrows and raised frequent comments of, “You must have got this wrong, the numbers are just too big. Surely, you need to take three noughts off your numbers”. I haven’t. The data is the thing and all the data from every manufacturing sector tell you that there can be no healthy global economy without a healthy Chinese economy. There is no other possible conclusion because of the enormous, disproportionately big role that China has come to play in the global economy.