How the Millennials and “less is more” are destroying petrochemicals demand 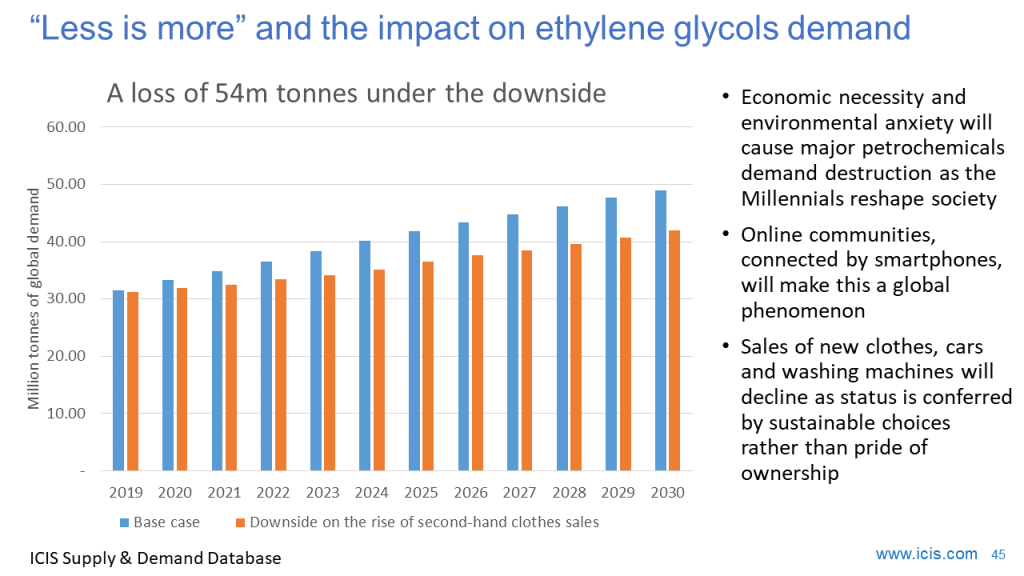 WE HAVE gone beyond the point of no return because of a major societal shift. Millennials, and a good number of a lot older people such as myself, have come to believe that “less is more”, that the environmental cost of throwaway consumption is intolerable.

Take this comment from this Wall Street Journal article about the growth of second-hand clothing markets in the US as a prime example. Quoting Jonathan Cheung, Levi Strauss & Co’s senior vice president for design innovation, the article says:

“There has been a change in the perception of vintage goods. When I was growing up, they signified that you couldn’t afford new clothes. Now, it’s a status symbol. It says you’ve made an intelligent and sustainable choice.”

It is not just concern over the environment that will lead to steep declines in sales of new clothes, autos and white goods etc. So too will the next global recession that I believe is very close. Ruchir Sharma, chief global strategist at Morgan Stanley Investment Management, highlights what I have also been arguing will cause the recession. He writes in New York Times:

“Since the financial crisis of 2008, the world economy has been struggling against four headwinds: De-globalisation of trade, depopulation as labour forces shrink, declining productivity and a debt burden as high now as it was right before the crisis.”

Sharma writes that 46 countries — including major powers like Japan, Russia and China — have shrinking populations because of the decline in birth rates. As Paul Hodges and I have been contending since 2011, demographics are the main driver of economic growth. We believe it is inevitable that GDP will expand at a much slower pace as populations grow older.

Making do with second-hand clothes and not owning a car will therefore not only be environmental desirable, but will also be economically essential.

Further, most of the rich will stay rich after the next crisis, as was the case after the Global Financial Crisis. The top one percent will hold onto their wealth as the rest of us lose our jobs and see the value of our homes etc. decline. This will dampen demand for new things for several years. This is not some kind of left-wing diatribe, it is just how things are in a global economy driven by algorithms and an over-powerful financial sector.

Online communities and the Millennials

Fast-moving consumer goods companies have long recognised that because of the impact of social media, the Millennial way of seeing the world doesn’t stop at borders. Their research shows that because Millennials are connected by Facebook etc. changes in spending patterns are global. This blows a hole in the argument that rising environmentalism is a rich world phenomenon.

The Babyboomers drove the era of “more and more” consumption, but they are now retiring and when you retire, the data show you already own most of the things you need and so spend less. The Millennials attach greater value to experiences rather than things, research by the consumer goods companies again shows.

Here are some statistics that illustrate the quite stunning rise in smartphone ownership in the developing world: In 2013, just 58m of the population of Indonesia – 24% – owned smartphones, but this year it has risen to an estimated 180m – 67%. The smartphone is the main medium for Millennials to communicate globally.

The ease of sourcing online information online about the harmful effects of pollution is increasing the momentum of social change.

Sticking with the clothing industry as an example, I typed into Google “environmental impact of clothing production”. This resulted in 40.4m search results in 0.73 seconds, including one article which claimed that textile production generates 1.2bn tonnes of greenhouse gases every year, 10% of the global total.

Complaining about non peer-reviewed research is the first instinct of many people in the petrochemicals industry because they have a scientific background. But there is no point in moaning about the world as it is.

As the 2016 US Presidential Election so clearly told us, once false information is out there it sticks. Online communities don’t stop believing in discredited information because most of us fear rejection and want to stay part of our communities. We are pack animals. Few of us also like to admit we are wrong. Doing so is far too rare a commodity.

There is a world of difference between the conspiracy theory nonsense of the 2016 election and the clear and present evidence that the petrochemicals industry is playing a major role in severely damaging our environment.

Lack of credible scientific evidence about the damage is also the result of lack of research, as during the “more and more” Babyboomer era too few people worried about the environment.

The impact on ethylene glycols

A very good example is the lack of research into the health effects of tiny fragments of plastics – microplastics – which are in the air we breathe. Only one study appears to have been published on this subject, which was in 1998. It found that plastic-inhaled fibres were present in cancerous lung specimens and concluded: “These bioresistant and biopersistent plastic fibres are candidate agents contributing to the risk of lung cancer.”

A study released last week points to the scale of airborne plastics pollution. Snow captures particles from the air as it falls and samples from ice floes between Greenland and Svalbard contained an average of 1,760 microplastic particles per litre, writes The Guardian in its report on the study. No less than 24,600 particles per litre were on average found in European locations. The work shows transport by winds is a key factor in microplastics contamination across the globe.

As pressure from the public builds you can guarantee a flood of new research into not just microplastics in the air but also into the health implications of other aspects of our throwaway society, including microplastics in the oceans and the seas. Each of us are eating at least 50,000 particles of microplastics every year because of the plastic in the guts of fish, in water and in beer. Surely this must be very bad for our health.

Here are two more points about the impact of this paradigm shift. They blow further holes in the fallacious argument that for every one lost sale of say a new pair of jeans in the developed world, there will be a gain of at least two in the developing world:

We must challenge business as usual assumptions on demand growth in all the petrochemicals and polymers markets because of the way that impact of economy, the retirement of the Babyboomers and the Millennials. We need “demand deflators” – reductions in base case growth forecasts which factor in the factors highlighted above.

The chart at the beginning of this blog post shows our base case forecast for ethylene glycols (mono, tri and d-ethylene glycols) demand growth between 2019 and 2030. The vast bulk of this market comprises mono-ethylene glycol, the end-use applications of which are apparel (clothing) and non-apparel (sheets, pillowcases and curtains etc.) plastic bottles and plastic films.

Our base case assumes average annual global ethylene glycols growth of 4% between 2019 and 2030. Lower this by one percentage point to around 3% on the growth of second-hand clothes sales – a fairly conservative reduction in my view – and we lose 54m tonnes of demand during this entire forecast period. The petrochemicals industry has to come to terms with lost demand on this scale.

PREVIOUS POST How we could all end up as losers from President Trump's trade policies
NEXT POST How sustainability will upend the petrochemicals cost curve, creating new winners and losers