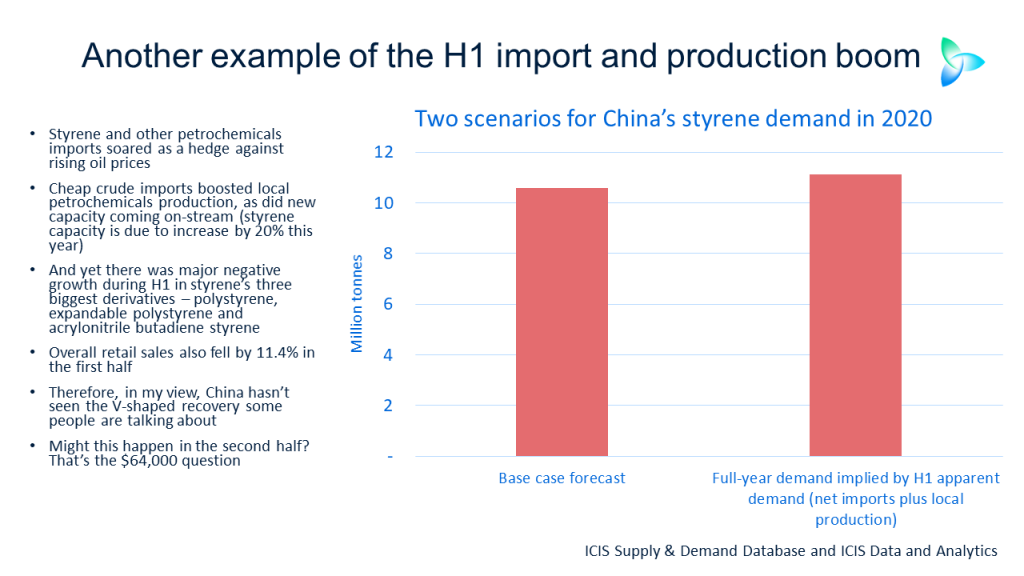 Note: All the data comparisons below are year-on-year

IF YOU closely study H1 data on China petrochemical imports and production, combine this with full-year demand-growth forecasts, talk to market participants and add in the macro data there is in my view only one conclusion: China has not seen a V-shaped economic recovery from the pandemic. Production is instead ahead of demand. This is despite lots of noise out there saying there has been a V-shaped recovery.

Let’s take styrene monomer (SM) and its derivatives as an example. In H1 2020, we estimate that China’s SM production rose by 3% to 3.8m tonne while net imports increased by 23% to 1.6m tonne (the growth was of course in Q2, as with all the numbers below, after China had brought the virus under control).

If you add these numbers together and annualise them to give a preliminary estimate of full-year demand, this implies consumption of 11.1m tonnes compared with last year’s 10.6m tonnes. This indicates demand growth of 5% compared with the base-case forecast in our ICIS Supply & Demand Database of minus 4%.

But demand for the three biggest derivatives of SM, which together account for 74% of China’s total consumption, appears to be very weak.

Net imports of acrylonitrile-butadiene-styrene (ABS) were down by 56% in H1 to 887,443 tonnes as local production increased by 4%. This indicated a 29% decline in H1 apparent demand when our full-year growth estimate is for zero growth.

China has long been in a net export position in expandable polystyrene (EPS). Net exports increased by 12% to 75,604 tonnes during the first half, which market sources say indicates weak local demand. We don’t provide month-on-month estimates of local production. For the full year we again expect  zero growth.

The smaller SM derivatives – alkyd resins, styrene acrylonitrile, styrene butadiene latices and styrene butadiene rubber etc. – mainly go into durable end-use applications. So, of course, their demand has been negatively affected because of the big falls in Chinese and global consumer spending on discretionary items.

Why did H1 SM consumption point towards full-year growth of 5% when key derivatives demand appeared to be so weak?

This, in my view, is partly due to the increase in oil prices since mid-April, which led to a typical round of petrochemicals stocking up . This didn’t just lead to a jump in SM imports: H1 polyethylene (PE) net imports were 7% higher as polypropylene (PP) net imports rose by 29%.

One of the main reasons why global crude prices rallied was the big surge in Chinese imports during H1.

Privately owned refineries were given government permission to “frontload” their import quotas for 2020. The private refineries almost filled their entire quotas for 2020 during the first half so they could take advantage of cheap oil. The state-owned majors also went on a buying spree as H1 crude imports jumped by 9.9.% despite weak local fuels demand.

Cheap crude helps explain high domestic refining production in the second quarter, after the pandemic had been brought under control. Until the recent floods, refinery operating rates were very high.

This is likely to have then led to competitively priced feedstock supplied to petrochemicals plants; hence a reason why PE production grew by 7% and PP production by 10% (this was along with the 4% rise in SM output already mentioned above). Paraxylene (PX) output was no less than 70% higher (this is no typo, 70%!)

The other obvious reason why refining and petrochemicals output jumped are the large increases in local capacity. In SM, capacity this year is scheduled to increase by 20%.

Official data showed that this worked through to what China’s National Bureau of Statistics (NBS) said was a 4.4% rise in Q2 in “industrial value-added” as factories stepped up output following the virus being brought under control. Output from primary industries during Q2, which includes refining, was up by 0.9%.

But the South China Morning Post wrote that China’s retail sales, which cover both consumer spending and government purchases, fell by 11.4% in H1 to yuan (CNY) 17.2trn ($2.4trn), again according to the NBS.

Per capita consumer spending fell by 5.9% to CNY9,718 Yuan ($1,392) in the first half, meaning total consumer spending in China was just $13.6trn over the period if multiplied by 1.4bn people. This was less than 30% of GDP, the newspaper estimated.

“Ordinary Chinese people are unable to consume more because they are burdened by mortgage payments as well as an uncertain job and income outlook,” said Fu Peng, chief economist at brokerage Northeast Securities, in an investment note quoted by the South China Morning Post.

I have good company in my opinion that production has got ahead of demand.

“The coming months will show whether consumer demand [in China] will rise with production levels. Going forward it is crucial that global demand returns to a reliable solid level,” said Martin Brudermuller, CEO of BASF, in the company’s Q2 results last week.

He was relatively confident that China’s demand would catch up with supply. I am not so sure.

The floods and the 2020 peak manufacturing season

As if China didn’t have enough to deal with, there are this year’s floods which remain largely under-reported. If you conduct a news search you will find very few articles on the subject relative to their potential impact on the economy.

“Direct economic losses from the flooding from 1 June to 22 July stood at around $17bn, with some 45.5m people affected and more than 2m people evacuated,” ICIS wrote in an article late last month.

As the floods continue, concerns remain over the Three Gorges Dam, downstream of which are the cities of Nanjing with a population of 8.5m and Wuhan with 11m. Several smaller cities with populations of 4.5m-6m are also downstream of the huge dam.

In response to the build-up of floodwaters upstream from the Three Gorges, the authorities have been releasing large amounts of water from the dam. The swell of water caused by upstream flooding reached 55,000 cubic metres (cbm) per second late last week, exceeding the official warning level of 50,000cbm, according to this article in The Maritime Executive.

Let’s hope that the dam remains secure. But, at the very least, it seems likely that our earlier estimate of $17bn of economic damage has been exceeded.

We also need to consider this year’s peak manufacturing season between August and September, when China normally ramps up production of finished goods for delivery to the West in time for Christmas. The economic damage caused by the virus seems to guarantee a very weak 2020 season.

China may launch a lot more economic stimulus during H2 as retail sales are also boosted by continued strength in the local stock market. But how much more stimulus can China afford given the scale of the country’s bad debts? And will the stimulus work in turning around demand in an environment of unprecedented economic uncertainty?

Whatever the outcome, back to my main point: I believe it is misleading to talk about a V-shaped recovery as if it has already happened. This isn’t supported by a close look at the data.

This, therefore, raises the risk, as I’ve highlighted before, of a H2 destocking process in petrochemicals. Who would suffer the most? Not the local producers for reasons I’ve outlined previously. You should instead prepare for a potential sharp decline in imports.

PREVIOUS POST China moves closer to Iran as tensions with the US build: Implications for petrochemicals
NEXT POST China's shift towards styrene self-sufficiency adds to pressure for new petrochemicals business model