Home Blogs Asian Chemical Connections China moves closer to Iran as tensions with the US build: Implications for petrochemicals

China moves closer to Iran as tensions with the US build: Implications for petrochemicals 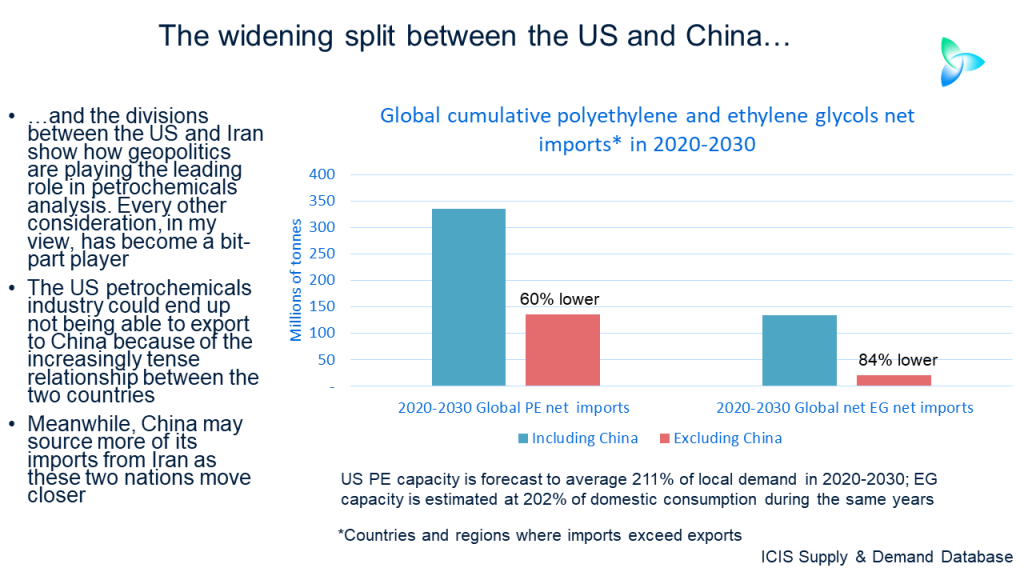 Opinions and emotions and can shape how we interpret data, but, as we all know, our personal views need to be put on hold and our emotions held in check when the numbers are being crunched.

This is of course easier said than done on highly emotive subjects such as the widening divisions between the US and China, and between the US and Iran, and the implications for the global petrochemicals business. What follows, however, is an attempt to stick to the data only and what the data is telling all us, regardless of our political views.

Our ICIS Supply & Demand Database shows that if all unconfirmed Iranian PE projects were to go to ahead because of new Chinese investments, the country could export a cumulative 75m tonnes of PE between 2020 and 2030. This compares with our base case of 42m tonnes, which assumes that none of the unconfirmed projects go ahead. Iranian exports during this period might thus be 79% higher than our base case.

The $280bn worth of Chinese investments have been on the cards for a while. What appears to have made them more likely is a proposed new economic and security deal between Iran and China.

Here, from this excellent Oilprice.com report, are some data onn the Iranian economy: As of a week ago, Iran’s GDP growth was minus 22%, unemployment was around 37%, inflation was over 65% and it had a negative trade balance of $6.5bn compared with November 2019.

The weakness of the Iranian economy is the result of the US re-imposition of sanctions in 2018, following its unilateral withdrawal from the Joint Comprehensive Plan of Action (the nuclear deal) in May of that year.

The numbers on the Iranian economy support the view, expressed by Oilprice.com, that Iran has little choice but to accept Chinese investment in order to unlock its huge hydrocarbon reserves. Iran’s South Pars gas field is the biggest gas field in the world.

Now let’s look at some important data on China. The numbers show China faces problems which are separate from and pre-date its increasingly tense relationship with the US.

China is in danger of becoming old before it is rich. Despite tremendous economic growth over the last 30 years, it remains relatively poor compared with the West. China’s average per capita income was just $8,827 in 2017 versus $59,532 in the US, according to the World Bank. The IMF has warned that China’s pension and healthcare liabilities could rise to 100% of its GDP.

Between 2015 and 2040, China’s population aged 50 and over will increase by roughly 250m as the population under 50 falls by the same amount. During the same years, the 15-29 age group – which across many modern societies has the highest education and is the most IT and tech savvy – will shrink by 75m.

Youth unemployment in Iran averaged 26% between 2011 and 2019. The country has a median age of 32 versus China’s 38. This helps explain why Iran is part of China’s Belt and Road Initiative (BRI).

Here is an example of how the BRI could work as China takes advantage of a hydrocarbon-rich youthful overseas country such as Iran. Note that China imports 75% of the oil it requires as it has only 1.5% of the world’s proven oil reserves:

Implications for the US petrochemicals industry

Pricing of hydrocarbons from Iran could be very advantaged, again according to Oilprice.com. It estimates that China will be able to obtain a total discount of around 32% off purchases of oil, gas and petrochemicals from Iran.

The analysts who look at global petrochemicals cost curves might decide to consider what such a discount would mean for the US oil, gas and petrochemicals industries. They could calculate how this would affect the US ability to export to China, the world’s biggest import market by far.

But cost curve analysis factoring in Chinese discounts of 32% for Iranian imports may prove academic as there is a very real risk that the US will be entirely shut out of the Chinese market. China’s worsening relationship with the US has led China to accelerate its  BRI programme, an objective of which is to create a trading zone self-sufficient in oil, gas, petrochemicals, other raw materials and manufactured goods.

Back to the data and the charts at the beginning of this blog post. They show, again using our ICIS Supply & Demand Database, cumulative global net imports in 2020-2030 for PE and ethylene glycols (EG), including and excluding China.  This measures only the imports among the countries and regions in the world that import more than they export. But this obviously covers the major importers, the ones that heavily shape investment decisions.

Global PE net imports in 2020-2030 are estimated at 336m tonnes if you include China. Without China, they fall to just 136m tonnes – 60% lower. EG net imports including China are forecast to reach 134m tonnes versus 21m tonnes without China. That’s a difference of 84%.

Meanwhile, in 2020-2030 again, we forecast that US PE capacity will average 211% of local demand with EG capacity estimated at 202% of domestic consumption. This is the result of the biggest-ever wave of capacity expansions in the history of US petrochemicals.

Here is an opinion that you may think breaks the objectivity rule I set at the beginning of this post: Geopolitics are playing the leading role in determining petrochemicals trade flows, the profitability of steel already in the ground and where new capacity will be built. All other considerations have become bit-part players. Show me the data that disprove this view and I will listen.

PREVIOUS POST China polyolefins market H1 review: so far so good, but beware of the risks ahead
NEXT POST Why a hard look at the data show China has not seen a V-shaped recovery