Life After The “Sugar High”: Oil Prices And Petrochemicals

WHY is it that even though demand in the US for petrochemicals is still well below the 2007 peak, as indicated by the latest American Chemistry Council capacity utilisation chart, the November ICIS Petrochemical (IPEX) for the US shows pricing at such elevated levels? (see the charts below). 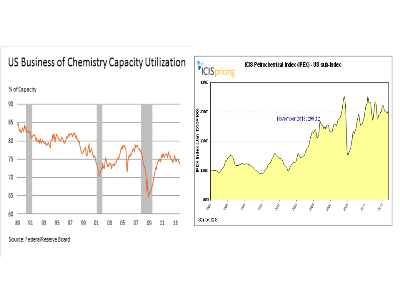 “Never mind,” one might think, “margins in the  US are fantastic because of the ethane advantage (see the chart below). This places the industry in a tremendously strong position once the US  economic recovery is firmer – and all the signs are that we are close to a sustained economic recovery.” 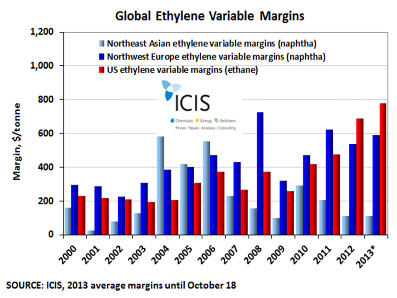 But what if one of the biggest reasons why petrochemicals pricing has been so  high relative to demand is because of the “sugar high” delivered to oil markets by the Fed’s quantitative easing programmes since the economic crisis in 2008? What happens to oil prices when and if the Fed tapers? Tapering could happen by as early as next month.

And what happens to other commodity markets, equity and property markets, that have also been boosted by easy Fed lending? If these markets also retreat on the event of tapering, what would this mean for the broader US economy?

More immediately – possibly, in fact, by as early as this Tuesday or Wednesday – we should at least know the broad outline of the policy decisions taken by China’s leaders during the crucial November plenum. The plenum runs from 9-12 November but the results are expected to be kept secret until the event is over.

A sharp retreat in oil prices, therefore, feels like a scenario that chemicals companies should build into their 2014 planning.

What happens if oil goes below the $80 a barrel minimum that US energy companies say they need to justify tight oil production?

Plus, of course, substantially lower oil prices would erode the ethane advantage over naphtha for making petrochemicals. There are other reasons why naphtha cracking might make a comeback.

And to return to where we began, we also need to ask the question as to why, despite years of life support from US and Chinese central bankers, global chemicals operating rates have also yet to return to their pre-crisis level (see the slide below, which is again from the ACC). 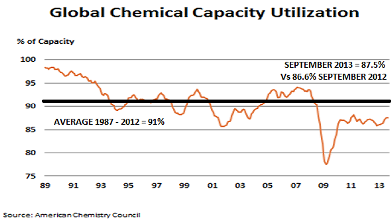 We think we know some of the reasons why.

If we are  only half right, there is a significant risk that it could be many more years before global chemicals demand recovers to 2007 levels.

This further questions the logic behind raising US ethylene capacity by as much as 64%.