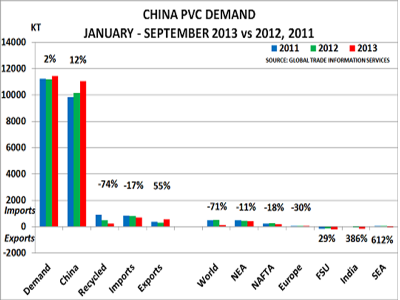 AS we head into this weekend’s crucial November plenum , it is worth remembering that there is no chemicals and polymers market to compare with China’s in volume terms anywhere else in Asia.

Take polyproplyene (PP) as just one example. Industry estimates are that China’s consumption totalled around 16m tonnes in 2012. Its nearest rival was India at approximately 3m tonnes.

Thus we think it is a fallacy to argue that if Chinese growth does disappoint, other countries such as India and Indonesia can step in to fully compensate for the disappointment.

Most obviously this is due to the fact that while in percentage terms, markets such as India might look as though they are roaring ahead, in volume terms they are a decade or more behind China. “Will India ever catch up?” is, we think, a valid question that should be posed by every chemicals company corporate planner. It is not even worth asking the question whether other countries such as Indonesia, Malaysia and Thailand, individually or collectively, will catch up in volume terms. Population-wise, this simply can’t happen.

And it is equally important to bear in mind that because of the scale of China’s manufacturing economy, from chemicals down to finished goods, the knock-on effects of slower growth in China across the rest of Asia could well be nothing short of huge.

Slower growth, sooner or later, seems to be the likely outcome of the plenum as China is forced to press ahead with economic restructuring.

As Jesse Colombo, the US-based economist, points out, much of the recent growth in Southeast Asia’s developing economies has been fuelled by very easy credit conditions in China. Take away that easy credit and countries such as Indonesia, Malaysia and Thailand will be in serious trouble – especially, if, at some point, the US Fed decides to taper.

We have also talked a lot about overcapacity across many industries in China. This is the result of all the ample and cheap financing, particularly since the Global Financial Crisis.

Surplus steel, aluminium and also chemicals plants won’t necessarily shut down, is something else we worry about. Jobs are at stake, especially in less-developed inland areas in China, and so local governments might successfully resist restructuring efforts by Beijing. Plants could run, even if they are failing to cover their variable costs, never mind their fixed costs.

Many manufacturing facilities are, in addition, “state of the art” thanks, once again, to all the lax financing. They thus enjoy economies of scale and technologies superior to many other competitors in Asia. ASEAN countries seem especially vulnerable now that import tariffs have been reduced as a result of the launch of the ASEAN-China Free Trade Area.

And so, as China slows down, the temptation and the ability to export production surpluses will both be substantial – as will the temptation by other countries to resort to inevitably counter productive trade protection measures.

Exporting of surpluses might already be happening in polyvinyl chloride (PVC). The above chart, from Global Trade Information Services data, shows that demand grew by just 2% in January-September this year compared with the same period in 2013. At the same time production increased by 12% and exports surged by 55%.

Many people keep reminding the blog of the undeniable good news: Even if China’s chemicals demand growth decelerates in percentage terms over the long term, the consumption base is now so big that there will still be significant growth in the extra volumes required.

But if chemical companies’ growth estimates for China prove to be too bullish, and also too linear in nature, will this volume- growth be enough to easily absorb all the new capacities being planned in the US, the Middle East and Asia?

Plus, there is the impact on growth across the rest of Asia to consider, as we have just discussed.