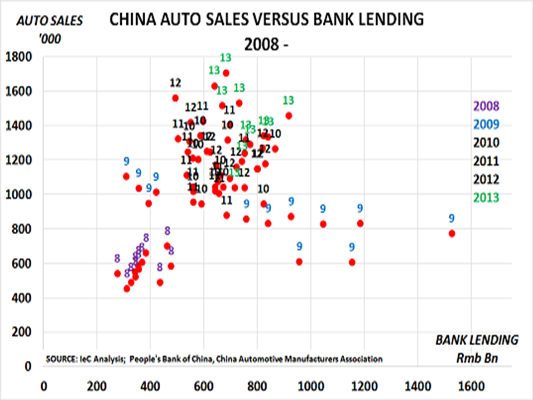 A lot of the focus in polyethylene (PE) markets at the moment is on supply and on what impact this might have on the key China market during 2014.

Crunching this data will always remain a crucial part of assessing all petrochemicals markets, but, in China, do we need other tools as well?

In the ethylene part of the chain, a heavy cracker turnaround schedule in Japan could raise feedstock costs for the non-integrated or partially integrated players. This excellent ICIS article details the maintenance work.

This could occur just as a substantial amount of new PE supply comes on-stream. New supply , again according to our colleagues at ICIS, includes:

But there persists a body of thinking that it is credit cycles that matter as much, if not perhaps even more, than supply in driving the short-term health of the PE market in China.

Despite substantial new PE supply in 2009-2010, PE returns in the China market were excellent because of the ample availability of credit, claim some industry sources. They argue that extra supply actually helped the market as an army of new traders – encouraged to enter the business by the surge in lending – could also easily get hold of resin.

“I remember thinking something was very wrong when I guy I had never heard of phoned me up from China and said he wanted to buy PE,” recalled a Singapore polyolefins traders.

“I knew something was amiss when I asked him, ‘what grade do you want?’ and he replied ‘any grade, just send me as much as you can as soon as you can.’ “

Then there was the PE demand-growth slowdown from April 2011 – perhaps mainly the result of a credit clampdown as Beijing tackled inflation.

Last year was, once again, a year of easy credit – firstly because of the explosion in shadow bank lending in Q1 2013 and then because of the July mini-stimulus package.  Maybe more lending is the main reason for the 14% rise in apparent demand growth (imports plus domestic production) from January until October 2013.

Has the cycle turned again? We think, quite likely, yes – although, of course, Beijing may decide to kick the can further down the road and deal with its economic imbalances later on.

We focus heavily on PE in our analysis as we think it can be a pretty reasonable proxy for other polymers and chemicals markets.  It seems possible, therefore, that the availability of credit has a significant influence on the health of not only PE in 2014.

More research is clearly needed, however, in an attempt to firm-up, or discount, the importance of credit availability in driving chemicals markets in general in China.

Meanwhile, as we carry out this research, see the chart above, which indicates what seems like a close link between lending in China and auto sales.

Is this also reflected in the pattern of demand for all the chemicals and polymers that go into autos?

As we said, watch this space.