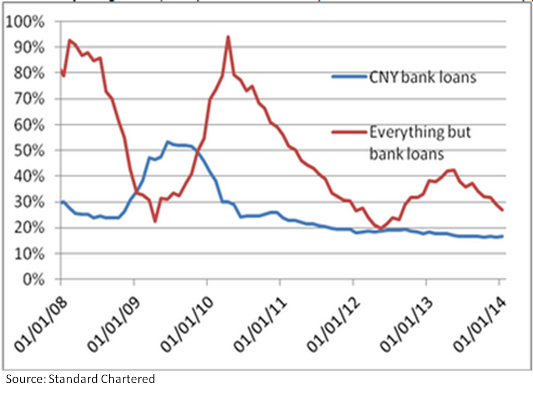 QUITE  a lot has been made of the announcement on Sunday that China’s total social financing (TSF) in January was 2.58 trillion Yuan, which was double December’s level on an anticipated month-on-month surge in official bank loans. TSF is the measure of credit issued via the shadow-lending system and the state-owned banks.

Remember, China’s old model growth can only continue to function, or rather dysfunction in the long term, if ever-more volumes of credit are pumped into the system. Thus, equity and oil prices rallied on anticipation that 2014 GDP growth might not, after all, fall off a cliff.

“But January is always a time when lending is ‘front-loaded’. Banks rush to lend as much as they can at the start of the year, just in case the political environment shifts and they see lending conditions tighten as the year progresses – in other words, they want to ‘lock in’ interest-rate earnings,” a Hong Kong-based banker told the blog.

“They are also always in a rush in January to satisfy a backlog of loan applications that accumulate towards the end of each year,”  he added.

For him, therefore, a much more valid comparison was between the growth of TSF in January 2014 and January of last year.

As the chart above shows, in year-on-year terms, the growth in official bank loans (the blue line) was pretty much flat -and there was a sharp dip in the expansion of shadow financing (the red line).

And so do the maths again: TSF would have to expand at annual rate of 12% in 2014 if  GDP growth is going to hit 7.5%, according to the Chinese Academy of Sciences – and, of course, this would still represent a slowdown from last year’s GDP increase of 7.7%. And yet, as we have just said, January’s TSF  only rose by 1.6%.

A further sign that the “blink” might well not happen this time around were reports that on Tuesday, the People’s Bank of China (PBOC) stepped into mop excessive liquidity, as the government felt that TSF growth in January was excessive, despite its modest year-on-year increase.

“China’s central bank has removed nearly $8bn from the money markets in a bid to control the amount of credit in the country’s financial system,” wrote the BBC in this article.

“According to reports, the People’s Bank of China (PBOC) did so by issuing 14-day forward bond repurchase agreements, also known as forward repos.”

It was the first time since last June that the PBOC had used forward repos to tackle excess liquidity, said the BBC.

“China has been looking to suck excess cash from its open-market operations to reduce the risks of shadow banking, or informal lending to businesses,” added the same article.

“Shadow banking has been identified as a major risk to China’s future growth, because of the possibility of large debts turning sour.”