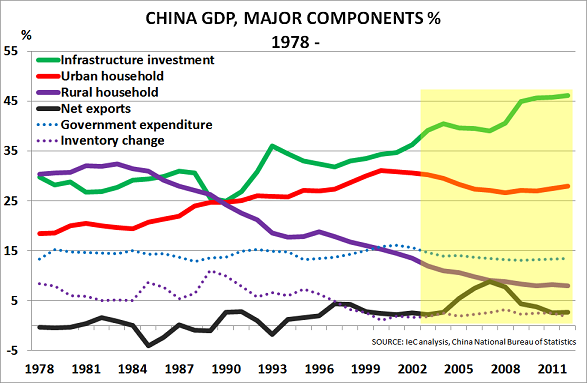 China has been primarily responsible for driving global growth since the Crisis began in 2008.  Auto sales, for example, would have seen negative growth world-wide without China.  And auto manufacturing is the world’s largest manufacturing industry.  The chemical industry has been in a similar position.  Whilst China is also now responsible for nearly 50% of global metal demand.

China’s growth has thus given a tremendous boost to the emerging economies, whose raw materials have fed its seemingly unlimited appetite for infrastructure investment.  In turn, this has boosted corporate earnings everywhere.  Currently, for example, around 50% of earnings for the S&P 500 companies come from operations outside the US.

Yet most of us have a very hazy idea about China’s economy and its population.  This week therefore, following the enormous interest created by its recent Research Note, the blog would like to present some key facts about its economy, and remove some myths about the wealth of its urban and rural populations.

It begins today by looking at the economy.  Contrary to popular opinion, this is now widely seen within China’s leadership as having suffered a “lost decade” between 2002 – 2012 (yellow shading):

This is why we are now starting to see radically new economic policies from President Xi and Premier Li.  They really have little choice.  As state-owned China Daily wrote last week:

“People always say China’s economic growth model is export- and investment-driven. But if you look at the data for the past two or three years, it is becoming solely investment-driven.  Exports in 2012 made a negative contribution to GDP growth, and if you deduct speculative funds disguised as trade payments, you’ll find that exports were a drag on growth again in 2013.  As the economy increasingly relies almost solely on investment, any slowdown in investment could curtail growth.”

The black line in the chart shows net exports, and confirms the point they are making.  China is no longer the “manufacturing capital of the world”.  Its exports peaked at 9% of GDP in 2007, and have since fallen sharply.  And no economy in the modern world has ever based its growth on infrastructure investment, for good reason.

The “answer” for the past 5 years has been to try and bridge the gap via a massive credit bubble worth $10tn (more than total GDP).  This covered up the problems caused by declining household spend by instead creating a ‘wealth effect’.  The US Federal Reserve did the same in 2002 – 2007 period, and created the sub-prime bubble instead.

The result of the policy was that China’s banks added $14.6tn of lending over the period, equivalent to the entire size of US bank loans.  And the US banks’ loans were built up over a century, not 5 years.  The sheer volume of this lending suggests credit checks must have been virtually non-existent.  Equally important is that the effectiveness of the lending in stimulating GDP growth has been falling sharply:

The only sensible solution is to cut back sharply on investment, whilst starting to boost consumption and household spending.  The former has to happen immediately, due to the risk created by the size of the credit bubble.  But the latter can only take place slowly.  Total household spend is, after all, only a third of GDP today.  As China’s Academy of Social Sciences has warned, clearly reflecting the views of the new leadership:

“To have more sustained and quality growth, we’ve got to let the growth rate go down.”

It also explains why Premier Li warned in his first press conference that the changes underway would “feel like cutting one’s own wrist“.  He was referring to a Chinese legend, in which a warrior who had been bitten by a snake cut off his hand to save the rest of his body

New Premiers do not normally start their term of office in this way.  The blog can only recall one other example in modern history – Winston Churchill’s first speech to the UK parliament on taking office in July 1940 as the Battle of Britain began:  “I have nothing to offer but blood, toil, tears, and sweat.”

The seriousness of the situation, and the dire warnings being given by the leadership about the necessity for change, suggest that the current debate over China’s likely level of GDP growth is missing the point.  As co-author John Richardson commented yesterday, “there is a distinct possibility that growth will be much lower than any of the consensus forecasts”. Zero growth at some point in the next 2 – 3 years would seem to be a prudent Base Case.

PREVIOUS POST "The dog ate my homework": excuses for economic slowdown
NEXT POST BBC reports 'How China Fooled the World'