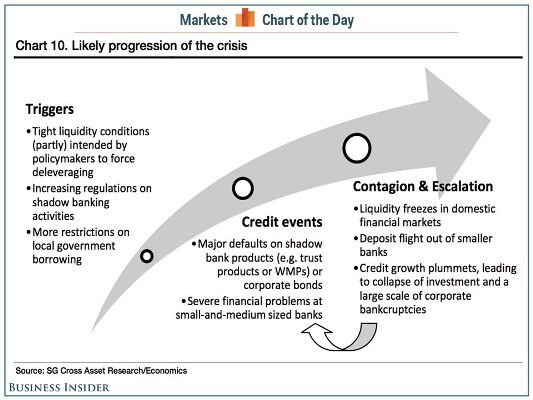 REMEMBER this time last year when a surge in credit availability occurred in China,  thanks to the shadow-banking system?

This helped support a pick-up in economic activity in the second half of the year, including stronger chemicals and polymers markets.

The People’s Bank of China (PBOC) seems determined to reduce the amount of speculative activity taking place in the shadow-banking system.

The following comments, published in the China daily and written by the Chinese Academy of Social Sciences, are worth repeating from Paul’s post:

If the PBOC maintains a tight monetary stance and loan rates stay high, economic growth will be constrained.  Cash-starved companies will result in a contraction in business activity, with the Purchasing Managers’ Index for manufacturing likely to slide below 50 in the second quarter.

If the PBOC loosens monetary policy to push down borrowing rates, it will have to achieve total social financing – a broad measure of liquidity – of more than Rmb 19tn ($3.14tn) to support GDP growth of 7.5%.

“But that amount of total social financing would represent 12% year-on-year expansion, much faster than last year’s gain of 9%.  An increase of that scale will cause massive macroeconomic risk, because non-performing loans will pile up faster and the goal of reducing the economy’s reliance on credit-fuelled expansion will recede even further into the distance.  To have more sustained and quality growth, we’ve got to let the growth rate go down.

In other words, the rate at which credit is expanded (total social financing comprises lending via the shadow system and “official” credit supplied by state-owned banks) would have to be increased in 2014 in order to achieve 7.5% growth – the government’s target for this year.

Even if Beijing ignores the above advice and manages to hit its 7.5% target, this would still represent China’s lowest growth in 15 years. Last year, GDP growth was 7.7%.

The Chinese Academy of Sciences isn’t just any other leading Asian think tank. It is affiliated to the State Council – the Chinese government’s top administrative authority – and so an important message is being sent out here.

Where do we go from here?

The consensus view – perhaps mainly because we have never been here before – is that the Chinese government will engineer a soft landing in 2014, even if credit ends up being a little tighter than had been expected.

But what if this consensus view is wrong?

“Government efforts to engineer a deleveraging could lead to a hard landing in China, if the policy response is misjudged,” warned Wei Yao, Hong Kong-based economist with Societe Generale.

She defines a hard landing as GDP growth of as low as 2%..

Leverage in the shadow-lending sector would decline further as the government targeted wealth-management products (WMPs) and interbank transactions that were being used by smaller banks to mask losses on corporate loans, Wei added.

We will look at the crackdowns on interbank lending – and also on the misuse of trade finance – in  detail in later posts.

We will also look at how tighter credit conditions are already affecting a major end-use market for chemicals and polymers: Housing.

Meanwhile, the above chart, which we will also revisit in a lot more detail in later posts, provides a summary of how this crisis might evolve.