Home Blogs Asian Chemical Connections China: One “Blink” And We Are Back To Normal

China: One “Blink” And We Are Back To Normal 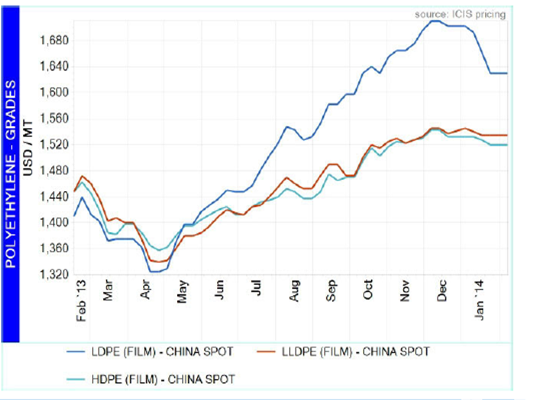 Temporary factors might be behind the weakness in China’s polyethylene (PE) market that has been highlighted by our colleagues at ICIS pricing. Last week, pricing in China was either flat or declined on bearish sentiment (see the above chart).

One temporary factor could be the traditional post-Lunar New Years shortage of workers in China’s manufacturing heartland.

As was the case last year, many thousands of workers are choosing not to return from their family homes in the countryside because of better job prospects back home and rising costs in China’s southern and eastern coastal provinces. Tight blue collar labour markets, the result of China’s one-child policy, are also enabling workers to be a lot more selective over wages and working conditions.

But a source with one global PE produced said that after each New Year break, it was  getting harder and harder for his customers to find enough workers to get their operations going again.

“Average operating rates at the converters that we have surveyed are lower than at the same point in time after the 2013 New Year break,” he added.

A question which, therefore, needs to be asked is: To what extent are these labour shortages a long-term issue? If more and more people are each year choosing to remain in their family homes, then logically the total supply of migrant workers is on the way down.

This article, from China’s government-run Xinhua wire service, which appeared on 11 February, provides some statistical weight to above argument.

“Some of my customers have chosen to quit China for Vietnam because they are both struggling to find enough workers and afford much-higher salary and benefit packages,” said a source with a second PE producer.

Then there are, of course, the now increasingly well-documented concerns that China’s economy is slowing down as a result of the government’s determined efforts to rebalance the economy. We warned that this might happen late last year – and at that point flagged up that a key issue in 2014 would be credit availability.

“Some of my customers are struggling to open letters of credit (LCs). I am also hearing that Japanese traders are being much more careful about who they supply LCs to because of the increased risk of corporate failure,” added the source with the first PE producer.

And it is easy to find plenty of economic data pointing in the wrong direction.

“From falling power consumption to record-low steel prices, a clutch of indicators show sluggish investment and domestic demand are weighing on China’s $9.4 trillion economy, a worrying sign for some economists who are cutting their GDP forecasts for 2014 – which is unusual so early in the year,” wrote Reuters in this 17 February article.

“Just last week, steel prices slumped to a record low of 3,380 Yuan a tonne and iron ore prices dropped to a seven-month trough. Cement prices hit a two-month low of 350 Yuan a tonne in January, according to China Construction Bank.

“Analysts think much of the drop in demand is the result of provincial and local governments, who having chalked up at least $3 trillion in debt, meeting stricter orders from Beijing to cut graft and frivolous investment, including building flashy offices for themselves.”

But this might all be temporary again. The default position of many economists and financial analysts quoted in Bloomberg, Reuters etc is that Beijing will “blink”. They think that stimulus will be increased in order to achieve 2014 GDP growth of at least 7%.

But what happens to this China base case – which is also shared by  some polyolefin producers –  if Beijing doesn’t blink?

PREVIOUS POST China: Do The Maths On 2014 GDP Growth
NEXT POST BBC: "How China Fooled The World"