Home Blogs Asian Chemical Connections China: “Just When I Thought I Was Out….”

China: “Just When I Thought I Was Out….” 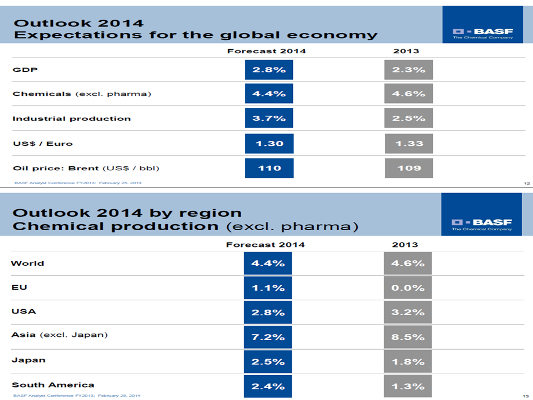 THE BLOG woke up this morning determined to write about something else, but, as Michael Corleone said in Godfather III, “just when I thought I was out, they pull me back in”.

What stopped us writing about US propane prices and what this might mean for Chinese propane dehydrogenation-polypropylene (PP) start-ups this year were yesterday’s comments by BASF – the world’s biggest chemicals company.

BASF isn’t the world’s biggest and also one of the most successful chemicals companies in the world for nothing. One of the very good reasons it is that it is packed with thousands of people a lot better educated,better informed and brighter than the blog.

And so when BASF speaks, the blog tends to listen – intently.

Thus yesterday, in its Analyst Conference for the full-year 2013, it presented the two tables above.

As you can see, BASF expects global economic growth of 2.8%  this year compared with 2013, and growth in global chemicals production – excluding pharmaceuticals – of 4.4%, a slight dip on the 4.6% generated in 2013.

It also expects Asia to once again be the powerhouse of global growth, as it sees ex-Asia Japan chemicals production rising by 7.2% in 2014, down but not that significantly from 8.5% in 2013.

“We do not expect strong tailwinds this year either. Nevertheless, we are cautiously optimistic with regards to global economic development. The world economy is expected to grow slightly faster in 2014 than in 2013, despite continuing volatility,” said the company’s CEO, Kurt Bock.

BASF is forecasting somewhat higher growth in key customer industries such as the transportation, consumer goods and electronics industries on a global basis.

It might well be that BASF, and other chemicals companies, see lots of upside in China that we are missing – perhaps, for instance, around its efforts to achieve more environmentally sustainable growth.

And it might also be the case that we have been overplaying the importance of credit creation in driving GDP growth in China in 2014.

But to repeat, at the worthwhile risk of boring you, we continue to worry that:

Societe Generale thinks that China’s GDP is likely to grow at 6.9% this year.

But it assigns a 20% probability to an economic hard landing, which would amount to this: China’s GDP growth falls to 3.8% in 2014, bottoming out at an annualised 2% for two quarters, which would shave as 1.5 percentage points off global GDP growth that same year.