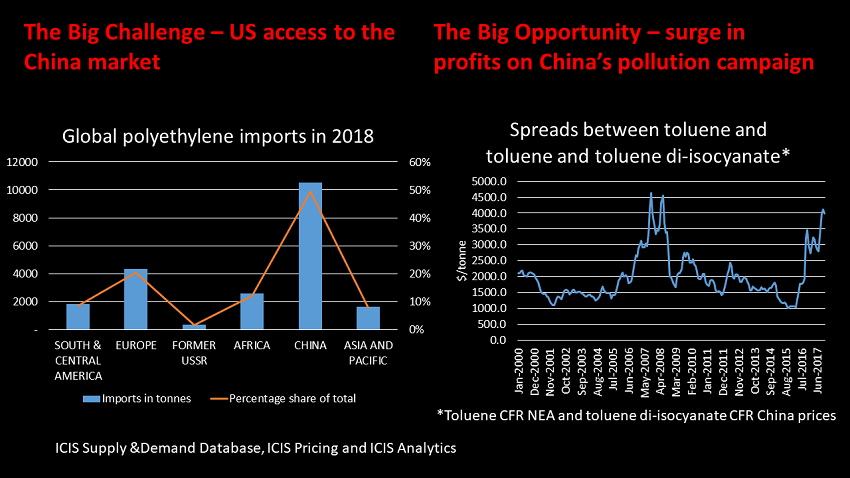 THERE will perhaps be two headline directions for the global chemicals and polymers industries in 2018:

The case for major problems in the global PE business

The US PE industry is, all investors should know by now, set to see the commissioning of the biggest wave of new capacity in its history.

If export markets are strong enough to absorb this surplus, then there will no major problems for the global PE industry. But as I discussed on Monday, there is a viable scenario where the key China market is entirely shut-off to US exporters because of increased US-China trade tensions.

Why does this matter? Because China’s imports count more than any other country or region in the world a result of the scale of its deficits. China is set to import 10.5m tonnes of PE in 2018 as the above chart illustrates, 49% of the global total of imports for that year.

The problem for the US is that it is starting from a weak position in China. Last year, only around 5% of the country’s PE imports were sourced from the US.

So, even without China being closed off to the US, the challenge for the US is how to grow market share in China. And from the Chinese perspective compensating for that 5% of imports would probably not be a big challenge, if it were to fall out with the US over trade. China would be able to make up for the shortfall through sourcing extra volumes from the Middle East and Southeast Asia etc.

But let’s assume that the Doomsday scenario described above, of the China market being entirely closed-off to the US, doesn’t happen. It didn’t happen last year despite gloom of January 2017, when a US-China full-blown trade war looked a very strong possibility. In the event of no change in US-China trade relationships, the US  still needs to grow market share in China.

China’s overall PE import growth was very strong in 2017 over 2016. But instead of sourcing big extra volumes from the US, it instead increased its imports from fellow One Belt, One Road (OBOR) members, most notably, feedstock-advantaged OBOR members in the Middle East. This indicates that as a hedge against a breakdown in US-China trading relationships, China has already accelerated its economic integration with other OBOR members.

It is hard to see why China would change this approach in 2018, given the protectionist stance of the White House. That would leave the US battling for extra market share in other less significant exports markets, hence the potential for substantial margin compression.

These are only some of the reasons why I think the global PE industry could face difficulties in 2018. For full analysis – and for advice on how you should respond – read this month’s PH report.

The second of the two charts at the beginning of this blog post, on the right, is taken from my latest ICIS Chemical Business China Monthly article. Click here to read the article.

The spread stood at more than $4,000 tonne in October, which was the highest since May 2008. TDI is used to make flexible polyurethane foams and so goes into a downstream sector where demand has been booming, thanks to China’s booming consumer spending.

This is just one many value chains where chemicals supply has been tighten, and so profits have soared, as a result of China’s battle against its pollution crisis.

This battle has taken the form of the temporary or even permanent closure of chemicals plants in breach of environmental regulations. Enforcement of pollution laws has been stepped up through wave after wave of nationwide inspections by central government officials.

A record number of local government officials have also been disciplined for failing to adhere to regulations. And in a carrot and stick approach, promotion of local officials are being measured by hitting targets to reduce pollution rather than targets for GDP growth.

The permanent closure of chemicals plants has been part of not just the environmental campaign. The shutdowns are also directed at reducing overcapacity in some chemicals sectors, getting rid of plants with poor economies of scale and relocating plants from urban areas to chemicals industry parks.

Why haven’t a large number of Chinese PE plants been shut down? Because most of China’s PE plants have good economies of scale and have high environmental standards. And as the import data show, PE is far from being an oversupplied sector in China.

Other value chains that have benefited from the environmental campaign include chlor-alkali (the production of chlorine and caustic soda). NEA caustic-soda pricing in November was at its highest level since at least January 2007, when ICIS Pricing began this price quote.

The indications from our ICIS China team is that the environmental battle will continue, and will quite possibly intensify, during 2018 because dealing with pollution was one of the five key objectives outlined in last October’s 19th National Party Congress.

How do you spot the chemicals value chains that are set to remain tight, or tighten even further, as a result of the environmental campaign? You need to subscribe to the ICIS dashboard with its wealth of pricing and other data, and its news service.