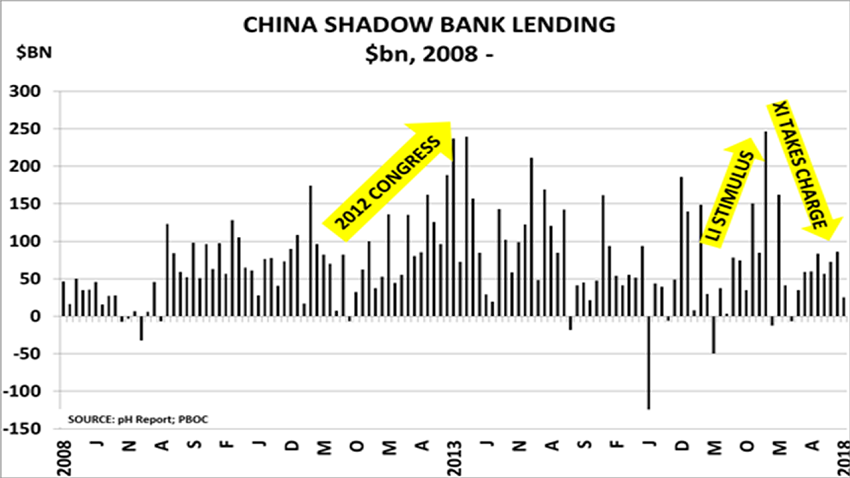 THE trend that I identified last August is continuing. China is in the midst of a major contraction in lending via its highly unregulated, and so very risky, shadow banking system.

Last year we saw a big fall in shadow lending, but now it has totally collapsed. In January, shadow lending was its lowest level since January 2009 at just $25 billion, and it was 90% lower than in January 2017.

Why January 2009 is significant is that in that month China’s huge economic stimulus rescue package – a response to the Global Financial Crisis – was only just underway. So, in effect, the government has gone back to square one, which is the availability of leverage via unregulated finance that existed before the rescue package.

Nearly all the media commentary on China’s lending data for January missed the sharp fall in shadow lending.

There was also a heavy focus on how total social financing (TSF) was hugely higher in January versus December. TSF is a measure of lending via both state-owned banks and the private shadow system.

But this month-on-month comparison is, I believe, not helpful as December is always a month when loan disbursement are low because annual lending quotas allocated by the government are close to exhaustion. January then sees a big uptick because of the issuing of new quotas.

What for me is more relevant is year-on-year comparisons of TSF. In January of this year, TSF was at Yuan3.1 trillion versus Yuan3.7 trillion in January 2018 – a 19% decline.

A lot has also been made of the all-time record disbursement of yuan-denominated loans in January this year. But this was partly, if not largely, a function of growth in regulated loans increasing as the state-owned sector took up the slack of the government-engineered collapse in shadow banking.

This confirms that China’s deleveraging process continues as a result of an important shift in political influence:

From May of last year onwards, as shadow bank lending started to contract, Chinese companies that had been heavily reliant on the shadow sector for their financing turned to the dollar lending market.

For example, Reuters reports: The amount of offshore dollar corporate bonds issued by Chinese corporates doubled in 2017 to $211 billion.

This trend looks set to continue despite higher Fed interest rates, according to Fitch Ratings, quoted in the same Reuters article: The clampdown on some types of bank credit, particularly shadow banking and interbank activities, has pushed up corporates’ funding costs in the onshore market.

Investors in the off-shore dollar market seem to be eager to lend because of their chase for yield. The search for yield is in response to nearly a decade of record-low interest rates. These low rates are the result of Western central bank economic stimulus packages.

The eagerness to chase yield has extended beyond just China, as borrowers across emerging market in general have taken advantage of low interest rates and a weaker dollar. Up until October of last year, Business Insider reports: In total, emerging market governments and companies have issued $509 billion in dollar-denominated bonds so far this year, a new record.

Dollar-denominated junk bond issuance in the developing world has hit a record $221 billion so far this year, up 60% from the total for the entire year 2016, according to the Wall Street Journal.

And yesterday’s Financial Time details the latest research on 21 emerging markets by the Institute of International Finance. The research finds that  these 21 countries quintupled from $12tn in March 2005 to $60tn in September last year. In relation to GDP, debts rose from 146% to 217%. Most of this debt is fortunately in local currencies, but there has of late been a sharp rise in US dollar-denominated debts.

What happens next? This is how events could unfold in eight phases. As always, I could be entirely wrong here. This is just a scenario. But I believe that chemicals companies would be well-advised to take these risks into account:

The direct effect on China

China should be able to emerge from this scenario with only a moderate economic slowdown.

It should be able to manage its bad debt problems without suffering a financial sector crisis, given that it is already tackling the issue head on. Sure, some Chinese corporates might suffer major financial problems, even bankruptcies, but the rest of the economy will probably be strong enough to endure these losses. Probably……

China’s government might also be quite happy to tolerate an easing back in growth as this would be in line with a.) Dealing with bad debts and b.) Tackling the pollution crisis as the focus increases on quality over quantity of growth.

I thus see Scenario 2 of my three scenarios for China being the most likely in 2018. But even a moderate Chinese slowdown would add greatly to the downward pressure on global growth.