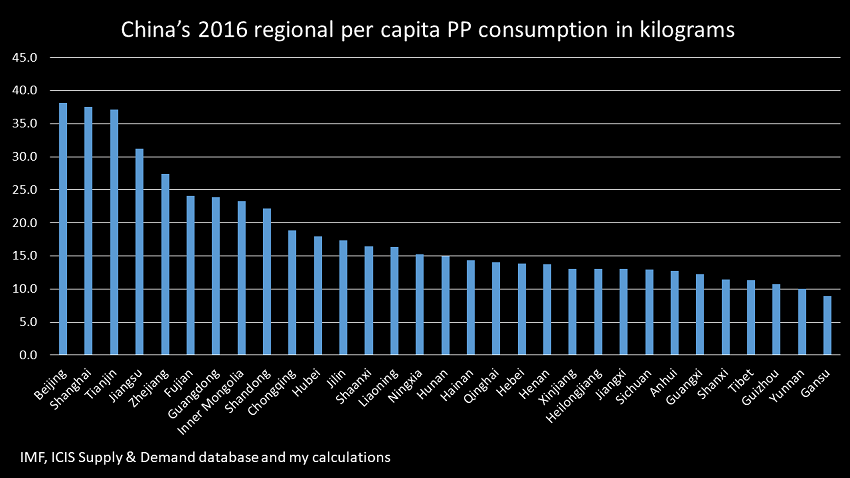 How long did it take the US, Western Europe and other developed economies to reach their current level of per capita consumption? From these rates of increase, it is possible to guesstimate how long, say, China will take to catch up.

In developed markets, per capita consumption has in the past also peaked and then declined on income growth levelling off, better grades of polymers that require less resins to achieve the same performances and more recycling etc. It is thus possible to look at these historical patterns to predict when this will occur in developing markets, and to work out pace at which consumption will decline in China etc.

Let’s use the US and China and polypropylene (PP) as examples. US per capita consumption grew from just 5.5 kilograms in 1978 to a peak of 21.6 in 1999, according to my calculations of the data in the ICIS Supply & Demand database. Since then, though, per capita consumption had edged down during most of the years until 2017. This left 2017 consumption at 19.6 kilograms.

Meanwhile, China has seen quite stunning growth, especially since 2001. Two pivotal events have driven PP and polymers consumption growth in general since then.

China joined the World Trade Organisation WTO) in 2001, resulting in the lifting of the quotas and tariffs that had restricted China’s exports to the West. Before 2001, China was already the low cost workshop of the world, but this role became even more established after WTO membership. Then came the post-Global Financial Crisis economic stimulus package that further turbocharged growth in polymers demand.

China has seen PP per capita consumption rise from just 4.3 kilograms in 2001 to 18.7 kilograms in 2017.  China therefore seems likely to reach the 1999 US peak of consumption very soon. Perhaps consumption growth will then begin to slow down and decline – assuming, that is, you want to draw a straight line between the development of these two economies.

And in terms of tonnes, China’s consumption is now often in excess of many developed markets.  Take PP again as an example. In 2001, Chinese demand was 5.4m tonnes compared with 8.6m tonnes in the US. We estimate that last year China consumed 26m tonnes versus 8m tonnes in the US.

Analysis needs to go much deeper than this

Whilst headline, nationwide numbers for China’s polymers consumption good start, they should not be the finishing point. We are thus working on assessments of polymer consumption levels across China’s different provinces and other administrative regions.

The above chart is my preliminary attempt at this type of analysis:

This, as I said, is just a preliminary attempt to show regional variations in consumption and so may well be wrong.

But the chart does tell us that the east coast provinces are close to or beyond maturity, at least in commodity grade of PP. Future success in these provinces might involve focusing higher-value grades of PP. But as you move further west, the potential for future growth in commodity grades increases.

The pace of consumption growth in these poorer provinces and regions will be determined by the effectiveness of government policy initiatives aimed at dealing with income inequality. This has become a top government priority as 500 million Chinese citizens – 36% of the population live on less than $5.50 a day, according to the World Bank. In 2016, 43.35 million people lived below Beijing’s poverty line.

Most things in China circle back to government policy and yet far too much analysis overlooks this critical areas.

And as I argued last week – using polyethylene as an example – any number of outcomes are possible in China’s polymers markets, with the pace of inland consumption growth just one of many variables.

PREVIOUS POST Stock Markets: Real Implications For Petchems and Risks Of A "Cynical Bubble"
NEXT POST US Import Tariff Decision: Impact On Polyethylene And The Global Economy