US Import Tariff Decision: Impact On Polyethylene And The Global Economy 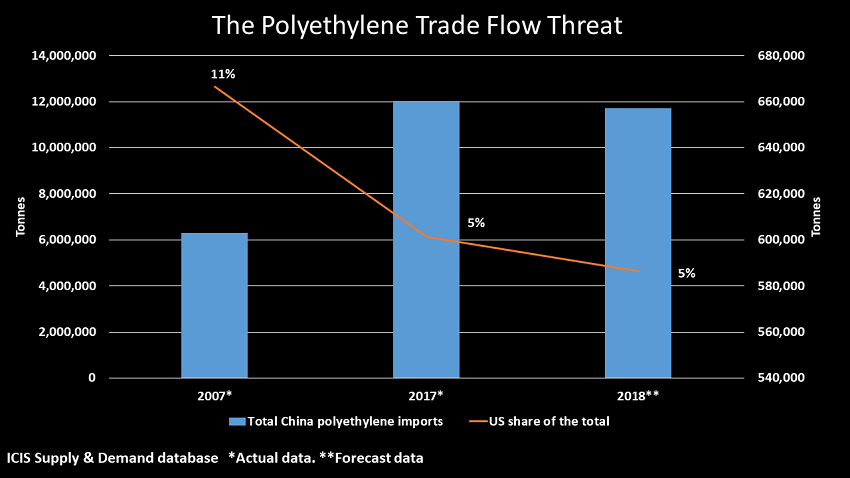 THE PROSPECT of a US-China trade war has edged closer as a result of President Trump’s announcement yesterday that the US will impose 25% import tariffs on steel and 10% import tariffs on aluminium. Countries hit hard by the tariffs will include China and Canada.

We luckily avoided a trade war in 2017 despite the strong protectionist rhetoric of the White House, but towards the end of the year tensions increased.

Sure, we may not end up in a full-blown trade war with all of its severe ramifications for petrochemicals and polymers trade flows and the global economy. But at the very least, trade tensions might build between the US and China as a result of the steel and aluminium tariffs.

And as I have been arguing since the November 2016 US presidential election, petrochemicals and polymer companies need to stress test their business models under a scenario where we do end up in an all-out trade war.

The Dow Jones was down by 1.7% following President Trump’s tariffs announcement. The stock market may soon bounce back and move on to new highs. But the tariff announcement serves as another message to petrochemicals companies, which is this: Any number of events could so easily bring the economic house of cards down, as the underlying fundamentals of the global economy are far weaker than conventional thinking assumes.

Vulnerability of US polyethylene

What mightnow happen to this 586,000 tonnes? Will China seek to source all of this PE requirement from fellow Belt and Road Initiative (BRI) countries if we end up in a full-blown trade war? (The BRI, by the way, used to be called One Belt, One Road).

The US would then face the choice of cutting back on production or raising sales in other smaller export markets, such as Europe, Southeast Asia and Latin America. It seems likely that it would choose the latter option because of its low feedstock costs. This would place a lot of downward pressure on pricing and margins in these other regions.

The PE industry could be fine, of course, in terms of its export trade to China. If  a trade war happens maybe only US agricultural exports to China, such as soybeans and pork, would suffer. This would still, though, leave the damage a trade war would cause to the global economy and global PE demand growth.

Or perhaps trade tensions will simmer down with everything returning to normal. But the background risk of a US-China trade war would remain because of the protectionist approach of the White House.

This would continue to encourage China to seek more and more of its petrochemicals and polymer imports in general from fellow BRI country members, making it harder for the US to grow its share of the vital Chinese PE import market.

The US needs to grow its share of the China PE market as no other country or region can comfortably absorb growing US exports. From 2018 until 2025, US linear-low-density PE total exports will for example increase from around 1m tonnes to 4m tonnes – again, according to the ICIS Supply & Demand database.

A problem for the US is that in percentage terms, it has actually lost ground in China over the last ten years: In 2007, it accounted for 11% of China’s total PE imports, whereas, as I pointed out above, the US accounted for only 5% of imports in 2017.

Even in the best of likely circumstances, therefore – which is an improvement in the US-China trading relationship – the US may struggle to raise its share of the China market.

I must again stress that all the above just represent some outline scenarios of what could happen to the global PE business. For more detailed and wide ranging scenario planning in refining and petrochemicals in general, contact our ICIS Consulting team.