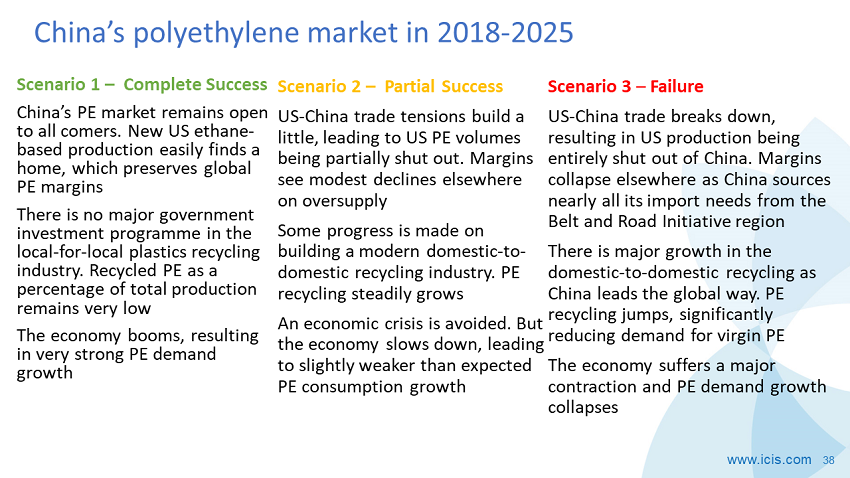 THE above slide underlines the growing complexity surrounding China’s economy, politics, society,  environmental policies and trading relationship with the US. I’ve placed this complexity in the context of the implications for the polyethylene (PE) industry. The above slide, and the full explanation below, updates my three scenarios from last September.

These new scenarios further challenge the “business as usual” base case assumptions for PE in the ICIS Supply & Demand Database. They are as follows:

For essential work on building alternative scenarios, taking into the account the variables identified on my chart, contact ICIS Consulting.

What has and hasn’t changed over the last year

A year ago, there was much less focus by Beijing on quality over quantity of growth. Few people then had any idea of the huge shake-up manufacturing that was to occur during 2017 as a result of China’s environmental clean-up. Now many of the old assumptions need to be challenged about China’s commitment to a cleaner environment.

12 months ago there was less talk by the government of tackling the economic “left behinds’ – the 500 million people, or about 40% of China’s population, who live on less than $5.50 per day, according to the World Bank. Now, though, dealing with rural poverty is a top priority. This will become even more transparent during next month’s National People’s Congress – China’s annual parliamentary meeting.

Potentially, therefore, greater ending to rural communities, and other measures including reforms of the agricultural sector, will lead to a big boost to economic growth. Just think of the rise in consumer goods sales that would result from this 500 million people enjoying even a modest rise in their income levels.

But what we already knew a year ago is that China faced a significant bad debt problem. After a period of renewed economic stimulus, the Xi Jinping-led economic reformists are dealing with this problem through a 90% fall in shadow bank lending in January of this year versus January 2017. This poses the risk of a major dent to GDP growth from reduced lending via the shadow banking system, with a full-blown bad debt crisis also still possible.

China is at further risk from a strengthening of the US dollar that could accompany a global economic slowdown. This might lead to bankruptcies of Chinese companies that are ever-exposed to dollar lending. Meanwhile, of course, lower global growth would also hurt the Chinese economy.

Back to the environmental issue. A good argument can be made that the clean-up campaign will boost the economy by creating lots of new jobs in renewable energy, and in new home-grown technologies to reduce air, water and soil pollution from factories. These new jobs will also be higher value and thus fit perfectly with China’s efforts to escape its middle-income trap.

But, assuming that this view is right, what about the short term impact on growth of the closure of highly polluting and economically inefficient chemicals, steel and aluminium plants etc.? Will the loss of jobs in these industries be greater than the new jobs created and might this depress short- term growth?

Again on the issue of the environment, is our base case for PE recycling too conservative? What if the actual number is 16% or more by 2025? This would obviously mean less demand for  virgin PE. A scenario is that there will be major government investment – billions of dollars – in restructuring a highly disorganised recycling industry. This investment would both help tackle China’s plastics rubbish crisis and would create lots of higher-value jobs.

Most of today’s debate is around the boost to virgin PE and other virgin resins consumption from the ban on imports of plastic waste. Clearly, though, as this ban was motivated by the desire to protect the environment from plastic waste, we have to think through the longer-term implications of this same objective being applied to the domestic-to-domestic recycling industry.

There is also the perennial issue of whether or not our forecasts of virgin resin production are accurate. Our base case is built around the new PE projects we believe are going ahead. But add in the speculative capacity in our database and the picture looks considerably different. We are also course the same as every other forecaster in not knowing how many unannounced crackers and coal-to-olefins projects may end up being on-stream by 2025.

It is important to stress that the three scenarios on the chart are fluid – i.e. any of the events could flip over from one outcome to the next.  For example, the economy may be fine, resulting in our base case forecasts for consumption growth being reasonably accurate (our base case is built on a healthy economy). We could also be pretty much right on virgin versus recycling production growth.

This would still leave behind the impact on the PE industry of another uncertainty that was around 12 months and is still relevant today – the US-China trading relationship. If the relationship deteriorates then China may end up closing its markets to US PE imports.

This would squeeze the margins of producers in other export markets even in the best of economic circumstances, as the US has to have access to the China market if it is to comfortably place all of its new production.  The One Belt One Road programme, now renamed the Belt and Road Initiative, gives China the option of being close to entirely self-sufficient in PE inside this new geopolitical, economic development and free trade zone.

The detail might be wrong, but that’s not the point

Sure, the detail of my scenarios might well be wrong. I may have overemphasised or wrongly identified certain variables whilst entirely missing out other variables.

But this isn’t the point. The point is the debate itself. We need to challenge today’s Panglossian, one- dimensional conventional thinking that all is right with the global petrochemicals and polymers industry. The reality is much more complex than that that.