US-China Trade Dispute: Pause For Breath Does Not Mean End In Sight 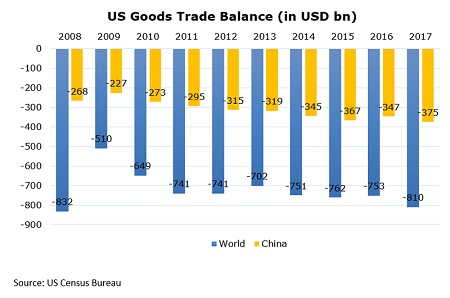 Confused? You might well be if you’ve read the news reports following the US-China trade meeting in Washington last week.

The immediate threat of a trade war looks as if it has been averted. China’s top envoy at the trade talks, Liu He, said that both sides had agreed for the time being not to impose any of the tit-for-tat tariffs that they had threatened in early April. These include 25% Chinese imports tariffs on US low density polyethylene (LDPE) and linear-low density PE (LLDPE).

But none of the details of the outline agreement announced after the Washington talks have been thrashed out. Those details are due to be decided in another round of discussions set to take place in China. If both sides fall out about the detail then we will be back to square on.

What is also unclear is how President Trump will sell any trade deal with China as a victory to his supporters. Selling a victory is important for the president if his Republican party is to do well in the mid-term elections in November.

Asking China to do the impossible

If China agrees to reduce tariffs on US imports this wouldn’t by itself make much difference to the big US trade deficit with China, as the US manufacturing sector doesn’t make a lot of the goods that China needs. But unless the trade deficit is reduced by at least 50% from the annual $375bn, it is hard to see how President Trump can claim a victory.

This dilemma for the White House was highlighted by confusion over US claims that China had agreed to lower the trade deficit by $200bn. Mathematically that seemed impossible because, as I said, the US doesn’t make many of the goods that China actually needs. The only way that China could come close to that target is if it stopped buying microchips etc. from other countries such as South Korea and Japan in favour of the US.

This would increase trade tensions between the US and other trading partners. And would China really want to damage its relationship with a country such as South Korea, which could be a vital source of the high value technologies it needs to escape its middle income trap, especially as access to these types of technologies from the US is now under threat? This seems doubtful.

In any event, the $200bn agreement announced by the US turned out to not to exist as China later said that no such deal had been reached.

A US-China trade deal can also only happen if the US abandons its demand that China stops heavy government subsidies for hi-tech industries such as aerospace, robotics, microchips and advanced industrial machinery. Acceding to this demand is impossible for China as it would mean economic stagnation. China would fail to escape its middle income trap.

But if the White House drops this demand then President Trump will face heavy criticism from fellow Republicans as well as Democrats. Politicians from both parties link China’s support for hi-tech industries with US national security, as they claim that government funding is being used to boost China’s military.

They also see China’s “Made in China in 2025” campaign, the government-funded drive to move up the manufacturing value chains, as an almost existential threat to US economic advantage, which rests on its superior position in hi-tech industries.

An illustration of the perilous waters for the president is the case of ZTE, the Chinese telecoms company.

The company was banned from buying US components because of allegations that it had done business with Iran and North Korea, breaking US sanctions, and that it was a threat to US national security.

ZTE had to as a result suspend operations until Chinese president Xi Jinping phoned President Trump and asked for a reprieve. President Trump then ordered the restrictions to be relaxed, perhaps in the interests of creating a favourable atmosphere for last week’s trade talks. This has led to heavy criticism from Congress.

If the president responds by re-imposing the restrictions on ZTE this will jeopardise a trade deal with China; if he doesn’t, he will be accused of going back on his principles. Heads President Trump wins and tails he loses.

Seeing through the confusion

Arthur Kroeber, research head at Gavekal Dragonomics, told the South China Morning Post: “It is possible that all this back-and-forth [visits and talks] will allow a reduction or delay in the tariffs that the two sides have threatened … but it will also be cosmetic.”

He added that over the past five years, China had emerged as a much bigger geopolitical and economic competitor to the US. This had had led the American foreign policy and security establishment to conclude that China was “now in a long-run strategic competition with China for technological and military superiority, and for dominance of the global economic system”.

This is exactly right. Even if we get away without a trade war on this occasion, further trade disputes between the US and China seem inevitable.

And in the short term, we cannot rule out the possibility that in order to please his supporters, President Trump will push China to the point where it walks away from the trade talks.

We could thus still end up in a full-scale US-China trade war over the next few months. This would force US LDPE and LLDPE producers to divert exports to markets other than China. Five would not go into four. The resulting oversupply in other export markets such as SEA and Europe would be severe.

A US-China trade war might also occur as US trading relationships with the EU deteriorates. Relationships have been severely strained by the US decision to pull out of the Iran nuclear deal. European companies face renewed US sanctions on Iran. If they comply they will lose a lot of business and if they don’t comply, they will face very heavy fines.

The end result would be a global trade war and so of course a global recession. Let’s hope not, but it is best to prepare for this possibility. And even if we get away with no trade war in 2018, you must assume a much more regional world for petrochemicals trade flows as America and China compete for influence.