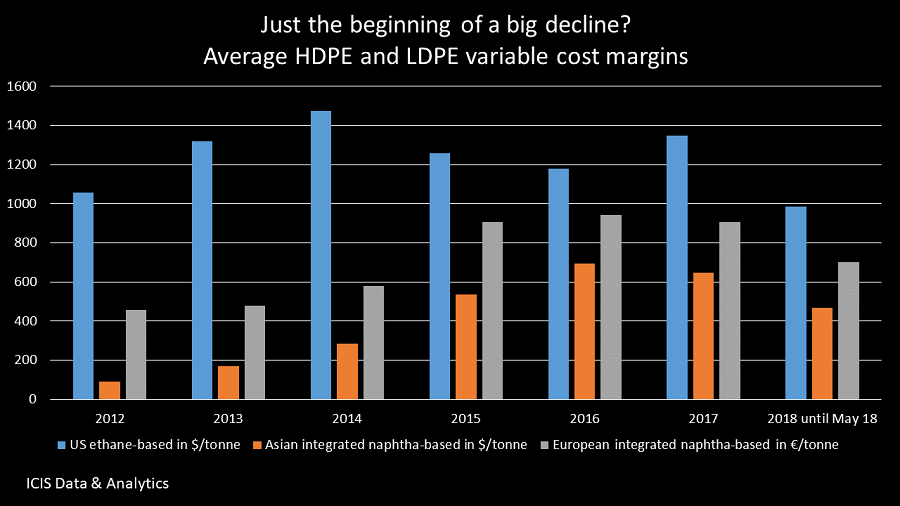 THE consensus view is that whilst global polyethylene (PE) margins have further to fall from their levels so far in 2018 (see the above chart), they will not get that much worse. It is thought that the PE downcycle will be brief and very shallow because of booming global demand for PE as the developing world gets richer.

Hundreds of millions more people rising out of extreme poverty guarantee that extra supply will very quickly and easily be overtaken by additional demand, it is argued. These hundreds of millions will be earning enough money to buy modern-day consumer goods for the first time, which are often made from or packaged with PE.

And whilst developed markets such as the US and Europe are not going to see much demand growth for PE, the majority view is that a healthy global economy will at least ensure that growth will be positive and not negative in these mature markets.

Supporting this opinion is recent history. Last year, a sharp retreat in margins was being forecast by some. But that didn’t happen because of strong momentum in the global economy and delays to US start-ups resulting from Hurricane Harvey.

Further colouring the consensus view is the excellent period of profitability that was enjoyed by the global industry from H2 2014 until the end of last year. The global economy was reasonably healthy, no major PE supply additions took place, and oil prices were low. This resulted in:

When you have lived through such a strong and extended period of profitability, which some producers say is the best in the history of the PE industry, it can be hard to imagine anything very different.

Another problem is internal company politics. New investment announcements continue at apace. Those who work for the companies that have made these announcements who harbour doubts could be reluctant to challenge consensus optimism for fear of damage to their careers. And for others, if the CEO says everything is fine, then everything must be fine.

I believe that the consensus is wrong and we instead face a collapse of PE margins.

“Oil prices now represent 3.1% of global GDP, based on latest IMF data and 2018 forecasts. This level has been linked with a US recession on almost every occasion since 1970. The only exception was post-2009 when China and the Western central banks ramped up stimulus,” writes fellow blogger Paul Hodges.

The problem now, though, is that stimulus is being withdrawn by the Fed because it mistakenly believes that all is good with the global economy. And China, the biggest global source of stimulus since 2009, is on the same track: Shadow banking, which is lending via private and highly speculative lenders, was down by 64% in January-April compared with the same period last year.

Xi Jinping is unlikely to change course, as he has the political will and the political means to achieve one of his top objectives – reducing financial risk through deleveraging. This will mean lower GDP growth in China – hopefully, only moderately lower if we can avoid a global recession.

A further risk specific to the PE industry is de-globalisation – the fragmentation of global markets into highly protected trading blocks.

The US and China have paused for breath in their potential trade war. But nothing has been agreed between the two countries except an agreement to continue talking.

We might therefore still see China impose its 25% import tariffs on US LDPE and LLDPE, which would force the US to concentrate exports on other smaller deficit regions such as Europe and Southeast Asia. These extra volumes would threaten naphtha cracker operators in Europe and SEA, and could lead to trade tensions between the US and these two other regions.

And can anything be agreed between the US and China that keeps all parties happy? No. The US may persuade China to buy more of its agricultural products and energy. This would avoid an immediate trade war.

But unless US concerns over allegations of Chinese intellectual property rights abuses, and state subsidies to hi-tech industries, are addressed then any deal will not be acceptable to the US trade hawks.

China cannot agree to such a deal as it would involve dismantling its new economic growth model. In so doing, China would be risking failure to escape its middle income track. It would be risking long-term economic stagnation.

A perfect illustration of this clash of world views came from former White House chief strategist Bannon. On Monday, he criticised Treasury Secretary Steve Mnuchin, who is largely responsible for calling a truce on the US-China trade dispute.

“They’re in a trade war with us and it hasn’t stopped. Mnuchin has completely misread the geopolitical, military, and historical precedence and what President Trump had done was finally put the Chinese on their back heels,’ he said.

US-China trade tensions seem certain to at the very least rumble away in the background, damaging global economic confidence.

Meanwhile, as hedge against being economically isolated from the US, China will continue to accelerate its Belt and Road Initiative (BRI). This will involve buying more PE from fellow BRI members, at the expense of the US.

Can the US also avoid a major fallout with the EU over trade? Relationships have already been damaged by the US steel and aluminium tariffs and the White House’s decision to pull out of the Iran nuclear deal.

As with China, a US-EU trade deal may avoid an immediate trade war. But the same problem could remain of whether a deal satisfies the interests of protectionists within the White House, and also President Trump’s core voters. The background fear of an eventual US-EU trade war may thus act as a further drag on the global economy, whilst also pushing the EU closer to China and its BRI.

I believe we have gone beyond a point of no return where public opinion has turned against single-use plastics. The shift in public opinion will lead to wave after wave of legislation that restricts the use of virgin polymers.

The brand owners, are of course very close to public opinion. They have as a result already responded to the sea change. Eleven major brands, including Coke, Unilever, Wal-Mart  and Pepsi – responsible for 6m tonnes of plastic packaging a year – are committed to using “100% reusable, recyclable or compostable packaging by 2025“.

And take note of these words from James Quincey, CEO of Coca-Cola, on the announcement of their new recycling policy:

“If left unchecked, plastic waste will slowly choke our oceans and waterways. We’re using up our earth as if there’s another one on the shelf just waiting to be opened. Companies have to do their part by making sure their packaging is actually recyclable.”

And what if legislators begin to charge petrochemicals producers for externalities – the cost of the environmental damage caused by plastics pollution? How will that effect the economics of petchems production? The Ellen MacArthur Foundation in a 2015 study wrote:

Legislation will require companies to monitor the life cycle, the environmental footprint, of every plastic pellet that they produce. No longer will their legal and ethical responsibilities end at the polymer factory gate.

These responsibilities will involve ensuring that each plastic pellet they produce is either re-used, recycled or converted into transportation fuels and naphtha. Financial penalties will be levied for every pellet that ends up being dumped into rivers or oceans – the externalities referred to by the Ellen MacArthur Foundation.

The end result will be a collapse of virgin PE demand growth as recycling increases. This  will of course add to the downward pressure on margins for polyolefins companies that stick with their old business models.