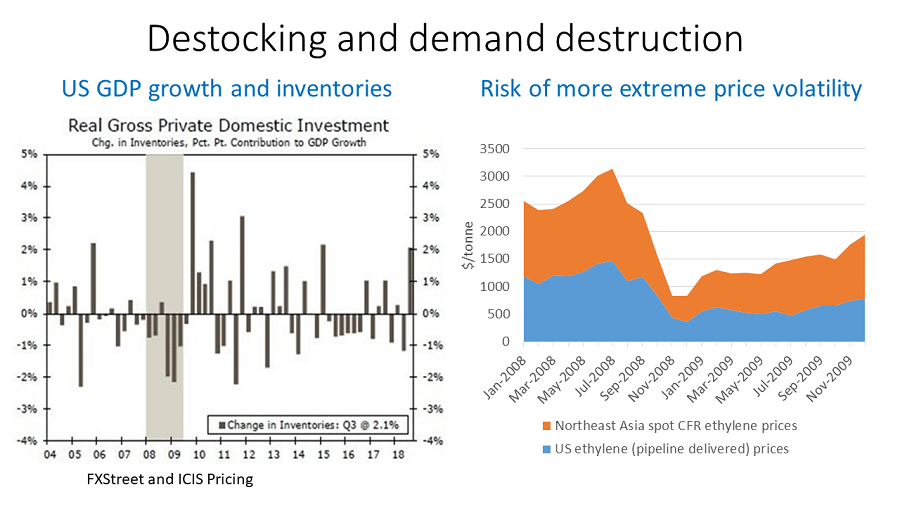 A FULL two percentage points of US third quarter growth of 3.5% was down to stock building. Total US inventories grew by $76bn in Q3 following a $37bn contraction in the second quarter.

The fourth quarter is always a period of destocking in the US and everywhere. This will combine with the big build-up in Q3 inventories to likely result in a fall in US fourth quarter GDP growth.

But the fall in US GDP growth over the next quarter and into next year will not just reflect these inventory distortions.

Manufacturers felt very confident to buy ahead of oil price rises in Q3 because of the buoyant economic mood. Record low unemployment, strong wages growth and a soaring stock market meant that purchasing managers had no problem in persuading their CEOs to part with the cash to build raw material inventories.

But this is a good as it is going to get for a long time in the US economy. Interest rates are rising, US stock markets are heading for further major corrections and the impact of the US China trade war/Cold War is only just being felt. Next year, the trade war/Cold War will get a great deal worse.

The immediate risk for chemicals companies is a repeat of the price volatility and inventory losses that we saw in 2008-2009 as destocking – i.e. a fall in apparent demand – combines with a fall in real demand.

The longer term challenges I have outlined below.

There were also some worrying early indicators behind the 3.5% US GDP growth number. As FXStreet writes:

New home sales tumbled for a fourth consecutive month in September, off 5.5% to a 553,000 sales pace, the slowest in nearly two years. In addition, there were downward revisions to data for previous months. Only the Midwest region saw a gain during the month.

Home sales in the South were off 1.5%, likely reflecting the impact of Hurricane Florence. Compared to a year ago, home sales were off 13.2%. The median sales price for a new home was down 3.5% Y/Y to $320,000. It seems that higher mortgage rates and high home prices are curbing demand.

The political pressure on the Fed to hold back on further interest rates is bound to build. Perhaps the Fed will yield, but there is no indication so far of that happening.

And even if this happens, the issue will remain the US budget deficit. The US needs to increase Treasury sales at a time of higher interest rates and weaker Chinese buying interest. Q4 could be significant because, as Citi notes, the quarter will see Treasury debt sales in the region of $350bn, more than a third of yearly supply.

Beyond this immediate challenge comes the issue of whether the corporate and government debt that has been built up since 2008 is as systemic a threat as the financial sector debt that caused the Global Financial Crisis.

Let’s assume I am wrong and there is no systemic threat to the global economy. This would still leave us with very little financial power compared with 2008 to deal with whatever the extent of the downturn in 2019.

China’s government, through its central bank, doesn’t have the capacity to repeat the scale of stimulus that we saw from early 2009 onwards.

The European Central Bank is facing major pressure from Germany not to repeat bail outs of deficit-busting fellow EU members.

The EU is also preoccupied with the immediate strain of the Italian budget and a very good chance that in March next year, Britain will crash out of the EU with no BREXIT deal. This makes coordinated EU-wide action to stem a fall in financial markets even more unlikely.

Crucially, also, the animus in international relations makes a repeat of 2008 very unlikely. In that year, the world’s major central banks worked very well together to limit the damage from the Global Financial Crisis.

But now the US is engaged in the trade war/Cold War with China, and has at best shaky relationships with the EU and other countries and regions.