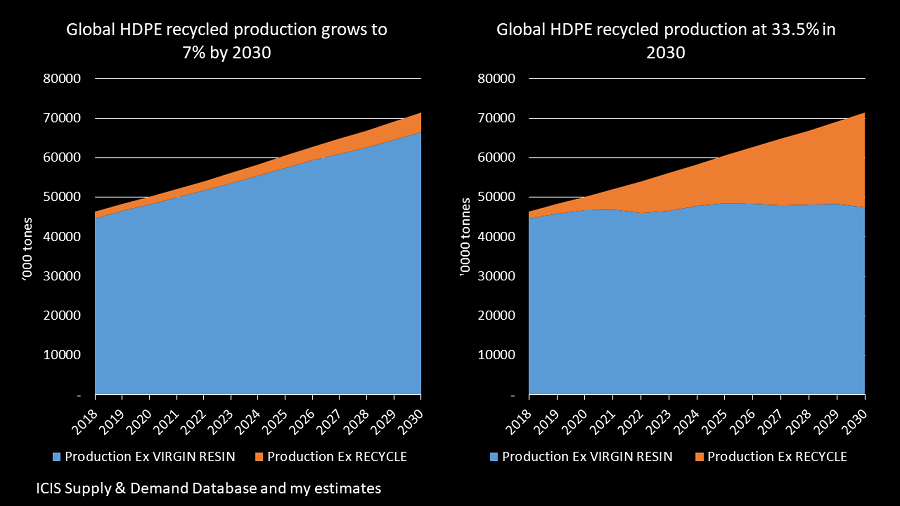 GLOBALLY some 75% of aluminium is recycled, 86% of steel and 40% of glass. Why shouldn’t the same levels of recycling eventually apply to some polymers?

A good example here is HDPE which is already the second easiest polymer to recycle after PET resins. As sustainability pressures build on the polymers industry, it seems reasonable to assume that mechanical recycling of HDPE will increase towards levels that already occur  in other materials

Using our Supply & Demand Database as a starting point, let’s think through what this could mean:

Tomorrow will not be the same as today

I worry that the global polymers industry could be sleepwalking into crisis. Some of the industry contacts I talk to consider rising sustainability pressures as a passing fad. They believe that public anger over plastic rubbish in the rivers and oceans will fade away, along with legislative pressure.

Another school of thought is that when the brand owners and retailers realise that is technically and economically unfeasible to greatly increase rates of polymer recycling without destroying the properties of end-use applications, they too will relax the pressure.

But here is a question: What was the world’s most popular smartphone app in 2006? The answer is there were no apps. As public and legislative pressure builds, so will the breakthroughs in the recycling of polymers.

We don’t know what will tomorrow’s technological solutions will be. But what I am convinced of is that public pressure over environmental problems in general will not going to go away. The pressure can only intensify. The problem of plastic waste in the world’s rivers and oceans has to be solved by the polymers industry.

And quite clearly, a loss of 108m tonnes of virgin HDPE resins production would change everything for the global PE business.