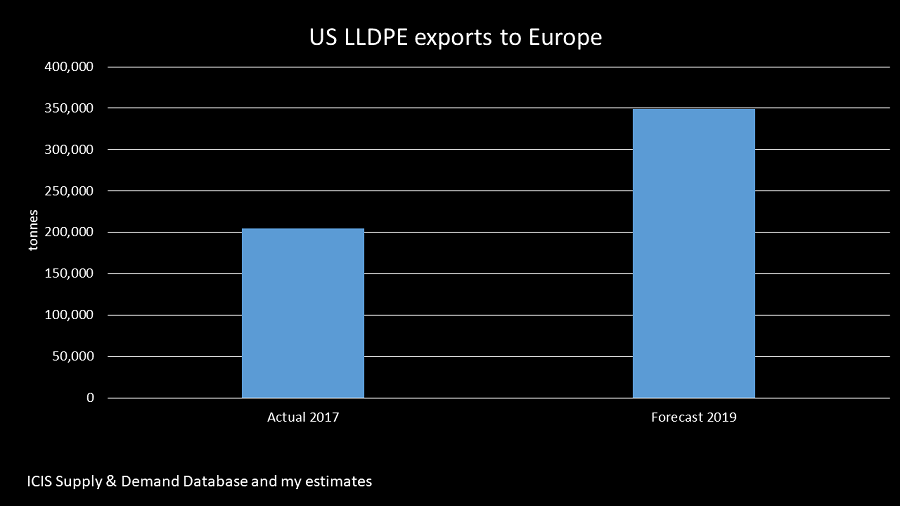 ON MONDAY I took the percentage shares of total US linear-low density polyethylene (LLDPE) exports in 2017 country by country and on this basis modelled what could happen in 2019.

Mexico, Canada, China, Brazil and Belgium were the top five US export destinations in 2017. Assuming, as I said, that the same percentage shares are repeated in 2019, exports to these five countries would have to increase by an average of 68%.

Take China out of the equation because of the trade war and Colombia moves into the US top five. Exports to Mexico, Canada, Brazil, Belgium and Colombia would have to increase by an average of no less than 75%.

This is mathematically impossible, with our without China. Take Mexico, for instance.

If you take China out of the top five US export destinations in 2017, the numbers look even more ridiculous. Exports to Mexico would have to jump to 915,263 tonnes when we estimate that Mexico’s total 2019.

It is obvious that even if the US is able to ship LLDPE to China in 2019, it will still have to substantially grow its market share in countries outside its top five destinations.

Who will be the most vulnerable?

Europe at most risk

Our estimate of net US exports in 2019 is around 1.2m tonnes. This feels an underestimate to me, based on the fall in imports as a proportion of exports during the first seven months of this year. So I am assuming net exports at 1.4m tonnes. Even this, though, could turn out to be an underestimate.

An end-result is the chart you can see at the beginning of this blog post. This is just a sample of a full list of all the net import countries I have compiled for 2019.

I have measured the growth in net imports, country by country, between 2017 and 2018 and percentage shares against the total.

I have next assumed that the US will evenly distribute its additional net exports in 2019 over 2017 based on these country-by-country shares of total import growth.

Markets never work like this of course – they are never this rational. But the exercise gives you an idea of the scale of the risks ahead:

I’ve chosen China and Europe as an examples because they will have the biggest percentage shares of global net LLDPE imports in 2019.

China will account for 48% of net deficits amongst the world’s net deficit countries and regions. Europe will be responsible for 18%.

No exports to China my base case

The US would struggle to raise net exports to China to 540,000 tonnes next year, even in an ideal world. It is reasonable to therefore conclude that the US wouldn’t be able to sell this amount of LLDPE to China, even in a perfect world.

The US would instead have to sell more elsewhere with Europe an obvious target. Other targets would include Turkey, which by itself will account for 8% of global net LLDPE deficits next year.

Indonesia and Vietnam seem likely to also be heavily targeted by the US as they have the biggest import needs in SEA.

We are not living in a perfect world because of the problems in emerging markets such as Turkey, Indonesia and Vietnam.

And my base case is that the trade war will continue throughout 2019. The might see a complete halt in its exports to China.

In such circumstances the knock-on negative impact on other markets would obviously be much greater, assuming that the US doesn’t delay new production.

Modelling this impact is too unreliable at the moment because of the number of variables involved. But watch this space.

Why did we end up this situation and what happens next? This will be the subject of my blog post on Friday.