….and oil consumption into petchems might even decline because of the plastics rubbish crisis 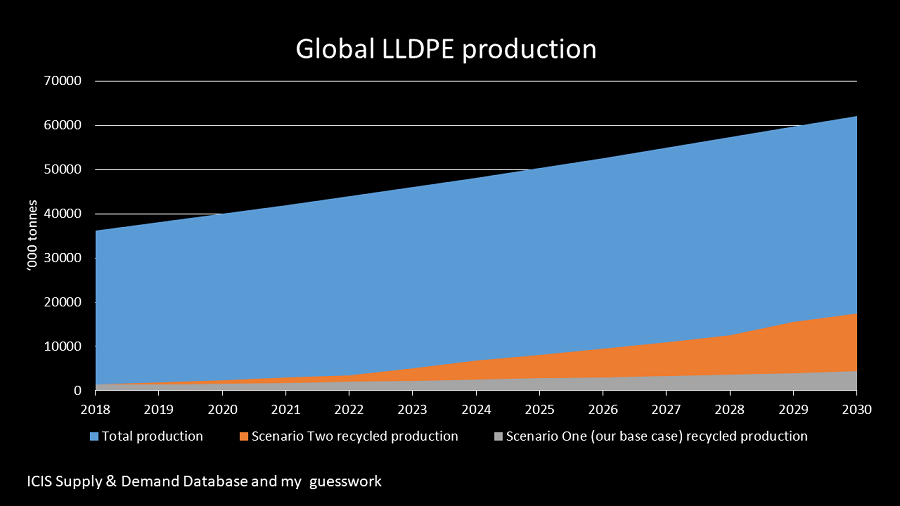 A new study by the International Energy Agency (IEA) suggests that in the world as it is today – the “known knowns” – petrochemicals as a driver of oil demand is set to take off.

Today, the petchems industry absorbs around 14%, or 13m barrels a day, of the world’s oil and 8% 300bn cubic metres of gas, says the IEA.

Of the nearly 10m barrels a day growth in total oil demand projected for 2030, petchems are set to account for 30% of oil and 7% of gas consumption – 850 billion cubic metres of gas, the study adds.

The EIA says that petchems will by 2030 become the main driver of oil demand, ahead of trucking, aviation and shipping. Petchems might thus replace lost demand for oil resulting from the rise of electric vehicles and shared mobility.

The IEA’s base case is that any fall in petchems demand in the West resulting from the pushback against plastic rubbish will be more than compensated for by booming demand in the developing world.

The study offers a different and preferred outcome – its Clean Technology Scenario – where urgent sustainability issues are addressed by petchems producers.

A decisive shift in public opinion

I believe, though, that we have already crossed the Rubicon and therefore challenge the IEA base case. Oil consumption into petrochemicals could, in my view, decline rather than increase by 2030. Or at the very least, we will not see the growth forecast by the IEA.

Public opinion in the West has shifted decisively against single-use polymer applications thanks to negative publicity such as that generated by David Attenborough’s Blue Planet 2 documentary.

The shift in public opinion is driving increasing legislation against plastic rubbish – for example, the EU Plastics Strategy which was announced in January.

People in the West are becoming increasingly aware that their efforts to reduce plastic waste at home will matter less than zero if parallel efforts are not taken in the developing world.

There is plenty of freely and widely available evidence of the scale of the plastic rubbish crisis in the developing world. For example, a recent study shows that:

I have been told that public pressure is already building on EU legislators to extend their legislation to the developing world.

Here is how this could work. A polymer exporter from Europe, or an exporter in another region such as the Middle East under European ownership, will be required to prove sustainable final disposable of their product in order to offset environmental taxes.

European companies may have to invest in developing recycling systems in the developing world in order to reduce the burden of taxes and in so doing gain a competitive advantage.

This explains initiative such as the one by Borealis in Indonesia. The global polyethylene (PE) and polypropylene producer – which has its roots in Europe – has linked up with Systemiq, a Circular Economy advisory and investment company, to establish a rubbish collection and processing system in in the city of Muncari in Indonesia.

The problem in much of the developing world is not the type of easy lifestyle choices we are familiar with in the West, such as whether to take a re-usable coffee cup to our favourite espresso bar rather than buy coffee in disposable cups.

It is instead the fundamental problem that in many developing countries there are no rubbish collection and processing systems at all. Many people have no choice but to dump their plastic and other rubbish straight into the rivers and the oceans.

Governments in the developing world are pushing back against plastic waste.

A watershed event was the January 2018 decision by China to introduce major restrictions on imports of scrap plastic from the West. From next year, my colleagues in China tell me that scrap plastic imports will be entirely banned.

Indonesia, which produces more plastic marine waste than any other country except China, has pledged to spend $1 billion to cut marine waste by 70% by 2025.

In India, 40% of plastic waste isn’t collected and so ends up blocking drains and causing city centre floods – not to mention, of course, India’s contribution to global marine waste. Twenty Indian states have, in response, banned some single-use plastics.

Returning to China, we switch into Rumsfeld’s “known unknown” category. We know that the Chinese government regards the plastic waste crisis as a major problem, which is evident from the ban on imports of scrap plastic.

What we don’t know is whether or not this will translate into a major government initiative to create a modern domestic waste-for-domestic-recycling industry.

Right now, the local recycling industry is highly disorganised as it mainly involves rural migrants in the big cities collecting waste plastic on bicycles, which is then delivered to low-tech small scale processors.

It is possible, though – in fact, I think highly likely – that billions of dollars of government money will be invested in creating a state-of-the-art local recycling industry. This investment could be announced as the 14th Five-Year-Plan (2020-2024), details of which are due to be released late next year.

Why do I think this is likely? Because the investment would tick three boxes for China. One, it would help solve the country’s chronic pollution crisis. Two, it would create a high value industry that would help China escape its middle-income trap. And three, it would improve China’s energy and petchems self-sufficiency as higher recycling rates would reduce the need to import oil gas, and polymers.

Issue is production as well as consumption

It might be fair to assume that as people in the developing world get richer, they will use more plastic. In many developing countries, per capita polymer consumer is way below Western levels, making the room for growth obvious.

From this it might be reasonable to argue that for every tonne of lost polymers demand in the Western world resulting from sustainability, two or more tonnes will be gained in the developing world.

But how will these polymers be produced? What we know is that there is already significant public and legislative pressure for new, more sustainable polymer manufacturing processes – and that this pressure will build.

Another unknown is whether the many technologies out there will work in producing polymers of high enough value from recycled material. There are many unresolved technical challenges. And we of course also don’t know what new technologies will emerge over the next decade or so.

The history of technological development is full of instances where when there is a need or opportunity technological innovation  follows.

In June 2007 the I-Phone was launched.  The following year, Apple launched its App store. Apps were developed to take full advantage of an existing technology – the smartphone. Apps have helped transformed the global economy.

What might this mean for polyethylene (PE) production via recycled material? Take a look at the two scenarios in the chart at the beginning of this blog post.

Scenario One, our base case, assumes that for one grade of PE heavily employed in single-use applications – linear-low density PE – global recycled production as a percentage of total production will rise from 4% in 2018 to 7% in 2030. This would result in recycled production rising from 1.4m tonnes to 3.4m tonnes.

Under Scenario Two – my pure guesswork – I assume that the percentage increases over this period to 28%. This would leave recycled production in 2030 at 17.4m tonnes. Maybe this is an underestimate?

Referring back to Mr Rumsfeld, what is important to understand about this debate is that we are only dealing with the known knowns and known unknowns. There are no unknown unknowns.

The destination is clear –i.e. solve the plastics rubbish crisis – even if we don’t always know what routes we are going to take to get there.