Why Trade War Will Continue Throughout 2019 And Impact On Polyethylene 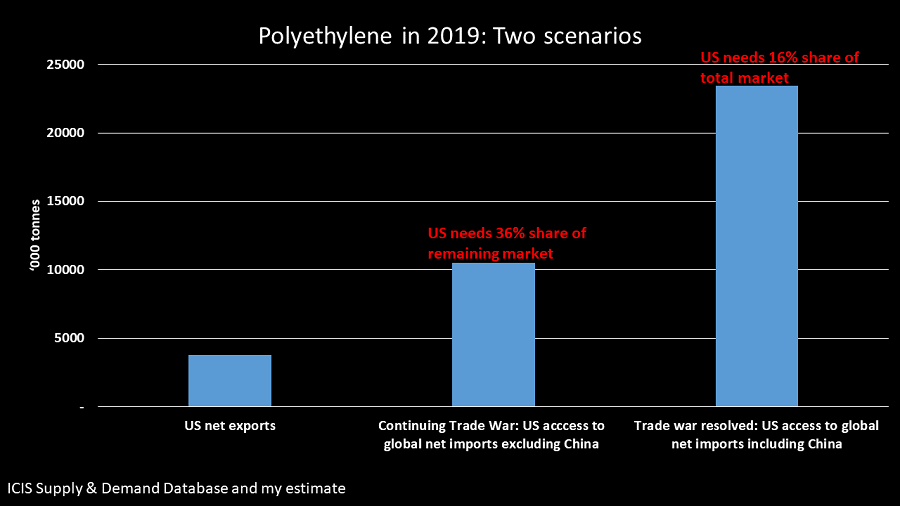 A MISCALCULATION by the White House could be one of several reasons why the US/China trade war continues throughout 2019 – and possibly even beyond that.

This is the idea that China is losing the trade war and so will soon be forced to the negotiating table with compromises that meet American demands.

The president’s senior economic adviser, Larry Kudlow, during a recent cabinet meeting, was quoted as saying that China’s economy “looks terrible, it is heading south.” This compares with US stock markets at record highs.

China’s economy doesn’t look terrible if you ignore the stock market which has a much lower participation rate than in the US. The main source of Chinese wealth is housing and so far, there has been no housing-market collapse.

What we have instead seen is a moderate cooling-off in the Chinese economy as a result of the trade war and Chinese government campaigns against bad debts and pollution.

Meanwhile, sales via the mobile internet continue to grow very rapidly as China leads the world in building a cashless economy in its developed provinces. Booming domestic consumption has for several years been a bigger driver of growth than exports that are now suffering from US tariffs.

Sure, conditions are likely to get worse in the second half of this year and 2019.  But the White House seems premature to suggest that the Chinese economy is already so stressed that China will be forced to meet US demands.

Let’s assume, though, that Kudlow is ahead of his time and that very soon, the Chinese economy will indeed be in a terrible state.

This, in my view, will still not bring China to the table because what the US is requesting of China is impossible. It cannot stop subsidising higher-value manufacturing and service industries with state money because this would jeopardise China’s long-term economic prosperity.

Meanwhile, President Trump may not be able to drop his insistence that China stops subsidies because this goes to the very heart of his America First strategy.

US picking its battle ten years too late

“Maybe you’re right, but this battle has come ten years too early for China. China doesn’t have the technologies, especially semi-conductor technologies, to escape its middle-income trap without US help. This will force China to make compromises and in 2-3 months this trade war will be over,” is an argument I have often heard

I disagree. I believe that the US has instead picked its fight with China ten years too late. China has made huge progress in higher-value goods and services over the last decade – for instance, consider the rapid increase in the number of Chinese patents.

The feeling on the ground in China is of a vibrant and increasingly innovative economy that has moved well beyond just copying other country’s technologies.

James Kynge of the Financial Times agrees with me. He makes the point that a decade ago few people would have predicted China’s strong positon in the global phone market. But last year, it had a 43% share of the global market through companies such as Huawei, Oppo and Vivo.

Where China lacks access to technology, the US isn’t the only option. China is said to be edging closer to Japan in an effort to get it to participate in its Belt & Road Initiative (BRI).

The same could apply to the EU, South Korea and the rest of the developed world if the BRI is increasingly viewed as a bulwark against the US approach to international trade. The calculation may be this:  “OK, the BRI is not perfect, but it promises to create the world’s biggest free-trade zone.”

What about the Chinese weakness in semiconductors? Five of the top ten semiconductor companies by sales in 2017 were American. But that is still only five. The rest were Dutch, Japanese South Korean and Taiwanese.

Further, as Kynge also writes: “Of some $300bn committed to help deliver Made in China 2025, some $150bn is earmarked to upgrade China’s capacity in semiconductors, according to Dan Wang of the research group Gavekal.”

China has already made major progress in the semiconductor industry. For example, the Huawei subsidiary HiSilicon is the world’s seventh-largest chip design company.

What further worries me is that the US dispute with China may not be just about trade. The Diplomat magazine writes that the trade war should be viewed more broadly:

“The trade war can be viewed as a paradigm shift of Washington’s China policy. Along with other recent developments in US policy, such as the Taiwan Travel Act passed in February and the passage of US Navy warships through the Taiwan Strait, the trade war is, in effect, part of a much larger strategy of hedging.

In other words this trade war could really be about geopolitics. The US may refuse to concede any ground because it has longer-term aims beyond just trade.

Implications for petrochemicals and polymers

It is important to look beyond just the effect of the Chinese tariffs on US petchems and polymers shipments to China.

This misses the bigger risk that as both sides dig in for a long trade battle, the Chinese government may actively encourage its citizens to boycott all US goods and services.

Even without this active encouragement, I have been surprised over the last week by the strength of anti US feeling amongst some of my Chinese petrochemicals industry contacts.

A scenario is that this leads to an almost complete stop in US petchems and polymers sales to China as a result of Chinese buyers avoiding US cargoes for patriotic reasons.

This might only happen in products where China can comfortably do without US supply. When you look at the data, though, this applies to a broad range of products including polyethylene (PE).

The US accounted for only 5% of total Chinese imports of 2017. This suggests that China would have little difficulty in finding alternative PE suppliers.

Let’s model what this could mean for PE in 2019 as US production increases on the biggest-ever wave of new US capacity:

And remember, do not assume that the US would revise-down PE production plans if it lost China. New PE plants may continue to run hard because of the need to get rid of surplus ethane as steam cracking is the only end-use market for ethane.

US natural gas producers need to dispose of big quantities of ethane before they can put methane into pipelines, and several of the new US PE plants are integrated upstream into natural gas.

Even in the best of economic circumstances, the type of market disruption implied by the above data would be big. Naphtha-based producers in regions such as Southeast Asia would be under severe pressure.

Meanwhile, US producers would fail to meet the earnings expectations they had set for shareholders that have justified major capacity additions.

Quite clearly, though, a trade war lasting the whole of next year would be a long way from the best of economic circumstances.

As always, I very much hope I am wrong. But once again, it is critically important to remember this: HOPE IS NOT A STRATEGY.