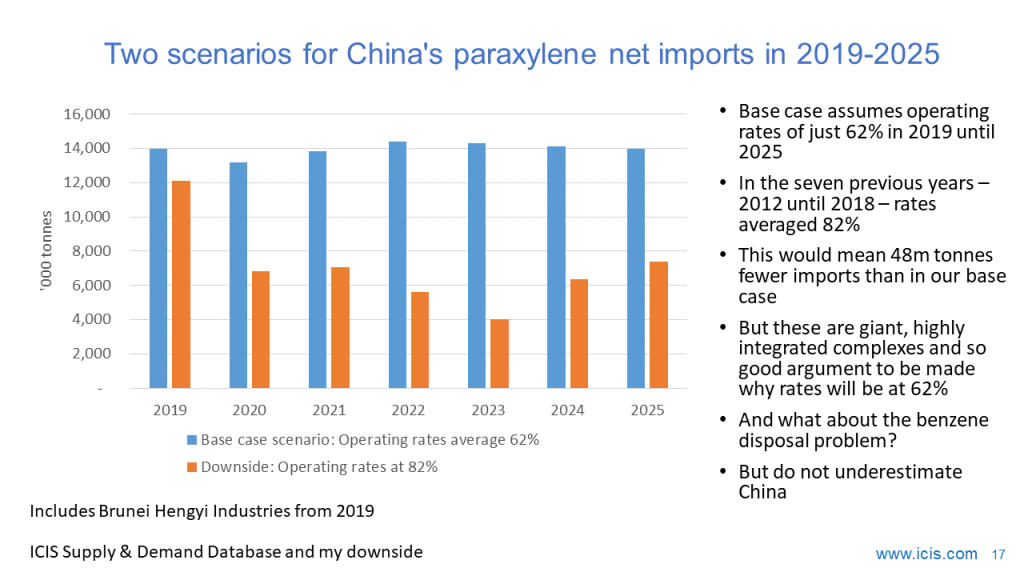 There is of course a very good chance that my  downside scenario will be wrong. It may be technically unfeasible for China to operate its new paraxylene (PX) capacity at 82% in 2019-2025, as opposed to what could turn out to be our sensible base case of 62%.

And what about the surplus benzene resulting from high PX operating rates? This would become a major disposal problem. Benzene margins would plummet due to reformers running hard to make the mixed xylenes feedstock of PX.

Complete self-sufficiency, even when you include the new Chinese-owned Brunei PX plant, is beyond China for the time being at least.

But even our base case fall in PX export dependency would still represent the latest chapter in a story that began decades ago when China became the workshop of the world for textiles and garments.

Then it moved into fabric production and next into polyester yarn and fibres output where it became completely self-sufficient.

Post-Global Financial Crisis, as the Chinese government made available vast sums of lending to boost manufacturing capacity in general for economic multiplier purposes, China’s imports of purified terephthalic acid (PTA) collapsed. In 2010, China’s net PTA imports were 6.3m tonnes. Last year, it was in a net export position of 57,603 tonnes.

Increasingly, though, textiles and garments factories will move from China to other countries with lower labour costs – and, as we all know, this process is already well underway.

As we move into a bipolar world, some of these new factories will be under Chinese ownership within the Belt and Road region. They will also very often receive their raw material polyester fibres from Chinese plants, with the economics of polyester fibre production in China strengthened by integration all the way upstream to PX.

As the Chinese economy matures, it makes perfect sense for China to improve its refinery-petrochemicals integration in this way. This is adding value to its economy as it tries to escape its middle-income trap.

This is always the context in why you must view refinery and petrochemicals investment in China. Think about headline government policy as well as cost-per-tonne economics.

And never, ever, as I said at the beginning, underestimate China’s ability to surprise on the upside through highly efficient execution of complex and big manufacturing projects.

By John Richardson THE ABOVE chart shows that in April the average spread betwee...

By John Richardson THERE are a lot of theories out there about why the spreads b...

By John Richardson THE PROPOSITION that petrochemicals and polymers demand in the developed will see...

China rapid rebound promises another great year for petchems, but beware of the fault lines

By John Richardson IT helped immensely that as the rest of the world was shutting down, China’s fa...

Retreat of globalisation and implications for petrochemicals

By John Richardson EVER SINCE the Berlin Wall fell in 1989, and the last great geopolitical struggle...

US polyethylene: resilient demand could be at risk from delay to new stimulus

By John Richardson THIS REMAINS a mystery that needs to be solved: why US polyethylene (PE) markets ...

By John Richardson THERE will be a lot of official data released about booming consumer spending dur...

Petrochemicals and autos: the last 50 years provide little guide to the future

By John Richardson IT HAS been an amazingly half a century of innovation for the petrochemicals indu...