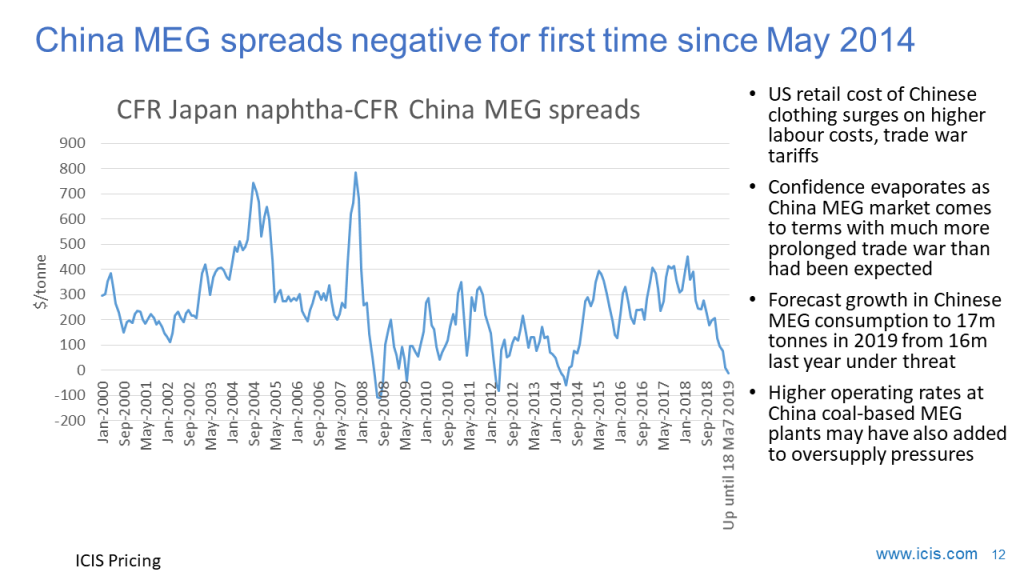 THERE are a lot of theories out there about why the spreads between Chinese mono-ethylene glycols (MEG) prices and naphtha feedstock costs have fallen in April and May of this year (see the above chart).

But as I shall explain in detail later on, the only explanations that entirely stand up are the blow to confidence caused by the extension of the trade war and a 171% increase in the cost of Chinese clothing in the US. This extraordinary increase in the cost of garments sold in Walmart etc. is the result of the long-running rise in China labour costs and  the recent US trade-war tariffs.

Let’s first of all deal with the other theories. Theory One is that the contraction in spreads is purely down to a seasonal lull in demand. In June and July, demand for textiles and garments in China tends to dip.

Theory Two is that because the US cannot export MEG cost effectively to China as a result of the 25% tariffs China imposed from August last year as part of the trade war, it has been forced to “flood Europe”. This has forced Middle East producers to divert cargoes to China that they cannot sell in Europe, also flooding the China market and causing excess inventories.

Iranian exports to China were at 65,505 tonnes in Q1 of this year compared with 37,011 tonnes in the first quarter of last year. But Kuwait’s exports were modestly lower. And most importantly, as Saudi Arabia is the biggest player in the China market, its exports only edged up to 1.1m tonnes in Q1 this year over 1m tonnes in Q1 2018.

Total Chinese imports were also only slightly higher in Q1 this year at 2.6m tonnes compared with 2.5m tonnes in the first quarter of 2018.

Let’s then deal with Theory Three. This relates to possible major technical leaps forward at Chinese coal-to-MEG plants. What could be an outdated view is that these plants are still running at low operating rates because the glycols they produce are low quality.

If we are wrong and these plants are running considerably higher, domestic supply may have surged, contributing to the fall in MEG spreads. I think, having talked to half a dozen inventory players, that Theory Three has some validity. I shall further explore this subject of a later post when I will examine the potential for shrinking China MEG imports in 2019-2025.

Theory Four is again wrong. The surge on oil prices and so naphtha costs in 2019 is said to be behind the weakness in MEG spreads.  But between January 2009 and August 2014, MEG spreads averaged $120/tonne when naphtha was at $838/tonne CFR Japan. In January-May this year, spreads have been at $61/tonne and naphtha at only $543/tonne CFR Japan.

Rising labour costs and US tariffs on Chinese exports resulted in the average US retail cost of a Chinese garment reaching $69.50 in Q2 this year, up from $25.70 in Q2 last year – a 171% increase, according to Sheng Lu, an associate professor of fashion and apparel studies at the University of Delaware.

“By the end of the first quarter of 2019, the number of apparel items made in China that were held in US clothing retailers’ inventories were down more than two thirds to 8,352 stock-keeping-units, an industry identifier that tracks the attributes of each particular garment,” writes the South China Morning Post.

This is despite April-May being peak seasonal months for US demand for Chinese garments.

If the US follows through on its threat to impose 25% tariffs on its remaining $300bn of imports from China, all of its apparel and non-apparel imports from China will be affected by the trade war. The additional tariffs could be in place from as early as July this year.

As with benzene, everyone was confident that a trade deal would be done and that the deal would boost China’s MEG market. Now, though, following the 5 May change in events, it is reasonable to assume no trade deal for the rest of this year – and possibly throughout 2020 as well.

Confidence has collapsed across many chemicals and polymers markets, with MEG especially vulnerable because China is a major exporter of textiles to the US.

If the global economy slows down because of a prolonged trade war this could have hurt China’s overall textiles exports – the biggest in the world. World Trade Organisation data show China’s textiles exports totalled $110bn in 2017. In distant second place was the European Union at $69bn.

And if the Chinese economy slows as a result of a prolonged trade war, local spending on non-essential clothing will drop. You don’t buy a designer dress, or even a cheap shirt you don’t really need, if you we are worried about the future.

Combine this with lack of real new economic stimulus in Q1 – and China’s limited capacity to further stimulate the economy during the remainder of 2019 – and growth up and down the Chinese polyester value chain will likely fall short of expectations.