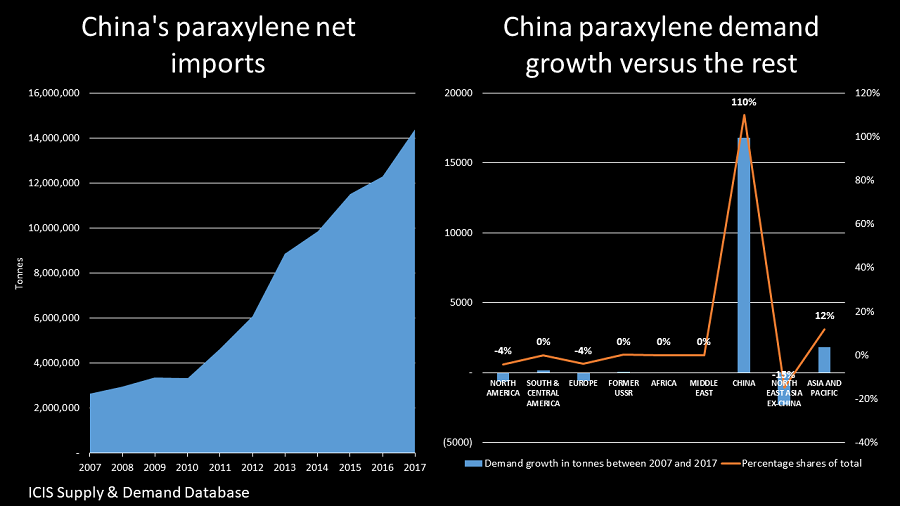 WOW, what an opportunity. That might be your reaction to the two above charts. On the left, you can see a quite breath taking rise in China’s paraxylene (PX) net imports (imports minus exports). In 2007, China’s net imports were around 2.6m tonnes of PX with last year’s total reaching 14.4m tonnes.

The chart on the right puts this into a global context. During the same ten years, China accounted for 110% of global demand growth. This statistical quirk was possible because of negative growth in North America, Europe and Northeast Asia ex-China.

The 2007-2017 decade was unusual because China rapidly raised its purified terephthalic acid (PTA) capacity whilst failing to come anywhere close to an equivalent increase in PX, which is of course a feedstock to make PTA. In 2007, PTA’s net import were at 7m tonnes whereas in 2017 they totalled just 15,000 tonnes.

China poured vast sums of economic stimulus into its economy in the years following the 2008 Global Financial Crisis to compensate for the impact on its economy of the crisis.

A lot of this stimulus money was spent on new industrial capacity, including in many petrochemicals, quite often in complete disregard to the long-term economic wisdom of the investments.

The priority was to build factories for the short term sake of building factories – i.e. the economic multiplier effect of the construction work.  In the case of PTA, lots of private polyester makers integrated upstream to their own PTA supply without going the further step to PX.

But China has long dominated global PX demand growth and this looks set to continue.

If you look at the ICIS Supply and Demand global consumption data for 1999-2006, you will find that 54% of global PX consumption was down to China. In a distant second place was the Asia & Pacific region at 20%. Asia & Pacific includes Southeast Asia and India.

If you then look at our forecasts for the ten years from 2008 until 2018, we expect that China will maintain its dominant global position. We forecast that it will account for 60% of global PX consumption growth during this decade, with Asia & Pacific again in a distant second position at 16%.

So, lots of people are getting excited about investing in new overseas PX plants to serve the China market on the basis that:

Even with lots of new China PX plants being plants, here’s the case for the status quo

But, and I am sure you guessed there was a “but” coming here, China is engaged in a major wave of refinery-petrochemicals investment at new state-of-the-art integrated petrochemicals sites. As I have discussed before, this could result in China more than doubling its ethylene capacity. And at these same sites will be a major wave of new PX plants.

Several of these new refinery-petrochemicals complexes will be privately owned, as the government has decided that the refinery business should no longer be dominated by Sinopec and PetroChina.

This is part of boosting the role of private companies in the economy. China hopes that more private investment will lead to the kind of innovative, higher-value manufacturing it needs to escape its middle-income trap.

On paper, China has enough PX projects to achieve self-sufficiency over the next decade, assuming that most of the projects are built and they run at high operating rates.

Many of these investments might not happen, though, because of the capital costs involved. China may decide it makes more economic sense to continue to import big volumes of PX.

Adding to the economic logic of this approach would be if China decides to import just about all of its PX needs from countries that are part of its Belt and Road Initiative (BRI).

The BRI is to include the world’s biggest-ever free trade zone. PX would likely arrive in China duty free, strengthening the case for building PX projects to serve China in the other countries that make up the BRI. The BRI includes the whole of the oil-rich Middle East.

Further, as China can no longer compete in low value textile and garments manufacturing on its east coast because of higher labour costs, textiles and garments factories could be relocated to countries such as Iran, a BRI member. Iran has a very youthful population and thus low labour costs – and also a major youth unemployment problem.

It could therefore work like this in the case of Iran, or another hydrocarbons-rich country with low labour costs:

Further, you can argue that the way refinery-product markets are developing in China make major investments in local PX capacity hard to justify.

China has in effect declared war on diesel because of the damage that diesel does to air quality. Diesel trucks and buses are being replaced by electric vehicles (EVs). China is also moving away from its investment- led growth towards a consumption-based economy. This by itself, even with without the shift to EVs, means less use of diesel in trucking and in small-scale generators.

This complicates the economic case for building enough new refineries, as these refineries may have no home for their diesel output (as a reminder, refineries also make heavy naphtha that feeds catalytic reformers. Reformers make the mixed xylenes that are then used to make PX).

Why China will become self-sufficient in PX

I disagree with this business as usual view and instead believe that China will become self-sufficient in PX, perhaps by as early as 2022.

China at the very top level seems to have changed its approach to petrochemicals. In the past, Beijing was quite content to live with major deficits in products such as polyethylene, polypropylene, styrene and mono-ethylene, as well as PX.

Now, though, it appears that the approach is to push towards self-sufficiency or even net export positions in the petrochemicals in which it has big deficits, with any surpluses exported along the highly efficient BRI trade routes to BRI member countries.

China is also eager to raise the economic influence of its private sector because, as I said, more private sector involvement will equal greater innovation – making it easier for China to escape its middle-income trap. So, if a PX plant is being planned by a private company, there is a good chance that will go ahead.

This still leaves the conundrum of justifying refinery investments if China’s diesel demand collapses, as I strongly suspect it will do.

Refineries globally, though, could be increasingly reconfigured to largely supply petrochemicals feedstocks. This is the direction of the National Oil Cos because of the long-term assumption that petrochemicals demand growth will be stronger than growth in oil-based transportation fuels.

China seems likely to follow this trend both at its existing and new refineries. Perhaps we eventually might see China building a grassroots refinery almost entirely based on supplying petrochemicals feedstock, similar to the Saudi Aramco-SABIC project already underway in Saudi Arabia.

Here is another option: It builds lots of new conventional refineries and exports the diesel and gasoline it needs tariff-free to fellow BRI member countries. Several countries in Africa are in the BRI and they are at a much earlier stage of economic development than China.

As these African countries industrialise their economies, they will need a lot more diesel, with factories making basic manufactured goods owned by Chinese investors. Africa is also likely to be behind the global curve on EVs, meaning a lot more potential for growth in gasoline demand.

Or why not just import the heavy naphtha to supply local PX plants from fellow members of the BRI? The naphtha might again be acquired on preferential terms because of Chinese equity ownership in overseas refineries. Importing naphtha rather than PX might be seen by Beijing as adding more economic value.

A combination of all the above appears likely because of China’s strategic priority to achieve PX self-sufficiency.

A change in top level thinking

I think there is also some very important general points here. In the past, you were able to safely assume that China would import ever-greater volumes of petrochemicals because it didn’t have sufficient access to petchems technologies and the expertise needed to build plants.

The approach from the central government was also very different. The priority was to keep imports flowing as China’s economic growth was based on processing raw-material imports into low value manufactured goods for export.

It didn’t matter to the government if China became ever-more dependent on imported raw materials, as the No1 objective was to create work for the vast number of migrant workers moving from the countryside to China’s coastal manufacturing plants.

Two things have since changed:

In the past, China’s lack of access to technology etc. led to great scepticism over announcements of big new waves of petrochemicals capacity. It was assumed that many of the announce plants wouldn’t be built. It was also assumed that where plants were built, they would run at low operating rates.

Analysis was built around the assumption that China would balance its petrochemicals production on what was being planned elsewhere in the world. In other words, it would not build where more viable import options presented themselves.

Now, though, I believe that we need to start from the premise of balancing capacity additions across the rest of the world based on what is being planned in China. We should assume that China is serious about many of its project intentions – and that when it has built new plants it will run them hard.

I could of course, as always, be wrong here. But what is not in doubt is that China is no longer as straightforward as it was a few years ago.

You have to start from the top level down, from the change in central government policy priorities, and understand how these changes are being applied at a petrochemicals industry level. You need to move away from a one-dimensional “China will always need lots of imports” approach.