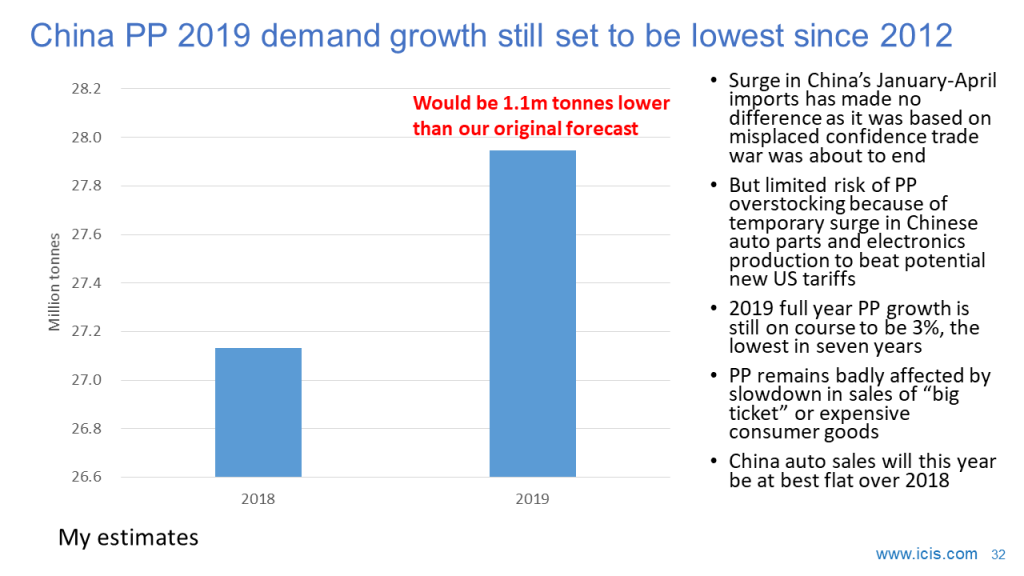 ALL is not suddenly right with China’s polypropylene (PP) demand despite our revised data for January-April 2019 indicating growth is back on target to hit our forecast for the full year 2019 of around 6%.

We had earlier placed January-April 2019 demand growth at just 2% compared with the same months last year. But at that stage we only had the net import data for January-February (demand is assessed by adding net imports to local production). We thus used estimated imports for March and April.

Since then of course the actual import data has become available and is much stronger than we had anticipated. In March, net imports rose by a big 33% over February to 394,737 tonnes. And they were up by another 5% in April over March to 414,244 tonnes. In January-April 2019, net imports totalled 1.5m tonnes, 12% higher than the same period in 2018.

There are three reasons for unexpectedly strong imports. Firstly, local production in January-April this year was some 300,000 tonnes less than we had forecast. This is largely because feedstock costs for China’s propane dehydrogenation (PDH)-based PP plants have increased. PDH-based PP plants will account for some 15% of this year’s estimated total PP capacity.

Feedstock costs for the PDH-based PP players are higher because of one of the many economic distortions caused by the trade war. From late August of last year onwards, China has been levying 25% tariffs on US propane imports. PDH-based players have as a result been forced to buy more propane from the Middle East. The cost of this propane is higher prices than US propane before the tariffs were imposed.

US exports of propane to China have collapsed, according to the latest US Energy Information Administration data, which is only up to January this year. In January, exports were at 698,000 barrels compared with a 2018 monthly average of 1.9m barrels. Market sources indicate that there has been no recovery in exports since January.

The second reason why there has been a surge in PP imports is that just about everyone, including me, thought that the trade war was about to come to an end. This led producers and traders to ship more PP to China in anticipation of a big economic recovery.

And thirdly, the consensus belief remains that China has launched a major new programme of economic stimulus. This is based on headline Total Social Financing (TSF) data for Q1 and the introduction of Yuan 2 trillion of tax cuts from 1 April.

But of course the trade war isn’t likely to come to an end following President Trump’s landmark 5 May tweet. US/China negotiations have completely broken down since then, and, as I have long predicted, the trade war has also morphed into a technology/Cold War.

There was no net economic stimulus from the increase in TSF in Q1. In fact, when you take into account the money spent on paying off bad debts, lending from the state-owned banks was down by 6% on a year-on-year basis. The bad debt crisis will seriously constrain the Chinese government’s ability to stimulate the economy during the rest of this year.

All the excitement about the Yuan 2 trillion of tax cuts has failed to take into account the obvious fact that the tax cuts mean less central government revenue. Reduced revenue will result in less financial transfers to the provinces to pay for building new roads, bridges and factories etc. The South China Morning Post writes that because of the tax cuts:

“All 31 provinces and municipalities of mainland China except Jiangxi province and the Xinjiang autonomous region have lowered their revenue growth targets for 2019.

“Local governments have accumulated Yuan 19.1 trillion  (US$2.8 trillion) of debt as of the end of February, as well as an unknown quantity of “hidden debt”, largely a result of central government priority policies handed down to boost growth after the 2008 global financial crisis.”

This chronic debt position makes the provinces, especially the rural poorer provinces, highly dependent on central government transfers, which, as I said, will decline substantially because of the tax cuts.

The problem for PP, much more than its sister polyolefin polyethylene (PE), is that most of its end-use applications are in “big ticket” or expensive consumer goods.

The fall in big ticket spending began in 2018 as China reduced the availability of new lending, with the US/China trade war adding further downward momentum.

This year the slowdown has continued because of the lack of real economic stimulus and the intensification of the trade war. You don’t buy a new car when there is lack of new credit and the trade war is making people worry about the economic future. Autos are the biggest single downstream application for PP in China.

China’s auto sales fell for the first time in 2018 since the early 1990s. In January-April this year, total vehicle sales were down by nearly 12% on a year-on-year basis, with April seeing a decline of no less than 17%. As I’ve been arguing since March, there will be no recovery in auto sales this year. This is now the official position of the China Association of Automobile Manufacturers which is predicting flat sales over 2018. But don’t be surprised if sales actually decline again.

Lack of availability of effective new economic stimulus and low consumer confidence are not the only reasons to expect another year of weak autos sales. Also consider the inevitable rise in China’s second-hand car market where sales are still only 60% of new car sales whereas in the West, second-hand car sales are 2-3 times new car sales.

Also think about the environment. The central government’s focus on boosting the car market has been largely targeted at electric vehicles, which despite very strong growth over the last few years, make up a very small percentage of the total number of vehicles sold.

Determination to press on with socially and politically essential improvements in air quality is indicated by the State VI vehicle emissions standard. Some three million cars are sitting unsold in inventories and need to be sold by 1 July, when the new standard comes into effect, as the cars only meet the State V emission standard. The value of this stock is placed at $72bn.

I believe that for all the reasons given above, we very probably reached peak new car sales growth in 2017. Growth will eventually return, but at much lower levels than in the heady 2009-2017 period.

There is some very temporary good news, though, as a result of another economic distortion caused by the trade war. As discussed yesterday, auto parts, TVs and washing machine etc. manufacturers in China are running flat out to produce goods for export to the US ahead of possible further tariffs. The US is threatening to impose 25% tariffs on a further $300bn of Chinese imports from as early as July.

This means that my estimated January-April 2019 estimate of excess demand over real demand – 286,287 tonnes to be exact – is unlikely to sit for too long in inventories.

Estimates of how much PP is imported by China for re-exports as finished goods range between 30-40% of imports. For argument’s sake, let’s take 35% away from this excess stock because of the boom in manufacturing to beat the threat of new US tariffs. You might end up with overstocking of 186,087 tonnes.

But I cannot see full-year PP demand growth in 2019 reaching any more than 3%. Let’s assume 3%. This would mean consumption at around 28m tonnes, 1.1m tonnes less than our original forecast. Three per cent growth would be the lowest growth in seven years – since 2012.

There is more good news, though. For every lost tonne of chemicals and polymers demand in China because of shortages of effective economic stimulus and the trade war, unexpected tonnes will be gained in other developing countries.

Manufacturing supply chains, as I discussed last Friday, are being increasingly shifted to other countries to avoid US tariffs. Most of Southeast Asia and some of South Asia appears to be benefiting. In Vietnam, this could mean that 2019 PE and PP demand growth is double what we had earlier forecast.

Quantifying these very important shifts in supply chains, and what it means for the global chemicals industry, will be a major focus of the blog over the coming weeks and months.

But there is, I am afraid, even more bad news. In 2018, China accounted for 37% of global PP demand, up from 24% a decade earlier. In 2009, China surpassed Europe to become the world’s biggest consumer of PP.

Can tonnes of PP demand that are gained in the rest of the developing world therefore replace lost tonnes of consumption in China in a sufficient quantity to keep the global PP industry in a healthy condition? Very probably not.