Trade war certainties: A bi-polar world and the overwhelming importance of Chinese demand 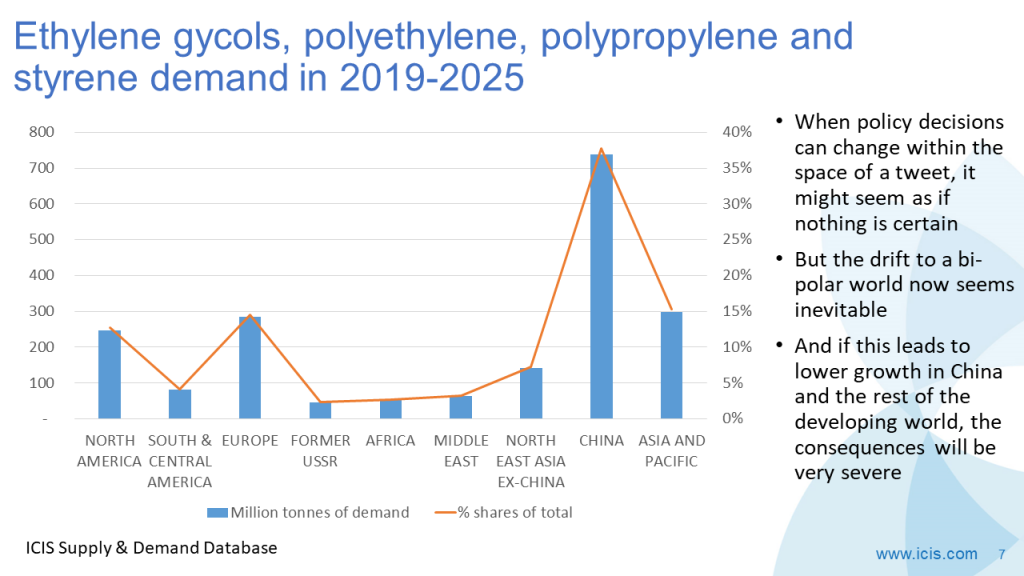 THE IRONY IS that if the US trade deficit with China shrinks because of the trade war, its deficits with other developing countries may continue to increase as manufacturing chains are shifted away from China to avoid tariffs.

Other developing countries are not only free of trade-war tariffs, but also have lower labour costs than both China and the US. The drift of low value manufacturing predates the trade war.

China has been very gradually, very minimally, losing market share in some industries for more than a decade because of a shrinking working-age population and thus rising labour costs compared with Vietnam and Bangladesh etc.

Like China, the US has an ageing native-born population. Without maintaining high levels of immigration, which is politically difficult at the moment in the States, is it really therefore possible for the US to compete in terms of labour costs with the whole of the developing world?

Thinking this through logically, therefore, the only way that the US might be able to bring low value manufacturing jobs in big numbers back to its shores would be to effectively wall-off the whole of its economy.

Tariff barriers may need to be equivalent in scale to those introduced by the 1930 Smoot-Hawley Tariff Act. This piece of legislation is blamed for turning a global economic recession into the Great Depression.

If the US extends tariffs as described above, we would very likely enter a deep economic downturn. US chemicals companies would find it much harder to export to developing countries ex-China as reciprocal tariffs would probably be introduced by the developing countries.

Or, as seems more likely, the US will surely focus only on halting the rise of China as the US will need friends and allies to achieve its objective. Under this second scenario, economic damage would still be significant but there would be no repeat of the 1930s. The US chemicals industry would not face tariffs from other developing countries.

But in this age of so many sudden policy changes, often by twitter, this step-by-step thinking may not give you all the scenarios that you need. This is one of the dilemmas facing the petrochemicals industry. Planning has probably never been as difficult in an environment where nearly anything seems possible.

In my view, there are some certainties, though, as I cannot see any long term rapprochement between the US and China – even if a temporary trade deal is reached.

One certainty is that we will continue to head towards a bi-polar world, with the US being at the centre one trading, technological and geopolitical bloc and China at the centre of another.

Another certainty is that China will move very aggressively towards petrochemicals self-sufficiency as it has no idea who its allies and adversaries will be over the coming decades. Nobody, in fact, knows which countries and regions will side with the US as opposed to siding with China.

Expect China to become entirely self-sufficient in polypropylene and styrene. And whilst it will still need to import mono-ethylene glycol and paraxylene, you should plan for significantly lower imports.

Also expect China to build closer relationships with the developing world, partly through its Belt and Road Initiative (BRI). The BRI often receives heavy criticism for cost and speed of implementation and “debt colonialism”.  But the BR will be improved and will be supplemented by other economic and geopolitical relationships.

Countries may be attracted by China’s vast domestic market and its ability and willingness to fund overseas investments in infrastructure, manufacturing and agriculture, even at the expense of not always entirely favourable terms set by China.

The US is of course still the world’s biggest economy, with, like China, a huge domestic market. It hosts more than 50% of the world’s cross-border internet bandwidth, venture capital and fund-management assets.

Some 88% of currency trades use the US dollar with most goods invoiced in dollars. It maintains an edge in technologies key to many major manufacturing supply chains and its security umbrella, through its unrivalled military strength, is vital for the security of many countries.

Countries will as a result face the difficult choice of either backing the US or China, as was the case during the previous Cold War between a US-led alliance and a Soviet Union-led group of countries. It will probably be impossible to choose favourable relationships with both the US and China.

The outcome will have huge, enormous, implications for the petrochemicals industry. It will entirely shape trade flows, profitability and investment plans.

As you can see from the above charts, in four of the key steam cracker derivatives – ethylene glycols, polyethylene, polypropylene and styrene monomer – we forecast that China will completely dominate consumption and consumption growth between 2019 and 2025:

Here is another certainty: If Chinese demand is at just a few percentage points below what we forecast because of the trade war, the knock-on effect on the rest of the global petrochemicals business would be enormous. This would be enough to  cancel most new investment plans.