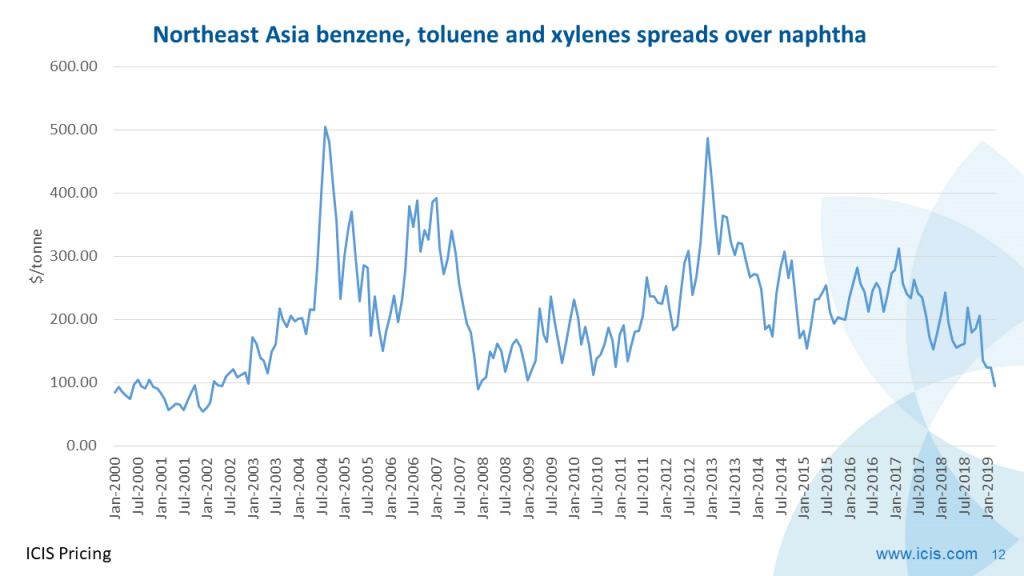 IF YOU only read the financial press and follow the stock markets you can be entirely forgiven for thinking that China’s economy has turned around as a result of huge injection of economic stimulus.

But anyone whose job it is to follow petrochemicals markets should know that the jury is still out on a real, tangible turnaround. Whilst pricing for some products has edged up, the above chart points to weak producer pricing power in the aromatics value chain.

The great thing about petrochemicals is that they often expose misleading economic narratives. Petrochemicals tell us what is really going on because they supply the raw materials for so many finished products.

As you can see, average spreads between benzene, toluene and xylenes prices and naphtha feedstock costs have fallen since December 2018. During March of this year, the spreads declined to their lowest level since May 2002. Butadiene spreads over naphtha had also declined. These trends have continued in April.

The data behind ICIS assessments of Northeast Asian naphtha-based variable costs high-density polyethylene (HDPE) and polypropylene (PP) margins reflect the fall in spreads. In 2019 up until mid-April, returns from selling all co-products (aromatics, butadiene etc.) were down versus the full-year by 18% in the case HDPE and 22% for PP.

This was versus 12% falls in the feedstock costs for making a tonne of HDPE and PP. So clearly, weak aromatics pricing power predates the recent run-up in oil prices.

Also consider that our analysis shows HDPE and PP prices falling faster or in line with the decline in raw material costs. HDPE prices up until mid-April were down by 14% with PP prices 12% lower. This implies the lack of pricing power also applies to polyolefins.

In PP, as I discussed last week, January-April demand in China was at 9.3m tonnes, some 300,000 tonnes lower than we had forecast.

This has obviously translated into lower margins as the chart below illustrates. 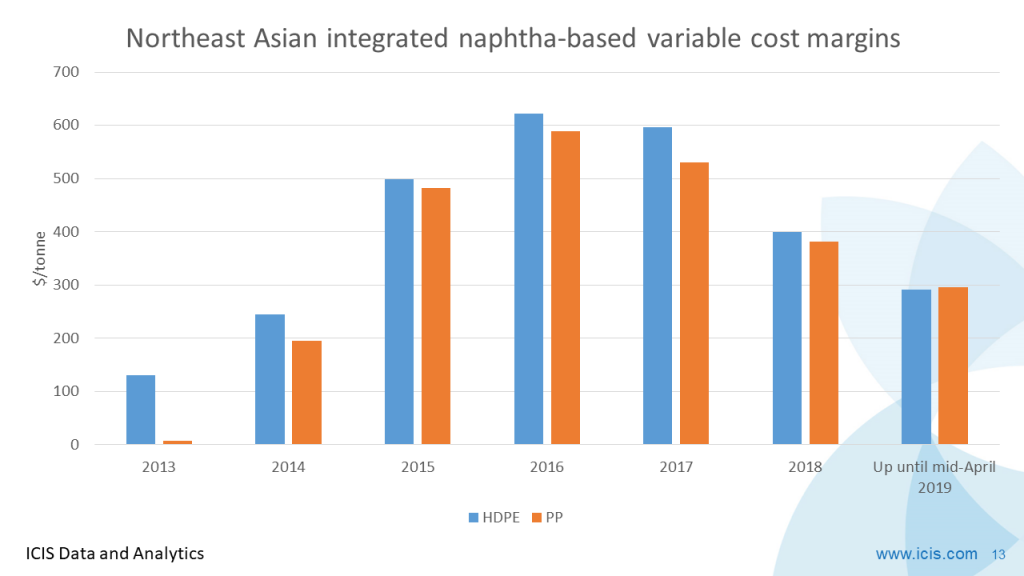 Our China demand data for benzene and styrene further point to how overstocking is responsible for the weak pricing position of the aromatics producers.

If you look at the Q1 benzene demand data (net imports and local production), this implies full-year 2019 demand of 16.4m tonnes, some 705,000 tonnes more than we had forecast – in other words, perhaps 705,000 tonnes of overstocking.

In styrene, the Q1 numbers suggest full-year 2019 demand of 11.7m tonnes – 1.1m tonnes more than we have forecast, and so, again, possibly 1.1m tonnes of excess inventories.

Move downstream from styrene into its derivatives and there are again indications contrary to an economic recovery. Our Q1 data suggest a 5% decline in acrylonitrile butadiene styrene demand for the full-year 2019. Polystyrene growth remained positive but was 3 percentage points lower than last year.

This reflects what’s happening downstream in finished goods where there is talk of a recovery, but it has yet to materialise.

Take auto sales as a very important example given that autos are major consumers of petrochemicals. China’s car sales in Q1 were 11.3% lower following the fall in sales last year, which marked the first annual sales decline since the early 1990s.

Digging behind the lending data

But there is a lot of optimism that auto and other retail sales will bounce back thanks to the injection of 2 trillion Yuan of tax cuts into the economy. These include a cut in the VAT rate for manufacturers from 16% to 13% which has prompted auto makers to lower their vehicle prices.

The apparent big jump in Total Social Financing (TSF) in Q1 is also a reason why the cheerleaders are getting excited. Year-on-Year TSF was up by 48% which compares with the 37% full-year rise in 2016, during the last big stimulus-driven boom in the Chinese economy.

Dealing with the tax cuts first, their benefits could be more than cancelled out by a decline in local government revenues, especially the revenues of the poorer inland provinces, argues the South China Morning post.

Lower tax returns will mean reduced transfers of funds from the central government to the provinces, resulting in cutbacks on infrastructure spending and on building new factories. Growth will obviously suffer.

The apparent jump in TSF (a broad measure of lending and economic activity) is misleading because from September last year, the People’s Bank of China has changed the way it assesses TSF. From that month onwards loan, write-offs have for example been included in TSF. On a real basis Q1 official bank lending fell by 6.1% in Q1 and money supply rose by just 0.4%.

This seems to confirm my argument that most of the extra money pumped into the economy during Q1 went into preventing more private and state-owned companies from defaulting on their debts, rather than into new economic activity.

The above data point to no big uptick in manufacturing activity and retail sales, just the expectation that one is around the corner, hence benzene and styrene overstocking (higher oil prices are of course also a factor).

Perhaps a recovery will happen, and a big recovery, if and when the US and China sign a trade deal. I attach a more than 60% probability that a deal will be done over the next few months, even though it’s unlikely to last more 1-2 years because of the unbridgeable gap between the US and China.

At least in the short term, though, expect real, tangible rebound in petrochemicals demand if a deal is signed.

But I maintain that this would be followed by renewed credit tightening in China, either in H2 this year or in 2020, as Xi Jinping and his fellow reformers press ahead with their struggle against bad debts.

So expect petrochemicals demand to decline after the initial euphoria of a trade deal. But this is a great deal better than the alternative, which is of course a continuation of the trade war.