Just to stress  that, as always, what follows are my own personal views and not those of ICIS 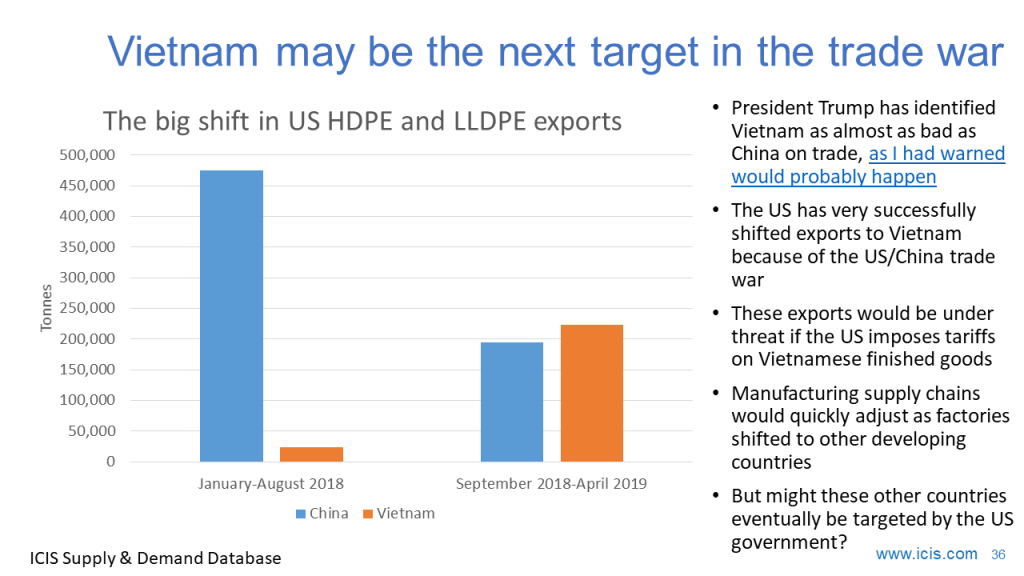 DON’T say I didn’t warn you. Three weeks ago I said that Vietnam could well be dragged into the trade war.

“A lot of companies are moving to Vietnam, but Vietnam takes advantage of us. So there’s a very interesting situation going on there,” said President Trump yesterday, during an interview with Fox Business News.

Asked whether he wanted to tariff Vietnam, Trump did not say no.

The president’s comments are in line with reports that plastic converters are increasingly shifting from China to Vietnam in order to manufacture finished plastic products for export to the US. This avoids the tariffs the US has imposed on Chinese exports of plastic products.

Some of the converters that have reportedly relocated to Vietnam are said to have remained under Chinese ownership.

The difficulty for the US is that it has an ageing native population and so lacks enough young people to work at low-enough wages to compete with the developing world. This could be solved through increased immigration, but that is politically difficult right now.

Would more immigration even work given that the US is so developed? In reality, the kind of low value manufacturing jobs that President Trump wants to bring back to America may have gone for good.

If the US places tariffs on Vietnam, global supply chains would once again re-adjust as manufacturing shifted to the next cheapest and most efficient set of locations.

China would very probably retain ownership of a large slice of this manufacturing, no matter where it moved to in the developing world, for the following reasons:

Or if course the hint of tariffs on Vietnam may come to nothing. But at some point the US will still have to decide this:  Is the trade just about restricting the rise of China or is it also about re-shoring large numbers of low-value manufacturing jobs?

If the trade war is about both taking on China and re-shoring jobs, the only logical approach would be to impose tariffs on all developing countries.

Back to polyolefins. The US has very successfully raised exports to developing countries other than China since September of last year. In late August, China imposed 25% additional import duties on US cargoes of high-density PE (HDPE and linear-low density PE (LLDPE) as part of its response to US tariffs on its finished goods.

If the US did impose tariffs on Vietnam, the Vietnamese economy would surely suffer, reducing what has been stellar demand growth for PE so far in 2019. Lower demand growth would mean less demand for US material, forcing US PE producers to target other developing countries. But what if these other countries were also then hit by US tariffs?

The US is dealing with these sales and marketing difficulties during a period of major capacity expansions.