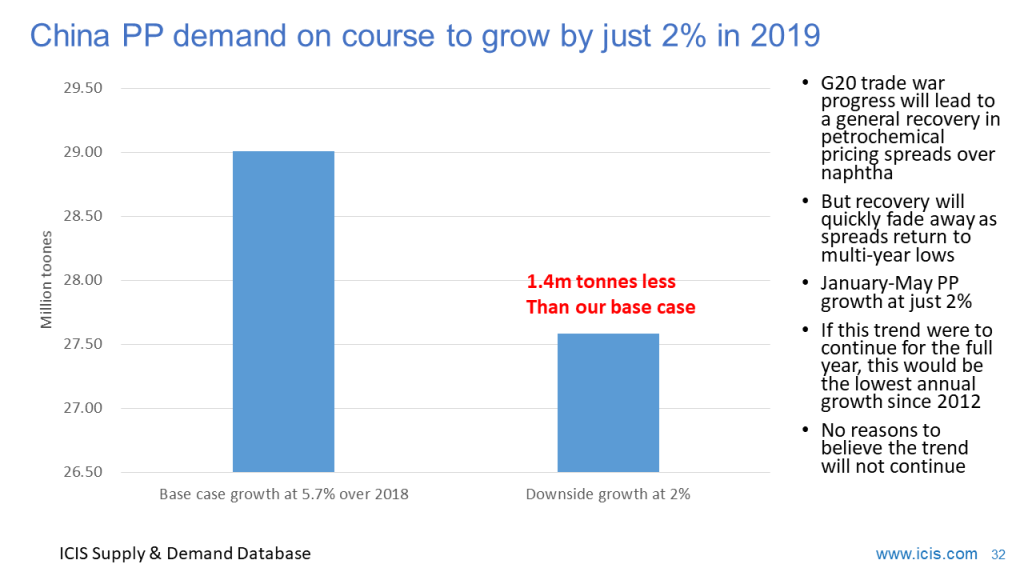 China petrochemical and polymer price spreads over naphtha feedstock costs will rebound over the next few weeks as a result of events at the G2o meeting in Japan. The US has agreed to resume trade talks with China and pause on imposing any more tariffs on Chinese goods.

Buyers of petrochemicals and polymers will be a little more willing to build inventories in some value chains where overstocking isn’t a problem. Producers will as a result gain a little more pricing power.

The improvement in spreads will act as a further reminder that spread analysis remains the single best means of gauging the health of the petrochemicals industry.

But we are not out of the woods yet. Far from it. To stretch the old cliché further, we have only just walked past the first few trees as we enter a new era of great power competition.

The US and China are still locked in geopolitical disputes over for issues such as China’s increased presence in South China Sea.

President Trump surprised everybody during the G20 by reversing course on the ban on US companies selling products and services to the Chinese tech giant, Huawei. But that’s gone down badly with hard line Senators. His promise to Xi may not get Congress approval.

This tells us that despite the pause for breath in the trade war the US and China remain on course for a Cold War and a war over access to technology.

As for the trade war, US tariffs on $200bn of Chinese imports remain in place, as do Chinese tariffs on US imports including a range of petrochemicals and polymers such as methanol, ethylene glycols, HDPE, LLDPE and PP.

Only a brief recovery in spreads

Because this is only a pause for breath in the trade war and because, as I said, we still face a Cold War and a technology war, I cannot see a big recovery in “big ticket” or expensive goods in China such as autos.

“Why would anybody suddenly want to go out and buy a car, let alone a new house, when they know the US President could so easily change his mind? I don’t see any recovery in demand as long as the tensions between the US and China remain,” said a Shanghai-based executive with a polyolefins producer.

The weak Chinese consumer markets are not just the result of the US and China trade tensions. The availability of credit in China remains constrained as the Chinese government continues its battle against bad debt

So expect the recovery in spreads of Chinese pricing over naphtha to quickly fade away as petrochemicals buyers realise that real demand hasn’t recovered. Spreads for key products such as benzene, mono-ethylene glycol and PE will quickly return to multi-year lows.

A fall in May imports over April and a downward revision of our estimates for local production are behind the fall to just 2% growth compared with 6% growth in the January-April period.

If 2% ended up being full-year growth, and I see this as perfectly possible, consumption would be around 1.4m tonnes less than our base case forecast in the ICIS Supply & Demand Database. Two per cent would also be the lowest annual growth since 2012.

As later blog posts will detail, it is the same pattern in acrylonitrile butadiene styrene, expandable polystyrene and styrene butadiene styrene. January-May demand growth remained low with no realistic prospects of major recoveries.